Charity and Avarice: The Roots Of Good and Evil

Charity and Avarice: The Roots Of Good and Evil May 3, 2017 Henry Karlson

Patheos Explore the world's faith through different perspectives on religion and spirituality! Patheos has the views of the prevalent religions and spiritualities of the world.
A common bond which connects the saints is that they lived their lives not for themselves, not for selfish gain, but for others. Charity (caritas, love) was the means which they became holy. For many, when they understood this call to caritas, their immediate response was to divest themselves of all their worldly goods, giving what they have to the poor and needy. In doing so, they found their first real sense of peace. They had opened themselves up to others, and in doing so, they found themselves freed from the attachment to the world that they had before their journey into holiness. What these saints discovered is that the path to salvation took on a serious, but graceful turn, when they followed Christ by dying to the self. The love of money, a root of great evil, was overturned by them because they gave up the pretense of control over money, realizing that it was to be used for the sake of others and not collected for the sake of personal luxury.

This is exactly what the spiritual life entails. We must discern what would lead us away from God, that is, what causes us to do evil, and overturn that cause, doing the opposite of it, so that we can enter the path which God would have us follow. We are to die to the self, to put ourselves on the cross, divesting ourselves of those attachments which keep us stuck in the mire of sin instead of being open to the bounty of God’s grace.

What our capitalistic society needs to learn is that the love of money is a root of all evil. This must be understood as a given, revealed to us as a truth in Scripture if we have not yet experienced this in fact. Yet, it should not be hard to see how this can be proven true when we look at those who idolize money. They see it as the greatest good, as that which they want to attain above all other things, so not only will they do all they can to get as much money as they can, they will see those things which allow someone to attain it must therefore be good. They will then begin to question what gets in their way of profit, as we can see in those stockholders who question why businesses must put workers ahead of their profits.

Avarice will not let us look to the good of others. It will not us, if we caught in its clutches, to see the needs of others as moral obligations, because the attainment of money, not the good of others, is what it tells us is our obligation. Thus, it can be said, those who are caught up in the love of money will see all things, interpret all things, in the light of their love, that is, money. Those who are said to be good are those who have money, while those who do not, must be bad because they are lazy and worthless.  Social justice and charity are to be rejected because they seek to counter the justice of money, the justice of Mammon.

We must understand that the love of money leads to personal and social destruction. Society cannot exist with it as its foundation, because those who have money will be able to use what they have to get more, keeping it out of the hands of others. Slowly but surely, the money will be slowly taken out of circulation, and then society, without proper economic flow, will collapse in on itself.  Likewise, on a personal level, we must realize there is no consistency with money; fortunes come and go, and those who worship it will find their god very capricious; what is given one day will be taken from them the next. While there might be momentary pleasure, there is no long-term peace; money can buy short term happiness, but eventually that will not be enough, and what little peace someone has will either be taken away as they lose their money or it will be sacrificed for the sake of making more money, showing that the only good money can offer is more of the same, more money.

The saints who detached themselves from their worldly goods, from their material abundance, made sure they would not allow money rule their hearts.  They showed us that the path of salvation lies in reversing the temptations of the world. As the love of money is a root of great evil, charity is the root of virtue, the foundation by which true goodness can be found in the world. Charity begins by dying to the self so that one can freely give oneself to all others out of love. The saints learned this and found the peace which this brings. Let us, likewise, walk away from the temptation of avarice and live our life as a life full of charity, giving ourselves up to others, so that in dying to the self we will find true life, and with it, the happiness which is found only in caritas. Then we can find ourselves walking the path of the saints and joining in with them as a cloud of witnesses to the truth which overcomes all evil, the truth of love which leads to the good which has no end. 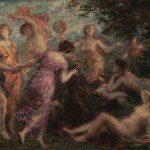 May 1, 2017
Even In Silence, There Will Be Temptation
Next Post 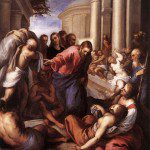 May 5, 2017 The Sunday Of The Paralytic Man
Recent Comments
0 | Leave a Comment
Browse Our Archives
get the latest from
A Little Bit of Nothing
Sign up for our newsletter
POPULAR AT PATHEOS Catholic
1 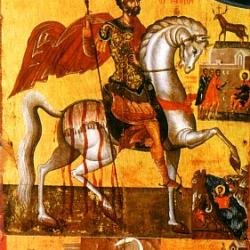 Catholic
The Legend of St. Eustathius
A Little Bit of Nothing
TRENDING AT PATHEOS Catholic