On the Eucharist: Part One

In our core, we thirst, and we receive the stream of living water, the Holy Spirit; likewise, we hunger, and receive the bread of life, by which we are able to partake of eternal life. Jesus said that he is himself that bread of life; he is the one who has come down from heaven in order for us to partake of him. In this manner, we can abide in him as he abides in us, and so we share in his infinite potential and life in a way which whatever we need, we can have from him and so never suffer loss:

“I am the living bread which came down from heaven; if any one eats of this bread, he will live for ever; and the bread which I shall give for the life of the world is my flesh.”

The Jews then disputed among themselves, saying, “How can this man give us his flesh to eat?”  So Jesus said to them, “Truly, truly, I say to you, unless you eat the flesh of the Son of man and drink his blood, you have no life in you; he who eats my flesh and drinks my blood has eternal life, and I will raise him up at the last day. For my flesh is food indeed, and my blood is drink indeed. He who eats my flesh and drinks my blood abides in me, and I in him. As the living Father sent me, and I live because of the Father, so he who eats me will live because of me. This is the bread which came down from heaven, not such as the fathers ate and died; he who eats this bread will live for ever” (Jn. 6:51 – 8 RSV).

Even in the way he came to us in his birth, he revealed to us that he came to give us of himself as the bread of life. As St. Anthony of Padua explained, the incarnation works in and through fitting symbols which reinforce each other, and here, we find Jesus being born in Bethlehem hints at his being the bread of life:

He is also called a “Bethlehemite’. Bethlehem means ‘house of bread’. He feeds us in the Church with the bready of his Body:

Jesus was born in the house of bread, to be the true Bethlehemite, indeed, to fulfill the meaning behind Bethlehem itself. He came to the world, not in some ordinary home, not even in an ordinary room at some inn, but in a manger, fulfilling what it means to be a Bethlehemite, for the manger is the place in which food is stored for animals. We are, to be sure, animals ourselves, and by coming to Christ, we come to the manger to feed. Jesus remains every in the manger as he is our food, the bread of life which has come down to the house of bread, so that we might live forever. We are nourished by the flesh and blood of Christ. Even as an infant, he was put on display in a trough. He came down from heaven and immediately showed he was to give of himself to us as our feed.

In receiving him, we are received by him; by eating the gift of the bread of life, we discover what eating itself is all about.  Normally what we eat becomes a part of us as we absorb what we can receive and expel that which we cannot. By receiving the eucharist, we have Jesus’ presence in us, and we find ourselves receiving the medicine of immortality, the food which transforms us into the body of Christ. But instead of absorbing Christ in us, we find ourselves being taken in by Christ and become one with him in and through our reception of his holy gifts. We truly find ourselves abiding in him because we first opened ourselves up to let him abide in us. By accepting him, by eating his gift of himself found in the eucharist, we find he has entered us and transforms us. Thus, he is not consumed like simple food, but nonetheless, he still allows us to become what we eat, himself, as Hugh of St. Victor explained:

Christ takes what humans need in order to survive, food, and turns himself into it in order to fulfill the human condition and lift it up so that all that is truly and properly human finds itself received by him as a means of receiving him.  Our body is real and represents a truth about ourselves which must not be denied. We are not Gnostics rejecting the functions of our body. All that Christ assume is itself able to be transformed by him and used by him for our gain.

As that which we eat is from what has been killed and so dead, we receive the lamb of God slain from the foundation of the world, from the one who died for our sake, so we can eat him and receive everlasting life. Ordinary food helps us in our temporal existence; our spiritual food of the bread of life, of the flesh and blood of Christ offered for us, gives us what we need in order to ne nourished in eternity.

He made it clear through repetition that he truly wants to believe he is the bread which has come down from heaven, that he truly came to give us his flesh and blood to eat and drink. He did not want us to think it was mere metaphor: he had many chances to indicate it was, but instead, through his repetition and how he declared himself to be the bread of life, he became more emphatic about it. We cannot neglect the meaning which he gave; we can dismiss it as absurd, and so dismiss him, but he did not offer those who believed in him and followed him any other choice than to accept this hard saying.

What Moses gave was food for the journey of life; it was manna from heaven which was good and helpful; but what Moses gave was only a foreshadow of what God sent to us in Jesus, so that we have food, not just for a particular day and time, but for eternity – the difference between the two is night and day, with Moses giving a shadow of the things to come:

Clearly, what Jesus said shocked his listeners; after he made sure they knew how serious he was by the emphasis he put in his words, many of them left (cf. Jn. 6:66). They, like so many others throughout the centuries, could not understand how and why we would be called to eat Jesus himself. It sounded like cannibalism. At least for those listening to his speech here, since he had yet to explain how he would offer himself as good, it is far easier to forgive those who departed at that point than those who later rejected his words after he revealed how he was to give himself in holy communion. What were the disciples to believe? How could they understand his enigmatic and cryptic words?  Obviously, those who had already come to know and love Jesus knew he could be enigmatic, that his words could be filled with paradoxes which they could not comprehend. Thus, they continued to follow him even when others rejected him due to such confusion. They had already seen the glory of God manifested in him, attracting them to him, bringing out their love and acceptance of him, so that they could come to him in a faith which was open to the truth and the awareness such truth gave to them. They could know the truth even if they could not comprehend it; they could accept the truth and contemplate it with human reason, to see a kind of logic associated with it even if they saw the limits of human logic as it came face to face with the face of truth in Jesus himself. They continued to follow him even when he challenged them, but others, as soon as they found themselves challenged, left grumbling (cf. Jn. 6:66). 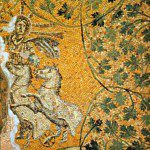 July 5, 2017
In Realizing The Weakness Of Self-Power, We Open Up To The Real Power Of Love
Next Post

July 12, 2017 On the Eucharist: Part Two
Recent Comments
0 | Leave a Comment
"Eh, the State is not inherently ordered to the common good. It's nice when it ..."
Ame Engaging The Common Good Is One ..."
"Definitely, we might be in a better way today……or aren’t you aware of the legacy ..."
RPlavo . Killing Is Not Good
"And you would rather they support Gore?"
Tom O. Killing Is Not Good
"Funny no encyclical ever on the Sabbath being instituted for our sake"
RPlavo . Proper Worship Embraces Love, Not Selfishness
Browse Our Archives
get the latest updates from
A Little Bit of Nothing
and the Patheos
Catholic
Channel
POPULAR AT PATHEOS Catholic
1 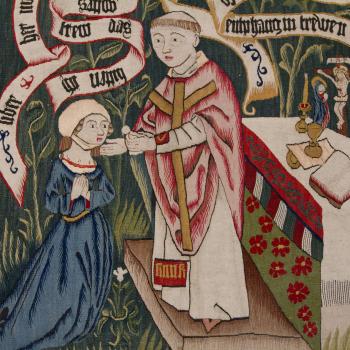