We Must Have Times For Community and Times For Silence

We Must Have Times For Community and Times For Silence August 18, 2017 Henry Karlson 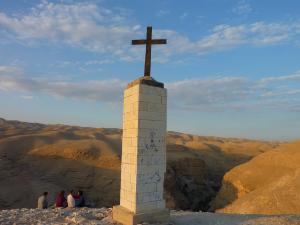 Abba Anthony once went to visit Abba Amoun in Mount Nitria and when they met, Abba Amoun said, “By your prayers, the number of the brethren increases, and some of them want to build more cells where they may live in peace. How far away from here do you think we should build the cells?” Abba Anthony said, “Let us eat at the ninth hour and then let us go out for a walk in the desert and explore the country.” So they went out into the desert and they walked until sunset and then Abba Anthony said, “Let us pray and plant the cross here, so that those who wish to do so may build here. Then when those who remain there want to visit those who have come here, they can take a little food at the ninth hour and then come. If they do this, they will be able to keep in touch with each other without distraction of mind.” The distance is twelve miles.[1]

Despite the fact that many monks and nuns are called to a hermitage, monasticism, even for those who are most inclined to seclusion, must not be confused as being anti-communitarian. When forming monasteries, Anthony knew that monks must be able to have privacy in which they can meditate with God in silence. Yet, he also knew that they must be able to have a way in which they could meet up, dialogue, enrich each other with their experiences and wisdom, and finally, so that they can come together for times of communal worship.

Even though Anthony took off into the desert to find solitude, he never found it, nor could he have lived without the help and aid of others. Not only did others follow him into the desert, establishing monastic communities which interacted with each other, Anthony had to rely upon those who went into the desert for the material good like food which they provided to him so he could continue on with his ascetic way of life. When Anthony was sick or wounded, it was because others lived near him and looked after him and his wellbeing, he could be taken to the doctor and healed and return to his monastic endeavors.

From his own experiences, Anthony knew no one was meant to go into the desert completely alone and independent from the rest of humanity. Not only do we need each other in times of need, even if that were not the case, the sense of pride which could develop as a result of such extreme asceticism would not be able to be overcome because there would be no one to help such a laborer to see the error of their ways. Moreover, the ascetic pursuit is a pursuit for holiness, a holiness which has a particular goal in mind: to become a better follower of Jesus Christ, doing all that Christ would have one do. Christ’s own words indicates that we are called to a communal form of life, not to be islands unto ourselves, for we are called to love our neighbor as ourselves, and if we abandon our neighbor, we therefore abandon Christ’s expectations on us.  When someone rejects the rest of humanity, living in total isolation from everyone else, they flee their responsibility, for the needs of their neighbor will not be before them; while it would be easy for them to say, “I am praying for my neighbor,” this is usually not enough, because our neighbor needs more than our prayers but our active love, helping them in their times of need.

Nonetheless, it is also possible for us to be distracted by our love for community. We take a good and abuse it by engaging it in excess. We enjoy the presence of others and the time we have with them, which is indeed good when we do so, but because of this, we want to be with them more than is good for us or for them. “For everything there is a season, and a time for every matter under heaven” (Eccl. 3:1 RSV). We are to love our neighbor as ourselves. We should do what we can for them, rejoicing in each other’s company, but we need to remember, just like gorging on food can turn the good of food into harm for our body, too much time with others can make us ignore our other responsibilities and end up suffering as a result. We, therefore, need to have times where we engage our friends, family and great community, and other times where we need to be alone. Both are needed. Depending upon one’s calling in life, some might be expected and required to engage the community more, while others are going to be more likely by themselves.

Anthony, reflecting upon the needs of those who followed after him to make the desert into a Christian abode, saw that there would be the need for community, and also that there would also be a need for the various anchorites to live apart from each other so they could keep to their monastic practice without much interruption. This he accomplished by the example set up in this saying, where he suggested the distance which should exist between various monks and monastic communities, where they would be able to get together but it would not be too close so as to give temptation to be coming together more often than was practical.

“Iron sharpens iron, and one man sharpens another”  (Prov. 27:17 RSV). To live without community, therefore, would mean there would be no one there to help strengthen us, to help us through their presence to grow in knowledge and wisdom. We need each other, moreover, to help each other find the proper challenges which we need, tests which will demonstrate our weaknesses and places which we need improvement, as well as trials and competitions which elucidate our strengths and help us continue engaging them to perfection. Without the examples of others, we could easily get so aloof that we lose sight of our goal and think we have attained it, especially if we have no one else to help us see where we are mistaken.

St. Pachomius recommended we use Scripture as an example, to show different walks of life: “If you wish to live among men, imitate Abraham, Lot, Moses and Samuel. If you wish to live in the desert, all the prophets have led the way there before you. Be like them, wandering in the deserts, valleys, and caves of the earth, plunged in misery, trials, and afflictions.”[2]  Abraham, Lot, Moses, and Samuel all show us that holiness can be found, not apart from the world, but living in and with the people, helping them, loving them, even if those around us prove to be great sinners. This is not to say they never engaged personal retreats from the rest of society so that they could engage silence and be blessed by it. Likewise, when they found it prudent to disengage from their peers, they did not go alone. Abraham left his family home, but he took his family with him. Lot hid himself and his family in his home, and yet he also worked at the city gates, welcoming strangers, showing them hospitality and love, helping anyone who would come to Sodom so that they would not need to be molested by its inhabitants.  Moses went up Mt. Sinai, ascended to greatness, but his work and accomplishment was not for himself but for the people of Israel, and those who were to come after him.  For those called to monastic life,  the spiritual desert, the prophets were to be their guides: the prophets often lived their life set apart from the rest of society, wandering the land, but they never abandoned the people of Israel. Their mission was for the community as a whole, helping to redirect the nation to the righteousness of God. Even in their seclusion they came upon others, living with them and helping them, as we can see in the example of Elijah with the Widow at Zarephath.

No one is meant be entirely alone all the time, and yet, we all need times in which we find solitude. Anthony suggested for the early monastic community the means by which this could be accomplished; he suggested a distance based upon the time it took to walk as the form by which he could keep the anchorites separate but not absolutely apart. Time and distance are related, and we can consider the suggestion of Anthony more related to that of time than distance because the speed by which people can cover distances changes. His concern was to make sure there was a set time to measure the distance, and so for us, we can also see in our day to day life, it might be proper also to set times in which we get together with others (if we live more a life a solitude), or, in reverse, if we live in a community and with others, we might want to set times in which we retreat and find time to be alone, finding peace in silence.

[IMG=Cross in the Desert by Mujaddara [CC BY-SA 3.0 (http://creativecommons.org/licenses/by-sa/3.0)], via Wikimedia Commons] 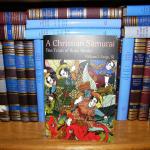 August 16, 2017
Book Review: A Christian Samurai: The Trials of Baba Bunkō
Next Post 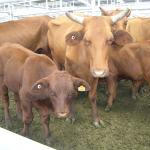 August 21, 2017 Discern the Way, Become Truly Rich, Lest You Suffer From Your Poverty of Character
Recent Comments
0 | Leave a Comment
Browse Our Archives
get the latest from
A Little Bit of Nothing
Sign up for our newsletter
POPULAR AT PATHEOS Catholic
1 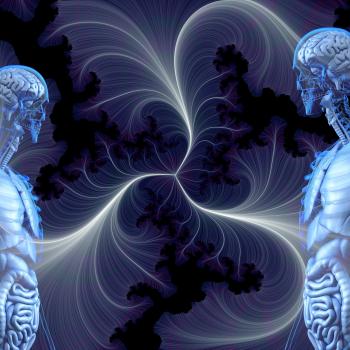 Charismatic Emotional / Demonstrative "Excesses": Biblical Analogies
Someone made a snide reference to "some lady jumping up and down...
view all Catholic blogs
What Are Your Thoughts?leave a comment
Copyright 2008-2020, Patheos. All rights reserved.