Remembrance of Her March 28, 2018 Henry Karlson 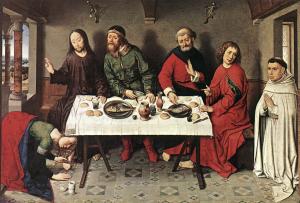 Most of us are tempted with vainglory. We love the praise of others. When we get a lot, we let it get to our head, making us think we are something special, indeed, it makes us think we are some kind of authority in the world. Greatness, to us, is found when we have wealth, fame, and the power to demand others to serve us as we wish. But such greatness is ephemeral; it is easily lost. Fortunes come and go all so easily. We quickly lose what we took so long to gain, and with it, we find that it was never ours. The greatness we thought we possessed was merely an illusion.

True greatness, Jesus told us, is found in service; to be sure, it is not any kind of service, but service which is rendered to others in love and truth. What is sowed in truth and nourished by love will ripen within and allow us to become great, with a greatness that cannot be taken away from us. When Jesus heard his disciples fighting amongst each other, trying to determine who was the greatest of them after he served them at the Mystical Supper, he had to reprimand them, telling them what true greatness was about:

Jesus had made his way into Jerusalem. As he was praised by the people, his disciples, not yet understanding what was about to happen, wanted to be seen next to Jesus, to be his righthand man. They believed that Jesus was about to take possession of an earthly throne, and they wanted to be seen net to him, to be second in authority under hm. Gently, Jesus responded to their dispute, telling them that to be first is to be last, that is, to be the leader with authority is to be the one who humbles themselves before all. True leadership is found in service instead of demanding to be served. To sit at the table and to be served might seem like a better position, but it is the one who serves, the one who gives what everyone else needs, who demonstrates their greater power and ability, for those who do not have cannot serve, while those who can and should.

This was to be beautifully demonstrated by a woman, Mary of Bethany, who came to anoint Jesus; she was to be remembered great because of her love, a love which was proven because it led her to render service to Jesus instead of asking him to serve her:

Now when Jesus was at Bethany in the house of Simon the leper, a woman came up to him with an alabaster flask of very expensive ointment, and she poured it on his head, as he sat at table.  But when the disciples saw it, they were indignant, saying, “Why this waste? For this ointment might have been sold for a large sum, and given to the poor.”  But Jesus, aware of this, said to them, “Why do you trouble the woman? For she has done a beautiful thing to me.  For you always have the poor with you, but you will not always have me.  In pouring this ointment on my body she has done it to prepare me for burial.  Truly, I say to you, wherever this gospel is preached in the whole world, what she has done will be told in memory of her.” (Matt. 26:6-13 RSV)

Jesus himself rendered this woman, named as Mary of Bethany in other the Gospel of John (cf. Jn. 12: 1-8), greater service in return by lifting her up into eternal memory. The other disciples, especially Judas, were indignant with her; a woman dared to come in front of them and take her place and Jesus’ feet. They excused their disdain by saying they were concerned with the money she used to buy the ointment which she used to anoint Jesus. Judas was not pretending; with his great greed, he was especially upset that Mary had done this, because he wished that she had given over money to Jesus so that he could have it in his possession; when Jesus responded to the closed hearts of his disciples, indicating their lack of love, most were able to take his gentle and see that this was exactly the kind of greatness Jesus had been indicating to them as being necessary for his disciples. A woman had been lifted up as being greater than they; she didn’t argue over greatness, she acted in pure love. She had done a beautiful thing, for all that is good and true is beautiful and will lift up the hearts of those who love the truth. She, a woman, acting like the prophet Samuel, anointed the messianic king, preparing him for his messianic work. Jesus was going to fight the final enemy of death with his own death, after which he would reveal the kingdom of God in the glory of the resurrection.

Is there any surprise that this is the time when Judas was said to have gone away, seeking to betray Christ? For truly in his greed and desire for earthly glory, Judas had already betrayed Jesus, but now, with the light of truth demonstrating the difference between what Judas sought and what Jesus was to give, Judas acted on what was in his heart with his betrayal:

Then one of the twelve, who was called Judas Iscariot, went to the chief priests  and said, “What will you give me if I deliver him to you?” And they paid him thirty pieces of silver.  And from that moment he sought an opportunity to betray him. (Matt. 26:214-16 RSV).

Mary of Bethany, because of her greatness, came to Jesus and served him out of the bounty of love she had for God. Judas, searching for greatness, sought it in any way he could attain it. When it was clear that Jesus would not give to him his desire, he thought he would take it from Jesus, forcing Jesus to act or perish; in either occasion, he thought he would be there at the center of a messianic drama, as the catalyst who would be honored for eternity. Mary was what Judas wanted to be, and she was it because she knew greatness was not found in what we sought to possess but in what we render to others. Those who have more give it out without attachment, while those who seek it out to hold onto themselves will never be able to possess it. So long as we ignore this, we will be more like Judas than like Mary, risking, like Judas, our very soul.

[Image=Jesus in the House of Simon by Dieric Bouts [Public domain], via Wikimedia Commons] 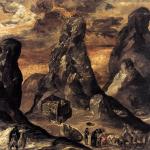 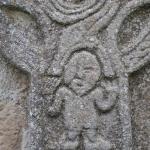