The Preparation For Christ 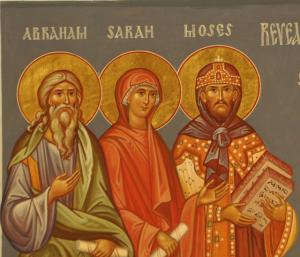 Matthew begins his Gospel indicating the relationship of Jesus with King David, and therefore, with Abraham: “The book of the genealogy of Jesus Christ, the son of David, the son of Abraham” (Matt. 1:1 RSV). Jesus is the seed of Abraham, the messiah of Israel, the savior of the world. Jesus’ human descent is important as it relates the preparatory process by which God worked with humanity to establish the God-man in history. Jesus, as the Word of God, is the only-begotten Son of the Father, begotten not made, eternally born of the Father, but as a human, he is a man with a history, a history which is not meant to be taken for granted. For that history reveals the interpenetration of the Word of God with humanity, how the Word worked with humanity in and through the legacy of Israel so as to properly place the seed of Abraham into such a fruitful soil that he could take it up and assume it into himself when the time was right. It is a history of heroes, of valiant men and women, who lived according to the grace given to them, helping to establish the social dimension which was necessary for the seed of Abraham to find its fulfillment in Christ. This is why it is important to remember not only those who are in the direct lineage of Christ, but also those who were a part of the story of that lineage, for the two are interdependent just like a seed needs the right soil for it to sprout.

Origen explains to us how Scripture reveals the story of the seed of Abraham, and how it was preserved through time, so that God’s promise to Abraham could be fulfilled (which is why the people of Israel, despite their sins, were also granted God’s loving protection, for they shared a major part of that story):

He says, “And as Isaiah predicted, ‘If the Lord of hosts had not left seed to us, we would have become like Sodom and been made like Gomorrah.’” Which seed does Isaiah say was left by the Lord? Undoubtedly the seed that the same Apostle is expounding upon in another passage where he says that it was said to Abraham, “To you and your seed I will give this land. He did not say, ‘and to the seeds,’ as to many; but , ‘to your seed,’ as to one, who is Christ.” This, then, is what Isaiah is saying, “If the Lord had not left the seed for us,” that is to say, if he had not given Christ to us, that he would be born from us, “we would have become like Sodom,” in terms of the magnitude of godlessness. [1]

The seed, the lineage of Christ, is important; all the ancestors of Christ, fathers and mothers alike, share in the work of God as God prepared the world for the incarnation. Their lives and actions can be seen to reflect aspects of Christ, which is how and why many writings about them serve a double purpose, both telling us about the glories of the saints of Israel as well as revealing to us an insight to the way God was collecting these qualities together to establish the humanity of Christ. Each man and woman in the lineage of Christ, anticipate Christ, so that in and through them, we can better understand Christ himself. This is why their stories, as well as the whole history of Israel, must never be neglected or abandoned. They people of Israel represent the central preparatory work of God so that in and with them, he provided the means by which we are to reflect upon Christ and his mission to the world.

Certainly, one of the central figures of the Torah is Abraham. This holy man, Abraham, in his faithful adherence to the path God established for him, lived a life of faith which pointed to the coming of Christ: “By faith he sojourned in the land of promise, as in a foreign land, living in tents with Isaac and Jacob, heirs with him of the same promise. For he looked forward to the city which has foundations, whose builder and maker is God” (Heb. 11:9-10 RSV). Abraham looked forward to the fulfillment of the promise given to him, a promise which he thought would be fulfilled in Isaac until God revealed to him that Isaac was himself only a type of Christ:[2]

By faith Abraham, when he was tested, offered up Isaac, and he who had received the promises was ready to offer up his only son, of whom it was said, “Through Isaac shall your descendants be named.” He considered that God was able to raise men even from the dead; hence he did receive him back, and this was a symbol (Heb. 11:17-219 RSV).

And because of this, those who follow Christ can be seen to be spiritually in the lineage of Isaac:

Evidently this was already being pointed out back then to Abraham, who had with him many sons whom the Apostle calls sons of the flesh, but in Isaac alone, who was the son of promise, the lineage of his own descendants was appointed. And now, therefore, those who are sons of promise according to Isaac, i.e., [sons] of that faith through which Abraham merited to receive the promise of the future inheritance, these alone are reckoned as descendants; for in them the succession of the inheritance is established.[3]

But it was not just Abraham and Isaac: everyone in whole lineage which was able to represent something which would be filled in Jesus, and beside them, were holy men and women who helped prop them up and give the opportunity for the seed of Abraham to be passed down from generation to generation until the time was right for the incarnation. This, of course, is not just the fathers, the patriarchs, whose stories are the most represented in Scripture; it is also true with the mother: they had an equal share in the work which was done to prepare the world for Christ. Indeed, in the end, it was only through a woman who knew not a man, Mary the Theotokos, we find the preparation for Christ reached its zenith. All of the men and women in the lineage of Christ, as well as their companions, helpers, and other holy associates, should be seen as forerunners of Christ, who prefigured the life, death and resurrection of Jesus through their life stories, so that each of them can be seen to represent not only Christ but each other:

The Sunday before the Nativity brings to mind not only the whole lineage of Christ, but the history of God’s work with humanity as a whole. Men and women who responded to God, who said yes to God and let God work in and through them, are brought to our mind. Together, they shared in making the world ready for the God-man. All of what they did, all the preparation of God for the God-man, culminated in the birth of Mary.  Then, Mary in her yes, was able to fulfill the destiny of the line of Abraham, even as she spoke for the whole of humanity, by saying yes to God, allowing God to produce in her, through her, and with her, the God-man. When God assumed humanity, he did not partake of a generic nature without historical content: rather, he assumed flesh from Mary and made it his own. He made the whole lineage of Mary his own. He made the Jewish heritage his own: he took it up, accepted it, and turned its potential into realization as he fulfilled the law, not just in the letter but in the spirit. The hopes and fears of his ancestors were taken up into him, and he masterfully took them all and used them for the benefit of all humanity, allowing Israel to fulfil its great, universal destiny. Israel is not to be denied; the law and the prophets do not pass away: they are assumed into Christ, their destiny is joined with his, and they find themselves fulfilled in him, thereby transforming the law and prophets from their particular application in the past to a universal application which applies to the whole of humanity.

The feast of the nativity is anticipated with the feast of the Holy Fathers and Mothers, the feast which remembers holy people who preceded the coming of Christ. The preparation for Christ must never be denied: the anticipation which existed in the time before Christ is to be remembered and kept alive. We must engage it, even as we now rejoice in the coming of the messiah, born of the Virgin Mary:

Rejoice, Bethlehem! Prepare yourself, O Ephratha! The Lamb is on her way to give birth to the Chief Shepherd she carries in her womb.  The God-bearing forefathers will rejoice, beholding Him,  and with the shepherds, they will glorify the Virgin nursing Him (Kontakion of the Feast of the Holy Fathers [and Mothers]).

[IMG=Icon of Abraham, Sarah and Moses; photo by FrTed [CC BY-SA 2.0] via Flickr]

[2] This is how some writers explained Abraham’s willingness to sacrifice his son: Abraham thought Isaac would fulfill the messianic expectations, being his immediate, literal seed, so that if Isaac was killed, God would raise him up and establish the kingdom of God. However, as Abraham misunderstood God’s intention, he needed to be detoured from the sacrifice, and in the process, God was able to reveal that human sacrifice as such is against his desire and will for humanity. 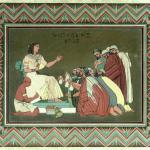 December 18, 2018
On The Patriarch Joseph and Jesus
Next Post 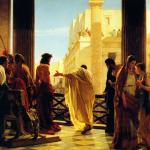