We Must Be Wise Like Noah With The Environment

We Must Be Wise Like Noah With The Environment December 12, 2018 Henry Karlson 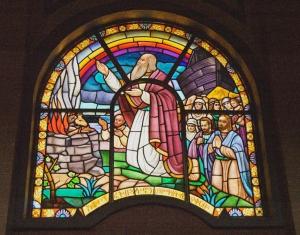 Jesus, warning his listeners to be ever watchful, ever diligent, to preserve the spirit of the end in their lives, said that the days of the Son of Man, his days, the eschatological era which he set up, will be like the days of Noah:

As it was in the days of Noah, so will it be in the days of the Son of man.  They ate, they drank, they married, they were given in marriage, until the day when Noah entered the ark, and the flood came and destroyed them all (Lk. 17:26-27 RSV).

In the days of the Son of Man, in the eschatological era initiated at the incarnation, there will be wise men and women like Noah and his family who will take care of the time and place they find themselves in, living righteous lives, who will warn others of impending tragedies to come, hoping to rescue them from that doom even as there will be those who hear such warnings and will ignore them, indeed, scoffing at them. Those who engage such ridicule will try to live out their lives without any care in the world, nor with any concern for the future:

By faith Noah, being warned by God concerning events as yet unseen, took heed and constructed an ark for the saving of his household; by this he condemned the world and became an heir of the righteousness which comes by faith (Heb. 11:7 RSV).

Jesus warned us to take heed, and realize in the eschatological time which he established, we will face constant tragedies, sometimes on a local scale, sometimes on a global scale, and that we should be wise like Noah, seeking to prepare for those events and seeing what we can do to preserve humanity in the midst of them. The end of the world will come, but before it, will be many anticipatory representations of that end, from the destruction of the Temple, to the Mongol hordes in Europe, to the tragedy of the World Wars, and, if we are careful and pay attention, to the devastation which lies ahead of us due to climate change.

Wisdom suggests we should prepare for the effects of climate change. Disaster is around the corner, indeed, it is already here.  People have already suffered as a result of climate change, and it will only get worse. The warnings are there. People who see and know what is coming, because they are afraid of what their children and grandchildren will face, keep warning the world, asking for solutions to be made now before the effects are even greater and harder to fix. Instead of listening, major powers, like the United States, are more than ignoring the problem, they are making it worse for the sake of economic gain. Thus, Max Rosenthal explains, the United States is giving other nations excuses to avoid changing their ways and go back to older, outdated ways of dealing with their energy needs which will hasten climate change:

Activists say Trump’s influence on the summit has been clear — and negative. “He’s opened the door to people who were on the fringe to be in the room and spread their fact-free message,” Keith Gaby, a spokesman for the Environmental Defense Fund, told The Washington Post’s Darryl Fears. “The president doesn’t believe his own government when it comes to climate change, and he’s emboldened others to come forward.”[1]

Ignoring environmental concerns which relate to climate change has provided the means to ignore environmental concerns in general, with immediate economic and business interests being promoted as more important than anything else.[2] This is how and why the Trump Administration is willing to remove clean water protections which have been helping the nation. Coral Davenport in the New York Times reports:

Environmentalists say the proposal represents a historic assault on wetlands regulation at a moment when Mr. Trump has repeatedly voiced a commitment to “crystal-clean water.” The proposed new rule would chip away at safeguards put in place a quarter century ago, during the administration of President George H.W. Bush, who implemented a policy designed to ensure that no wetlands lost federal protection.[3]

The change, of course, includes changes set up by the Obama Administration, which have helped protect California and other states, as Evan Harper explains:

The Trump administration is poised to roll back Clean Water Act protections on millions of acres of waterways and wetlands, including up to two-thirds of California’s inland streams, following through on a promise to agriculture interests and real estate developers to rewrite an Obama-era rule limiting pollution.[4]

It is not just real estate developers who benefit from these changes, but many industries which have cut down pollution affecting the United States will be free to go back to the way they were before these policies were in place, overturning the purification efforts that have gone on for decades, as Sharon Lerner laments:

According to the rule, which is due out next week, streams that don’t run year-round and many wetlands will no longer be subject to the Clean Water Act. As a result, a wide range of industries — including agriculture, mining, waste management, chemical companies, real estate development, and road construction — will be free to pollute, reroute, and pave over these waterways as they see fit.[5]

Similar rollbacks are being proposed for the way Nuclear Waste is to be treated, all for the interest of a few to make more money. No care or concern is being had for the effects of these changes. No long-term interest in the environment is being shown because those with money and influence, and this is because they do not care about the future, nor the lives they harm as a result of their avarice. They want to live, drink and be merry, for they know they will die, and that is all they care. Such a sentiment must never be accepted. The voices crying out in the wildness must be heard. The devastation being done to the environment, which is more than the kind being done to cause climate change, is gearing towards a world-changing disaster. Wise men and women know this and are warning humanity of the consequences of their actions. Their voices are being ridiculed by those in power just like Noah. But it does not have to end like this. Hopefully there is time left to change course. But to do that, we must selflessly repair the environment, building it up like Noah did his ark, so that we can then preserve the world from the disaster of our own making.

[IMG=Stain Glass Window of Noah Giving Thanks; photograph taken by A. Davey [CC BY 2.0 (https://creativecommons.org/licenses/by/2.0)], via Wikimedia Commons]

[2] Long term business interests would be better suited to deal with the reality of the environment, but that takes people concerned about a future in which they do not themselves live.

[4] Evan Harper, “Trump Administration Poised To Strip Protections From Up To Two-thirds Of California Streams And Millions Of Acres Nationwide” in The Los Angeles Times (12-10-2018). 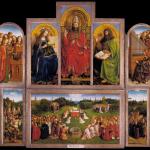 December 11, 2018
There Is No Truth Without Beauty
Next Post 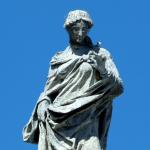