Ascended Beyond Space and Time

The final act of Jesus’ historical earthly ministry was his ascension into heaven. After his resurrection from the death, he enlightened the Apostles, showing them the correspondence between prophecy and what he had accomplished. Then he set them up to lead the church, giving it the foundation it needed to continue throughout history so that he could then ascend, exiting, as it were, the spatial-temporal mode of being:

Then he said to them, “These are my words which I spoke to you, while I was still with you, that everything written about me in the law of Moses and the prophets and the psalms must be fulfilled.”  Then he opened their minds to understand the scriptures, and said to them, “Thus it is written, that the Christ should suffer and on the third day rise from the dead, and that repentance and forgiveness of sins should be preached in his name to all nations, beginning from Jerusalem.  You are witnesses of these things.  And behold, I send the promise of my Father upon you; but stay in the city, until you are clothed with power from on high.”

Then he led them out as far as Bethany, and lifting up his hands he blessed them.  While he blessed them, he parted from them, and was carried up into heaven.  And they returned to Jerusalem with great joy, worshipped him, and were continually in the temple blessing God (Lk. 24:44-53 RSV).

We cannot entirely comprehend the ascension. When we read about it in Scripture, it appears that Jesus rose from the ground, entered into the clouds, and then continued to rise, going beyond the atmosphere and into space. But if we assume that Jesus’ entry into heaven is merely his entry into space, we can then ask, where did he go? Did he fly off and visit other worlds? Or is he just orbiting the earth, waiting for the time to descend once again? While it is understandable why many could have held such a simplistic understanding of the ascension, human entry and exploration into space should have ended any such consideration requiring people who held such a view to ponder once again, what exactly happened at his ascension. Where did Jesus go?

We must remember that God lies outside of all space and time, and yet it can be said, in a fashion, that God made a place within himself for a created other to exist, a space that includes all that is within space and time. Various forms of panentheism, saying that all things are somehow found within God while God remains beyond them, can be used to explain the relationship between God and his creation. One of the most potent versions of panentheism is the Trinitarian; in it, the relative distinctions between the persons of the Trinity are seen as creating the space for that ad extra to God. That is, in the process of begetting the Son, and in the procession of the Spirit, there Father, Son and Holy Spirit are in some ways distinct from each other, even if they are one in the divinity, so that there is a space between them, a space which then opens up and becomes a place in which they can work together. In this way, creation is not outside of God, but also not confused with God.  This not only allows for a created, temporal space, but a place beyond space and time, something which connects with eternity itself, the eternal kingdom of God which exists beyond the spatial-temporal form of created reality which we currently experience.

Heaven, then, is outside of space and time as we know them. It can still analogously by called a space; we can say it is where Jesus “went.” But as we only analogously call it space, it is no longer space as we consider it, so that when we look for him in our space, in some sort of materialistic form, we will not find him. Jesus’s ascent is the transference from space-time into heaven, a change, as it were, in his mode of being (at least, the mode of being which his humanity assumed).

But, in speaking about heaven in fashion, we must be careful. We must remember that this entry into heaven, this change of his mode of existence, was not the dissolution of his body. His body is a part of him, and remains a part of him into eternity. The whole point of the resurrection shows this. He did not rise from the dead just to put aside his body.  This is what Hugh of St. Victor meant when he wrote that what was given immortality did not lose its nature, to be diffused everywhere:

To whom indeed He gave immortality, from Him He did not take away nature. He is not to be thought diffused everywhere, according to this form. For we must beware lest we so build up the divinity of man that we take away the truth of body. [1]

Jesus remains in bodily form; eternal life is life with the body, not apart from it. Jesus did not rise from the dead merely to put aside his body once again. Rather, what is earthly, what comes from his humanity, such as his body, remains with him in eternity, in the transcendent kingdom of heaven. He can be encountered by us everywhere because the kingdom of heaven is not limited by notions of space and time, while those who think he just dissolved and entered the whole of space in a dissolution of his body assume he does so in a way to remain within the confines of the spatial-temporal mode of being. The body remains, but it is transformed, so that it can be spiritualized, that is, transcend the limitations of space and time. What this fully means is presently a mystery for us because our understanding of bodily existence relates to the spatial-temporal mode of being which we currently experience.

But, some might ask, what are we to believe when we say he is seated at the right hand of the Father? Does that not demonstrate some spatial character to heaven?  St. Peter Chrysologus points out the answer: it is an analogy representing the honor and glory and power of Jesus himself:

You proclaim: He is seated at the right hand of the Father, such that, since the divinity of the Father and the Son is one and their power is equal, in the heavenly seating plan the insult of being seated on the left does not exist.[2]

When Scripture was written, the left hand was considered filthy, and to be put on someone’s left was seen as a kind of dishonor. In heaven, there is no actual space, no right or left. All who are in heaven, likewise, are honored, and so are metaphorically on the right. Being seated at the right hand of the Father, therefore, is to say Jesus is honored by the Father. Likewise, we find ourselves on the right hand of the Father through our union with Jesus Christ, so that being incorporated into him, we share not only in his death and resurrection but also his ascension, where we partake of the divine glory.

Finally, it might be asked, why did Jesus not immediately ascend after his resurrection, if the point was not only to bring us immortality but eternal life in the transcendent kingdom of heaven? The answer to this, St. Bonaventure thought, is that we first needed to be shown the resurrected Christ, to know that death is not the end, so that we can then have hope for more, the hope of heaven itself:

Further, that He might raise hope, He ascended to the heavenly glory which we hope for. But because hope does not arise except from a faith in future immortality, He did not ascend immediately but only after an interval of forty days during which He demonstrated by many signs and arguments the truth of the Resurrection  by which the soul is strengthened in faith and raised to the level of hoping for the heavenly glory.[3]

The ascension of Christ completes Jesus’ earthly ministry as he takes all things in him and through him into heavenly glory. The union of heaven and earth, begun with the incarnation, is complete in the ascension: heaven reached down to earth, and the earth is taken up. This is the glory of the ascension. This is the Christian hope: that we might have eternal life, the life of heaven itself, in and through Christ, who ascended in his body so he can take the whole of earth, the whole of creation, with him into a new, glorified mode of existence. 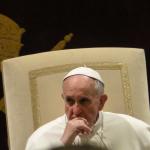 May 28, 2019
The Pope's Important Words To A World Being Torn Apart By Nationalistic Ideologies
Next Post 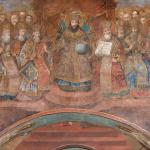 June 2, 2019 The Glorification of the Son: A Reflection on The Sunday of the Fathers of the First Ecumenical Council
Recent Comments
0 | Leave a Comment
Browse Our Archives
Follow Us!