One of the most important developments of Vatican Council II is its promotion of religious liberty.  In Nostra Aetate, the council declared that religious discrimination, among other forms of discrimination, is far from the mind of Christ:

The Church reproves, as foreign to the mind of Christ, any discrimination against men or harassment of them because of their race, color, condition of life, or religion. On the contrary, following in the footsteps of the holy Apostles Peter and Paul, this sacred synod ardently implores the Christian faithful to “maintain good fellowship among the nations” (1 Peter 2:12), and, if possible, to live for their part in peace with all men, so that they may truly be sons of the Father who is in heaven. [1]

This development must not be understood as something entirely new, nor as something which runs contrary to tradition. Religious tolerance, and with it religious liberty, has been proclaimed by Christians since the foundation of the church. The complaint which many Christian apologists gave to Roman authorities was that their religious liberty was being impeded. They said religion should not be coerced. Rather, they said people should be free to believe and worship as they choose (so long as their actions were just or harmed no one else; human sacrifices, because of the harm done, should not be tolerated, but people worshiping Ronald McDonald and paying tribute to Ronald McDonald House, however absurd such worship would be, should be free to do as they please because such practices would not harm civil society). Thus, Tertullian wrote:

Let one man worship God, another Jupiter; let one lift suppliant hands to the heavens, another to the altar of Fides; let one — if you choose to take this view of it — count in prayer the clouds, and another the ceiling panels; let one consecrate his own life to his God, and another that of a goat. For see that you do not give a further ground for the charge of irreligion, by taking away religious liberty, and forbidding free choice of deity, so that I may no longer worship according to my inclination, but am compelled to worship against it. [2]

In the pre-Nicene era, Christians easily understood this as they were the ones who suffered religious persecution. Apologist after apologist not only defended Christian beliefs, they also defended the right of Christians to believe and practice as they wish. A part of their work was to demonstrate that Christians did not harm the common good (and rather, by their promotion of justice, supported it).

Religious liberty helps promote peace among people. It reminds us not to force our beliefs upon others. Coercion runs contrary to the foundation of religious belief. True worship must be voluntary:

But as it was easily seen to be unjust to compel freemen against their will to offer sacrifice (for even in other acts of religious service a willing mind is required), it should be counted quite absurd for one man to compel another to do honour to the gods, when he ought ever voluntarily, and in the sense of his own need, to seek their favour, lest in the liberty which is his right he should be ready to say, “I want none of Jupiter’s favours; pray who are you? Let Janus meet me with angry looks, with whichever of his faces he likes; what have you to do with me?”[3]

And so, Tertullian declared that religious liberty is a fundamental human right which should not be subverted:

However, it is a fundamental human right, a privilege of nature, that every man should worship according to his own convictions: one man’s religion neither harms nor helps another man. It is assuredly no part of religion to compel religion — to which free-will and not force should lead us — the sacrificial victims even being required of a willing mind. You will render no real service to your gods by compelling us to sacrifice. For they can have no desire of offerings from the unwilling, unless they are animated by a spirit of contention, which is a thing altogether undivine.[4]

God does not desire people to be forced to worship him. Rather, God desires to love and be loved. Religious liberty allows for religion to be based upon love. Coercion and lies, on the other hand, do not lead us to worship God in the spirit of love and truth which he desires. This, for Christians, explains why religious liberty is a fundamental teaching of the faith. Love is true only when it is given freely. But it is also important for the sake of peace. Religious liberty is a part of the foundations needed to establish the common good. Without one or the church or the state trying to impose itself unjustly on the other, they can work together. Vladimir Solovyov, understanding this, said:

The correct relationship of church and state, without doubt, is one of mutual freedom, yet not a negative freedom of indifference, but a positive freedom of harmonious cooperation in the collegial service of one common goal – the building of true community on earth. [5]

Even though St. Thomas Aquinas was somewhat reserved on the notion of religious liberty (and sometimes, allowed it to be limited), he explained that he thought it is necessary for societies which possess a great diversity of religious faiths. If Christians tried to circumvent religious liberty and force people to convert, their actions might lead to a few converts, but it would have far more being scandalized and rejecting Christianity:

On the other hand, the rites of other unbelievers, which are neither truthful nor profitable are by no means to be tolerated, except perchance in order to avoid an evil, e.g. the scandal or disturbance that might ensue, or some hindrance to the salvation of those who if they were unmolested might gradually be converted to the faith. For this reason the Church, at times, has tolerated the rites even of heretics and pagans, when unbelievers were very numerous.[6]

It is important for us to realize that there is a history of Christians teaching and promoting religious liberty. Despite this, it is true, when Christians found themselves in positions of power, they often abused that power and ignored religious liberty. This is not because of the teachings of the Christian faith, but rather, in spite of them. In its ressourcement, Vatican II realized the common good, and with it love and justice, stood at the foundation of Christian engagement with others. We fail to follow the faith ourselves if we do not show love to others:

We cannot truly call on God, the Father of all, if we refuse to treat in a brotherly way any man, created as he is in the image of God. Man’s relation to God the Father and his relation to men his brothers are so linked together that Scripture says: “He who does not love does not know God” (1 John 4:8). [7]

We are to treat others as we would like to be treated. This is one of the ways which we show our love to others. If we want to have the freedom to worship as we choose, we must defend the rights of others to worship and believe as they choose as well. Religious liberty comes out of the basic teachings of the Christian faith. The early Christians especially understood its need because they suffered from its rejection by Roman authorities. But we can’t follow religious liberty only out of selfish motives. Rather, as Nostra Aetate explained, we need to promote religious liberty because Christ wants us to be people who so love God, we love others as ourselves. The council showed us the proper foundation for religious liberty is love. And we should not be surprised, for love is the root of the law of God. When it is lost and forgotten, then the law becomes a mere letter which kills.

Religious liberty is what we would like for ourselves. We do not want to be coerced or lied to in order to come to a particular faith. Therefore, we must treat others as we would like to be treated. We must show them the respect we would like to be shown. This means we must trust them in making their own religious decisions. We can believe they are mistaken in their beliefs, even as they can believe we are wrong in ours. But we wouldn’t want to be forced to reject our beliefs if others think we are wrong, and so we must not force others to abandon their beliefs if we think they are in error. We can discuss our beliefs. We can share them. We can promote them with integrity. But in the end, we must accept that we can’t make others believe. We must love them, no matter what they believe, and work with them for the common good. 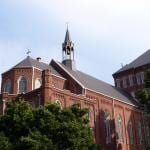 February 10, 2020
Making A Mockery of Religious Liberty
Next Post 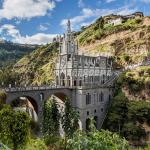 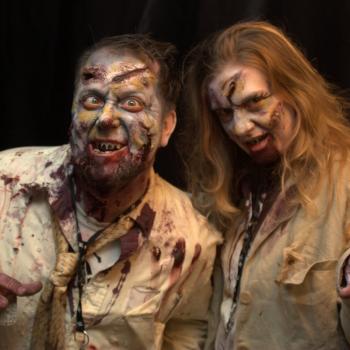 Catholic
The Walking Self-Righteous Dead
A Little Bit of Nothing

Catholic
What Good Is There In Going To Church...
A Little Bit of Nothing
TRENDING AT PATHEOS Catholic