And when he had said this, as they were looking on, he was lifted up, and a cloud took him out of their sight. And while they were gazing into heaven as he went, behold, two men stood by them in white robes, and said, “Men of Galilee, why do you stand looking into heaven? This Jesus, who was taken up from you into heaven, will come in the same way as you saw him go into heaven” (Acts 1:9-11 RSV).

It is easy to understand why many people assume that the ascension indicates Jesus went into the physical heavens, that is, into outer space. It also explains why those who understood the ascension this way were confused when the Russians, and later others, made their way into space, for Jesus was not found waiting for humanity to come and meet him in space. Some, following this interpretation of the event, likewise suggested his apparent absence in space proves the Christian faith to be false. But, the true meaning of the event is much different: Jesus did not go into the physical heavens, rather, he went to the kingdom of God, transcending space and time. Likewise, the ascension is in relation to his humanity, and with it, our humanity, so that in and through his ascension, humanity finds a place in the kingdom of God and is capable of becoming a partaker of the divine nature:

And so, as Tauler points out, the ascension points to the greater spiritual fate of humanity. Our goal should be to rise up beyond mere spatio-temporal existence to the true heaven, which is found in the Essence of God. But to be taken up and experience the glory of theosis, everyone has to detach themselves from themselves so that they can become open to and experience the divine life, an experience which transcends human comprehension and so eclipses what can be said about it:

Beyond this, he led into another Heaven which is the divine Essence itself, where the [human] spirit loses itself so completely that no trace of the self remains. What happens to him there, what he experiences and enjoys, no man can ever tell or conceive or understand. Indeed, how could the mind even grasp such a thing? [2]

The work of Christ, then, all serves to fulfill the purpose of the incarnation, which is not merely the salvation of humanity, but its deification (as well as the deification of creation as a whole). Sin had corrupted humanity and imprisoned it by establishing for each person a false self, a false knowing of who and what they thought themselves to be, which it used to keep everyone a captive. Everyone became absorbed in that false-self. There would be no journey to heaven, no experience of the kingdom of God, so long as humanity remain trapped with that self-absorption. The sinful self, with its isolation from God, established by its attempted self-theosis, only leads to ruin.  Jesus, by putting an end to death and destroying the destruction of sin, restores the potential humanity lost as a result of its attempted self-theosis. Now the divine life, which God intended us to experience, can truly be given to us. But this means we must deny the false self and affirm our truer personal nature, the relative, interdependent nature which requires deifying grace from outside ourselves. Sin tries to get us to cut ourselves off from our proper personal character, creating a false image, an individuated self apart from God. So long as we embrace that false self, insofar as we do, we find ourselves turning away from the kingdom of God.

Jesus, therefore, is said to have ascended into heaven, into the kingdom of God. He appeared to rise briefly into the air, into the clouds, and then vanish from the sight of this followers. We must understand that this is a highly symbolic event:

His Ascension refers also to His glorification by the Father, where His being taken into the cloud expresses the overshadowing by glory, according to the symbolism of both the old and the New Testament (e.g., in the Transfiguration). [3]

Jesus, in his divinity, always was in heaven, because he is God; it is his humanity, and all that is connected with his humanity (that is, created nature) which is taken up by him so it can experience the grace of the kingdom of God. All of humanity, all of creation, is to be taken together as one in him so that it can be glorified. Those within creation who try to separate or divide themselves from that unity, create then, the false sense of self which keeps them away from that glory, which is why they must first die to the self, let it vanish, so as to receive their true personal character (one which is interdependent with the rest of creation) as they then find themselves deified in Christ.

Just as his divinity was in heaven, even before the ascension, so his presence remains with us until the end of the age, even after the ascension. It did not separate us from him but rather, it transforms our experience of him. Thus, the apostles, after they received his blessing and experienced his ascension, were able to go and worship him:

While he blessed them, he parted from them, and was carried up into heaven. And they returned to Jerusalem with great joy, worshipped him, and were continually in the temple blessing God (Lk. 24:51-3 RSV).

We, too, can and should be able to experience the presence of Jesus, even when we do not see him as he is covered in the majesty of his glory. We can experience him in many ways, from his sacramental presence in the eucharist, to his image in icons, to his presence in humanity so that what we do with and for others, especially for those in need, we do for him. We must not limit him as if he were bound by physical laws, for in his resurrection, the glorification of the flesh shows he was spiritualized and not bound but such laws. The apostles were used to him in his earthly, pre-resurrection presence. This changed when they experienced his glorified resurrected presence, which was still manifest to them in a localized form. Through the ascension, the ramifications of the spiritualiztion of the flesh is truly made clear, so that we do not have to be stuck with, or sad about, what forms of presence we lack, because we still have his glorified presence always with us until the end of the age. With it he will listen to us, show us comfort, but more importantly, he will lead us to open ourselves up so not to be stuck by our own falsely conceived notions of the self so that we can receive the glory of the kingdom of God in ourselves. Jesus ascended into heaven, let us be glad and rejoice and open ourselves up to the grace of the kingdom of God. 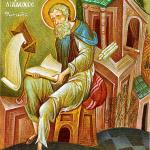 May 18, 2020
Diadochos And the Centrality Of Love
Next Post 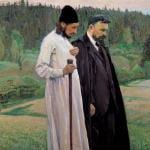