This Is Not Fine: Global Warming, Wildfires, And The Need To Change Our Ways

This Is Not Fine: Global Warming, Wildfires, And The Need To Change Our Ways September 15, 2020 Henry Karlson

In Australia, in the Artic, in the Western United States (such as in California, Oregon and Washington), we have seen larger, far more devastating wildfires develop and spread throughout the last few years. Pictures of the fires are horrifying. Millions of acres are lost. Countless animal and human lives are lost. Homes and businesses are destroyed. And for those who are not even close to the fire have to face the smoke which it produces, which not only blocks out the sun, but strangles them with unhealthy air.

That the wildfires are getting worse should not be a surprise. We have been warned that this would happen as a result of climate change. In 2013, for example, William J. De Groot, Michael D. Flannigan and Brian J. Stocks wrote, “Climate Change and Wildfires,” explaining how climate change would make for more, and more severe wildfires. They indicated that as the average temperature in the world increases, the time in which those wildfires would develop and spread would be longer. Likewise, with more uncontrollable fires rising up around the world, the average temperature of the world would continue to increase, creating, as it were, a troubling loop, where warming of the Earth makes for more fires which makes for more warming of the Earth.

It is not just that we see an increase in fires, but where those fires arise, which is a problem. When we read about fires in the Artic, we should be concerned, as Alexandra Witze explained in Nature:

Wildfires blazed along the Arctic Circle this summer, incinerating tundra, blanketing Siberian cities in smoke and capping the second extraordinary fire season in a row. By the time the fire season waned at the end of last month, the blazes had emitted a record 244 megatonnes of carbon dioxide — that’s 35% more than last year, which also set records. One culprit, scientists say, could be peatlands that are burning as the top of the world melts.

Peatlands are carbon-rich soils that accumulate as waterlogged plants slowly decay, sometimes over thousands of years. They are the most carbon-dense ecosystems on Earth; a typical northern peatland packs in roughly ten times as much carbon as a boreal forest. When peat burns, it releases its ancient carbon to the atmosphere, adding to the heat-trapping gases that cause climate change.[1]

Extreme weather is with us. The fires represent one of the many ways climate change is affecting us.  And those of us, who do not live where the fires are at, just look on with horror. What can we do? We must realize that this is not normal, though it might be the start of a new, and worsening normal. We have been warned. We have not taken those warnings seriously. And now we, and the future of humanity, are beginning to really feel the consequences of our actions.

Is it too late? Probably not, though we must work together and deal with the environment we have created for ourselves. If we can affect the climate, then we can find ways to change it again, reversing the damage which we have done. It will take time, and during that time, we will feel the effects of our sins against the Earth. We will suffer. But, if we come together, if we truly realize we are in this together, if we truly realize the extent of the problem and our connection to the problem, we can get through this. If we do not, then things are likely to get far worse, and humanity and many other species might end up going extinct.

Christians, recognizing the good of creation, recognizing their place as stewards over God’s good Earth, should stand side-by-side with non-Christians who also understand their need to take care of the Earth. We need to come together as one. Christians should know this, but sadly,  it is often Christians, holding an anti-incarnational view of Christina spirituality, who have led us to the place we are at today, for they have taught Christians should not be concerned with the fate of the Earth. Rather, they tell us, we should only be concerned about getting to heaven. Clearly, they ignore Scripture, which talks about God’s will be done on Earth as it is in heaven, that the meek shall inherit the Earth, that the Earth with Heaven will be made new and have a place in eternity. The Earth is not insignificant, and those of us who treat it as such demonstrate our fundamental opposition to God, who created it and made it a good which should be cherished and preserved.

Certainly, it can be pointed out that wildfires are not only the result of climate change, for there have always been wildfires every year. What is new is how many of them there are, how difficult they are to get under control, how long they last, and indeed, where they can be found, as the Union of Concerned Scientists explains: “While fire is a natural and essential part of these ecosystems, warming temperatures and drying soils—both tied to human-caused climate change—have contributed to observed increases in wildfire activity.” [2] Likewise, Ellen Gray tells us, with rising temperatures, the air continues to be too hot at night to get the fires under control: “A warming world also has another consequence that may be contributing to fire conditions persisting over multiple days where they otherwise might not have in the past: higher nighttime temperatures.” [3] Thus, it is not just climate change which makes for these fires,  but climate change makes them worse, much more uncontrollable, and should serve as a warning of what is to come, as Patriarch Bartholomew said in 2019:

While this global wildfire crisis may not entirely or exclusively be a consequence or cause of climate change, the calamitous events that the world is now experiencing undoubtedly and undeniably sound the alarm about the urgent and dire repercussions of a rising level of carbon emissions. Therefore, if nothing else, such extreme phenomena compel us to consider the fundamental fragility of nature, the limited resources of our planet, and the unique sacredness of creation.[4]

Nature is fragile. We can hurt it. We can also work to heal it, which is exactly what we should be doing. But, as Pope Francis indicated, that means we must change our ways; we cannot continue to do things as we have done before and we must educate the public in order to get those changes in place:

An awareness of the gravity of today’s cultural and ecological crisis must be translated into new habits. Many people know that our current progress and the mere amassing of things and pleasures are not enough to give meaning and joy to the human heart, yet they feel unable to give up what the market sets before them. In those countries which should be making the greatest changes in consumer habits, young people have a new ecological sensitivity and a generous spirit, and some of them are making admirable efforts to protect the environment. At the same time, they have grown up in a milieu of extreme consumerism and affluence which makes it difficult to develop other habits. We are faced with an educational challenge. [5]

We must change our ways, but in what fashion? Patriarch Bartholomew answers this by saying the future must be one where we promote justice and compassionate love:

Although we do not consider it appropriate to judge modern civilization on the grounds of criteria related to sin, we wish to underscore that the destruction of the natural environment in our age is associated with human arrogance against nature and our domineering relationship toward the environment, as well as with the model of eudemonism or disposition of greed as a general attitude in life. As incorrect as it is to believe that things were better in the past, it is equally unfitting to shut eyes to what is happening today. The future does not belong to humanity, when it persistently pursues artificial pleasure and novel satisfaction—living in selfish and provocative wastefulness while ignoring others, or unjustly exploiting the vulnerable. The future belongs to righteous justice and compassionate love, to a culture of solidarity and respect for the integrity of creation.[6]

The age of disregarding the Earth, of trashing the Earth, must come to and end. We find ourselves living in a dark and dangerous time. We can no longer put off the responsibility for our actions. The bill, so to speak, is coming, and it comes with interest. We must pay our debts to the  Earth. We must transform ourselves and our way of life. It will be difficult, but it will be much worse for us if we do not. We should see the fire around us and realize, this is not fine. The destruction of the Earth is not fine. Our collective sin is not fine. The world is up in flames. The time to act is now. Let us pray we are not too late. 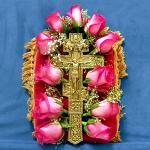 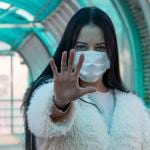 September 17, 2020 Prudent Clergy Must Continue To Realize The Danger Of Going To Mass During The COVID19 Pandemic
Recent Comments
0 | Leave a Comment
Browse Our Archives
get the latest from
A Little Bit of Nothing
Sign up for our newsletter
POPULAR AT PATHEOS Catholic
1 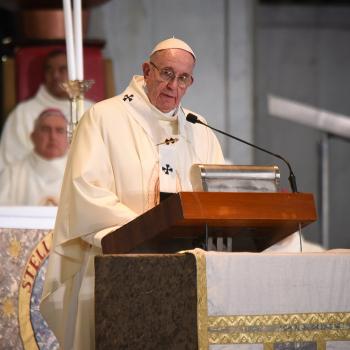 Catholic
Pope Francis And The Crisis Facing American Catholics...
A Little Bit of Nothing 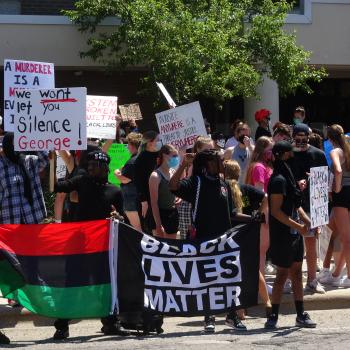 Who is Amy Coney Barrett and Why Are...
Amy Coney Barrett is a former professor at the University of Notre...
view all Catholic blogs
What Are Your Thoughts?leave a comment
Copyright 2008-2020, Patheos. All rights reserved.