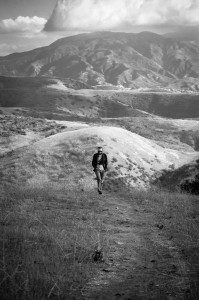 My name is Jason Brown. I grew up in Yorba Linda, an older suburb located in Orange County, California. My neighborhood is located in the traditional territory of the Tongva and Gabrielino indigenous peoples and there was a village located not far from my house, which is now a major freeway overpass. With the arrival of Europeans and flood irrigation, by neighborhood was transformed into an agricultural paradise, and many of the streets are still lined with eucalyptus trees planted as wind breaks and boundary markers for the avocado and orange groves that arrived in the early 1900s. I loved catching lizards and snakes in the arroyos behind our house, and became obsessed with iguanas.

I was raised in the Mormon tradition but had typically tumultuous teenage years. I loved photography and painting and fancied myself as something of a poet. Eventually, I realized that God was missing in my life that I needed to keep searching for truth, and decided to join thousands of other Mormon young people as a missionary. I was sent by the Mormon leadership to the Santiago Mission in the northern half of the Dominican Republic for two years. It was in the Dominican Republic that my love of nature and ecology blossomed. The tropical green and lush biodiversity set my mind on fire for the earth, and my spirituality became deeply connected to creation.

When I returned from my missionary experience, I was determined to get married and live the Mormon dream, so I attended Brigham Young University in Provo, Utah. Fascinated by photography and linguistics at the time, I eventually decided to major in anthropology with a minor in international development so that I could continue to explore the relationship between people and the environment. During my fourth year, I was lucky enough to be part of a summer field school in the Western Highlands of Guatemala. My project looked at the power dynamics between traditional Mayan and government-sponsored forestry practices. However, what really fascinated me was forests as both complex ecosystems and powerful spiritual ecologies.

For my master’s work, I continued to explore this passion by earning joint degrees in forestry and theology at Yale. The work of Mary Evelyn Tucker and John Grim, scholars of religion and ecology was instrumental to my development as a scholar and spiritual ecologist. My writing at the time explored both Mormon eco-theology and the LDS sacred grove as a Sacred Natural Site. I also worked with the Inter-tribal Timber Council, which promotes economic and ecological sustainability among timber producing Native American tribes.

After my first graduate work, I moved back to Utah and taught ethics and religion courses at Utah Valley University and Salt Lake Community College. I also managed to get a job as a forester for the US Forest Service during the summer months. It was such an amazing balance between my passions! It was at the beginning of this phase that I decided to officially walk away from my practice as a Mormon after many years of doubt and prayer. I immersed myself in the mountain forests of Utah and began a meditation practice.

While I was in Salt Lake, I had a very powerful experience in the Cathedral of the Madelaine in Salt Lake City. I also began reading Thomas Merton, a 20th century Trappist monk who wrote about the power of silence and contemplation in a Christian context. I never knew that Christianity had a contemplative tradition, and I began to pour over the mystical and contemplative classics. Merton’s love for his monastery landscape in Kentucky and his practice of photography deeply resonated with my own experience, and I eventually began attending Catholic and Anglican Masses and centering prayer groups.

Despite loving my work as a professor and forester, there was not a lot of advancement opportunities, job security or paid benefits in either post. Eventually I decided to apply for a PhD program in Vancouver, British Columbia. In 2013, I packed up my truck and moved to Vancouver and began my program with the Institute for Resources, Environment and Sustainability (IRES) at the University of British Columbia. My supervisor was an interdisciplinary anthropologist, and she allowed me a lot of room to develop my ideas and interest in spiritual ecology and the environmental humanities. I graduated in 2017, and my dissertation research focuses on the spiritual ecology of monastic landscapes in the American West. My additional research and writing interests include ethics, eco-theology, religion/spirituality and ecology, phenomenology of landscapes and sacred sites, forest studies, and contemporary debates surrounding nature and wilderness.

In 2015, I officially became a Roman Catholic, but have been attending the Anglo-Catholic Parish of Saint James in the Downtown East Side of Vancouver for about two years now. It was during my time in Vancouver that I began the Holyscapes Project which has come to be a personal exploration of my soul through the landscape. In my day to day life and my travels, I look for the convergence of place, ecology and spirituality, particularly through the Christian contemplative and mystical traditions. I am currently teaching Environmental Ethics at Simon Fraser University, and discerning a vocation within the Anglican Communion.

In a time of environmental catastrophe, spiritual despair, political farce, and racial injustice, the convergence between interior and exterior, body and mind/soul, self and other, self and world become a powerful point of analysis of the world in which we seek to dwell. How might a deeper sense of the world’s holiness contribute to healing hearts and ecosystems? The Holyscapes Project is an attempt to explore this terrain.

In my own experience, I have always been fascinated by places set apart: churches, temples, synagogues, cathedrals, historic sites, national parks, rivers, oceans, and particularly, forests. Place and space have a profound impact on how we feel, what we believe and our ethics. Against any kind of dualism between spirit and matter, I have always felt that the interior is intimately connected to the exterior, like a kind of oscillating spectrum. Jesuit poet Gerard Manley Hopkins coined the term Inscape, similar to my own Holyscape, as a kind of Holy finger print that each creature brings into the world, its uniqueness or as Franciscan scholastic theologian Jon Duns Scotus called it, a beings Haecceity (Hek-see-a-dee).

The Holyscapes Project seeks to think about, explore, teach and advocate the many ways in which human beings can deepen our connection to the Holy through place. By paying attention to the places we spend time, by exploring new places, by making more time for prayer, contemplation and art, and by seeking to defend the places under threat, we are engaging in reclaiming the world and all its holiness, in hope for a livable future.

The Holyscape Project and its methods to moral and spiritual connection should not be seen as sufficient in itself in response to the ecological crisis, but forms part of a broader strategy of social-ecological change. It is however essential to the endurance of activism to be rooted and nourished by the spiritual traditions in order to continue the daunting work that must be done.