Here are a few games and teaching ideas to encourage skip counting.

We played this all the time when I was growing up.  The leader announces starting and finishing numbers and which numbers will be ‘buzz’. For example, we might start at 1, finish at 100, and say buzz on numbers that are multiples of 5. Students stand in a circle to count in turn by ones, but they say buzz instead of the specified numbers.

If a student forgets to buzz, they are out of the game. Last one standing wins.

This is a variation of Buzz. The rules are the same as for Buzz, but we buzz on some numbers, bizz on others and bizzbuzz when both are required.

This is an activity which assists children to move from orally counting by ones to skip counting. When counting from the starting number to the finishing number the children whisper the numbers that are not part of the count and say loudly the numbers that are part of the count. For example: If counting by twos the children would whisper the odd numbers and say loudly the even numbers (in bold): 1 2 3 45 67 8 9 10.

In the following example the students are using Whisper Count to count by twos starting at 2 and stopping at 20.

Initially, record all the numbers from 2 to 20.

Have your child circle the numbers that are part of counting by twos, starting with two.

Starting at one, you and your children whisper the odd numbers and say loudly the even numbers forwards from 2 to 20 and then count backwards from 20 to 2. Gradually increase the range.

Starting, finishing and counting sequences can be changed according to the needs of your children.

How far can you go?

Give your children  a strip of coloured paper or a roll of paper. They record a counting sequence as far as they can. You can assign the counting sequence and starting number or may allow them to choose their own. You can restrict the amount of time spent on this activity or allow children to explore the pattern as far as they are able. Writing the numbers vertically assists the students to focus on any patterns that are formed. 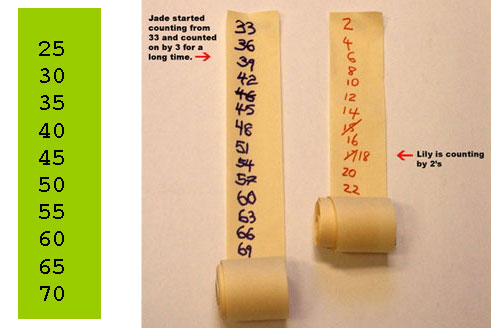 After students have completed their strips you might ask questions such as:

Using the Hundreds Grid for Counting

On the Hundreds Grid below a child has started to place red counters on the fives counting pattern which will assist them to count fluently by fives. When children have said and recorded their counting sequences, you can ask questions such as: