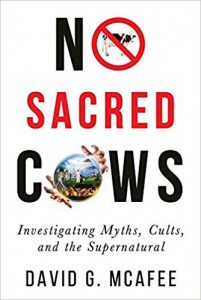 No Sacred Cows
Investigating Myths, Cults, and the Supernatural 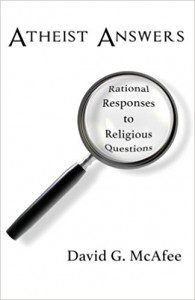 Whether you’re a non-believer interested in activism or a religious fundamentalist who wants to learn about the “other side,” Atheist Answers is perfect for you. The book contains hundreds of questions frequently asked of atheists, as well as answers from an atheist author and seasoned heathen. Some of the questions David G. McAfee answers include: “Why did you decide to become an atheist?” “What is the attitude of atheists towards religious people?” “Do you have to dislike religion to be an atheist?” “Why don’t you believe in God?” “If there was a Heaven, would you want to go?” “Can you imagine how the world would be without religion?” “What if there is a God?” “What about my answered prayers? Aren’t those enough proof of God?” “Do you believe in reincarnation?” “Doesn’t it take faith to be an atheist?” … and many, many, more! 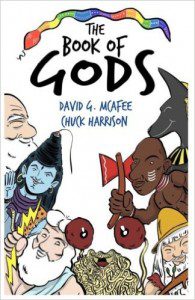 The Book of Gods
by David G. McAfee
What are gods and why do people believe in them? Where did they come from and what do they do? This book answers all those questions and more! David G. McAfee, who studies religions and writes books, has teamed up with writer and cartoonist Chuck Harrison to help everyone learn about beliefs, gods, and religion! The first book in this series was The Belief Book, which is all about why people believe the things they do, and now they are taking the next step by bringing you The Book of Gods… It doesn’t matter how old you are. If you want to learn more about gods from around the globe, including where they came from and how belief in them has spread over time, this easy-to-read book is for you! The fully illustrated and interactive Book of Gods is for readers and thinkers of all ages, including kids and kids at heart. 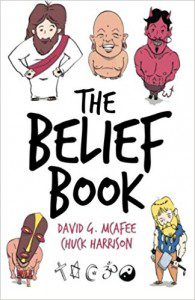 The Belief Book
by David G. McAfee
What is belief and why is it so important? Where did it come from and what does it do? This book answers all of those questions and more! David G. McAfee, an author who studies religions, teamed up with writer and illustrator Chuck Harrison to create The Belief Book. No matter how old or how young you are, this easy-to-read book can help you learn more about religions and gods and beliefs in general. It will also teach you about something called The Scientific Method, which is how we learn new things about the world! By the time you’re done reading you will know the answers to some of life’s biggest questions, but more importantly you will see why your questions, and all questions for that matter, are so important. This book is the first in a series of books all about belief, gods, and religion. The fully illustrated and interactive Belief Book is for readers and thinkers of all ages, including kids and kids at heart. 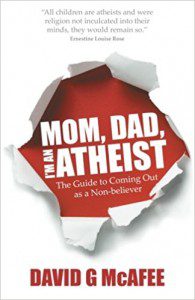 Mom, Dad, I’m an Atheist
The Guide to Coming Out as a Non-believer

This essential guide to coming-out as a non-believer has been written to make it easier for atheists, agnostics, freethinkers, and non-believers of all ages and backgrounds to be open about their non-religiosity while minimizing the negative interactions in familial, social, and professional circles.
As a survival guide for non-believers who wish to come out, this book provides advice and resources for those interested in publically rejecting religious dogma as well as real stories from non-believers who have experienced coming-out to less-than-supportive family or friends.
Whether you’re new to disbelief and looking for the cleanest possible break from your former faith or you’re a lifelong atheist who wants to establish a sense of community with like-minded people, this guide provides useful resources including: tips for handling potential conflicts with believers, the author’s answers to some of the most frequently asked questions on behalf of believers, and numerous references to support groups, services, and advocacy organizations dedicated to non-theists.
From dealing with grief from a secular perspective to handling potential clashes in religious worldviews between significant others, this book offers multiple perspectives from non-religious individuals who have generously shared their experiences to help those atheists who may find themselves in similar situations. 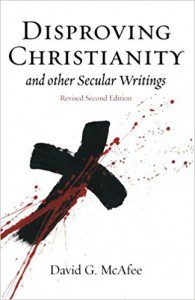 “Not only do I believe that it is possible to maintain moral standards without the crutch of religion but I would argue that it is the only way to achieve true goodness.” Disproving Christianity and Other Secular Writings compiles popular and lesser-known arguments against the principles established by the Christian canon. Using a phenomenological approach to build his case based on in-depth study at the University of California, Santa Barbara McAfee analyzes the Hebrew Scriptures and New Testament doctrine to build a logical and reasonable case against their validity. From contradictions between lived and portrayed religions to factual errors within the texts themselves, no stone is left unturned in this fully updated and expanded refutation of Christianity.