Franklin Graham’s Sermon To The Masses 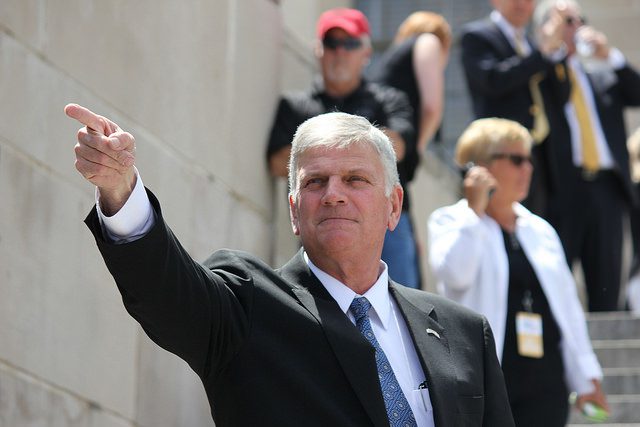 In a dream I saw Franklin Graham deliver this sermon:

It’s extremely clear to any Bible reader that God used men of questionable morality to forward God’s projects in the world.

Here’s a reminder of a few biblical heroes and their notable sins:

Noah was a drunk

Abraham pimped his wife as his ‘sister’

Lot had sex with two daughters, impregnating both

Lot offered his daughters to a mob of rapists

Jeptha burned his daughter to cinders as an offering to God

Isaac had a favorite between two sons

Jacob was an inveterate liar

Samson was a womanizer

Moses was a murderer

Joshua was a murderer

David was a murderer

Elijah was a murderer

Elisha was a murderer, releasing two bears on 42 kids

Gideon was a murderer

This list could be lengthened by another half dozen, but it serves. Trump does not rise to the level of biblical heroes’ immorality, but God can work with Trump because Trump really does have the Sinner’s Élan. Trump has an eagerness to ‘sin boldly,’  as Protestant champion Martin Luther advised.

Since God chose Trump, we can read the mind of God and know God’s plans for the USA.  Here’s a rough forecast of what God wants to get done with Trump:

Cut taxes on one million billionaires

Dump regulations that prevent companies from endangering their employees

Construct a partition in the middle of the Rio Grand

This should be enough for God to get accomplished with Trump. God may indeed have more radical twists up his sleeve for the Trump years.

And we cannot wholly rule out the ill effects of devilish Democrats who might try to thwart the good intentions of God and God’s earthly proxy, D. J. Trump.

We have only to sit back and relax and let God’s political playbook unclasp itself in the mystifying movements of President Donald Trump.

Just as God chose morally inept men in Bible days, God still does. God works in mysterious, furtive, cryptic, and even cagey ways, much like ‘the old fantastical duke of dark corners’ in Shakespeare’s Measure For Measure.  That’s a solace. ”

January 6, 2019
If The God Idea Only Just Now Dawned On Us
Next Post

January 14, 2019 The New And Improved Evangelical Play Book
Recent Comments
0 | Leave a Comment
Browse Our Archives
get the latest from
Humanist Plus
Sign up for our newsletter
POPULAR AT PATHEOS Nonreligious
1