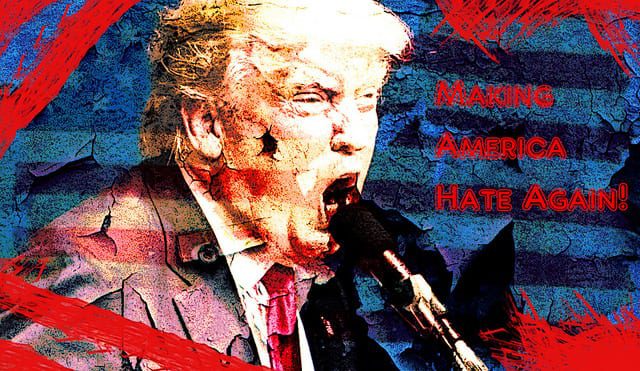 Did we ever imagine that ‘Make America Hate Again’ could refer to religious hatred of Donald Trump?

Question: Has The Object of Hatred really said or done anything warranting hatred?

Answer: Yes. The Object of Hatred has uttered as many errors as words and has offended in every syllable and gesture.

Question: Is The Object of Hatred hated as a whole or merely for one defective part?

Answer: We hate only his guts.

Question: Is there some remedy whereby The Object of Hatred can appease you haters?

Answer: May God absolutely forbid this, but The Object of Hatred could step through the portal of death and claim his eternal reward sooner rather than later. A slip on ice would serve. But God forbid.

Question: Do you intend any violence to The Object of Hatred?!

Answer: No! Only daily reprimands and nightly tongue lashings, but no laying on of hands for bodily injury, and no suborning of such a thing.

Question: What is the expected term of your hatred?  When will it end?

Answer: Our hatred should end in months, years, or never.

Answer: Yes. Residual disappointments mar friendly and familial affairs all over the land.

Question: Has The Object of Hatred extended any ill effects beyond the U.S.A. borders?

Answer: Yes. The Object of Hatred has infected to the North Star.

Question: Isn’t it your fault that you are so filled with loathing for The Object of Hatred?

Answer: It is not our fault. The hatred that somberly ornaments the USA and drapes its religious citizens in muted colors is The Object of Hatred’s own fault—aided and abetted by his detested, bungling, perfidious epigones.

February 2, 2019 Bible Literacy GOP Style
Recent Comments
0 | Leave a Comment
"The Capitalisations are not Random. Also, No, He is simply mocking Christians, and using the ..."
skwills Are Liberal Christians The Most Dishonest ..."
"You can't seriously be comparing mythology to actual observable science can you? It should be ..."
DJKong Are Liberal Christians The Most Dishonest ..."
"As to your first sentence, I am a non catholic, but sadly, I have had ..."
Judgeforyourself37 Limbo: Neither Here Nor There, But ..."
"If I recall correctly, according to Catholicism any Catholic can baptize a baby or perform ..."
C Nault Limbo: Neither Here Nor There, But ..."
Browse Our Archives
get the latest from
Humanist Plus
Sign up for our newsletter
POPULAR AT PATHEOS Nonreligious
1