Humanist Robert Ingersoll (and the GOP) 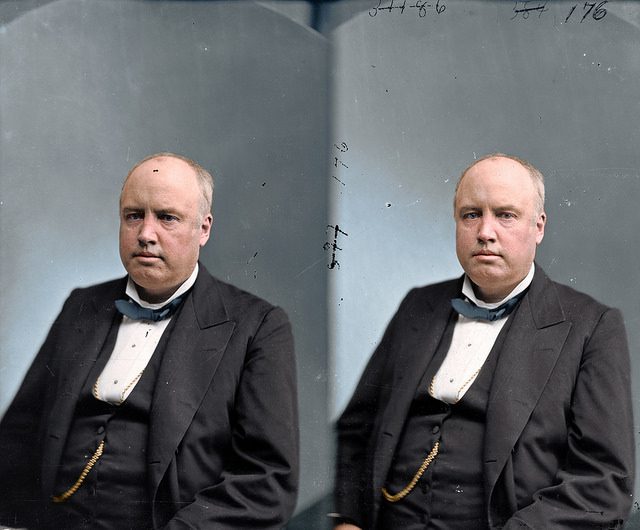 He was a humanist, an agnostic, a colonel at the battles of Shiloh, Corinth, and Lexington, a personal friend to three Presidents, hosting elaborate dinner parties for elites in literary, musical, dance, and theatrical arts, along with captains of industry, Senators, Justices, Cabinet members—all crowding Ingersoll’s Washington and Manhattan mansions.

Ingersoll was an advocate for the women’s vote, a friend to immigration, a sponsor of low tariffs, a promoter of complete emancipation and equal status of African Americans, a defense lawyer to those accused of blasphemy, an internationally read author.

He was also a dyed in the wool Republican and an avowed foe of Christianity.

Wait. What? A Republican and an avowed foe of Christianity?

Yes. Ingersoll, son of a preacher, had read all the trenchant critiques of Christianity as a young man and found them persuasive. After Voltaire and Paine and Palmer and Ethan Allen, no argument for Christianity held any sway with Ingersoll.

Following his baptism into agnosticism and his release from the religious dogmatism of his youth, Ingersoll said he felt ‘infinitely free’ and admitted he ‘could exist without God just as well as God could exist without me.  He went on: ‘I also feel that if there must be an orthodox God in Heaven I am in favor of electing him ourselves. I am as much opposed to an autocrat [in the] hereafter as now.’

He decided upon a life on the speaker’s platform.

He was by all accounts the best orator in the nation and perhaps one of the best public speakers any time anywhere. He had both a first-rate personality and a fine intellect. His gifts were his mind, his wit, his humor, and his fine voice.

Here is a selection of praise from his contemporaries:

‘I was never so stirred since I was born…Oh it was the supreme combination of English words that were ever put together since the world began…Lord, what an organ is human speech when it is played by a master’—Mark Twain

‘With everyone in the audience I was entranced’—Clarence Darrow

‘A real orator, a master of the art’—Albert Beveridge

‘He bantered us, challenged us, electrified us. At times his eloquence held us as silent as images, and then some witty turn, some humorous phrase, brought roars of applause. At times we cheered almost every sentence…At other moments we rose in our seats and yelled…His power over his auditors was absolute’—Hamlin Garland

‘The incisiveness of his wit, the irresistible ludicrousness of his similes… We have never heard a speaker who could so easily excite his audiences to laughter’—Sacramento Daily Union

‘One laughed in spite of himself, at the irreverent way he treated the holy things of our mind’—Des Moines Leader

‘He set tens of thousands to thinking for themselves on religious subjects’ and had ‘pricked the bubbles of many ecclesiastical and theological shams’—Rev. J. T. Sunderland

Ingersoll paid for his mansion in Washington and his mansion in New York City from fees collected on speaking tours, delivering two-hour lectures for each of dozens of topics, most of which criticized Christianity.

Thousands upon thousands came to hear him speak in cities across the country, and local reports over and over spoke of ‘immense audiences’ and ‘the largest audience ever assembled’ and of theaters ‘packed from pit to dome’ to hear Ingersoll.

Most of the people in these audiences were themselves Christian listening to a non-Christian analyze and lampoon Christianity. Audiences everywhere, despite themselves, resounded in laughter.

Through all this he was an ardent supporter of Republican causes and candidates.

Here is a question that will underscored differences between late nineteenth century politics and our own:

Why  could  Robert  Ingersoll  never  nowadays  find  shelter  beneath  the  consecrated  roof  of  the  GOP?

March 15, 2019
Jesus Surrendered Without Incident And So Should ...
Next Post

April 15, 2019 The Atheist & The Humanoid God
Recent Comments
0 | Leave a Comment
"I think you need to research what Barrett has been immersed into. Like all religions, ..."
David Hume Amy Coney Barrett’s Religion
"Religion cannot shut up about politics because the sole point of religion is power."
Brian Shanahan Can Religion Keep Quiet About Politics ..."
"I don't know where you get your information from but Catholics do not follow these ..."
George Finn Amy Coney Barrett’s Religion
"Scalia was bad enough."
Jim Jones Amy Coney Barrett’s Religion
Browse Our Archives
get the latest from
Humanist Plus
Sign up for our newsletter
POPULAR AT PATHEOS Nonreligious
1