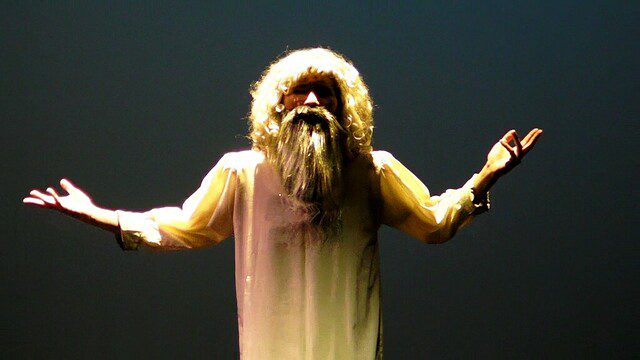 Polytheists say there are many Gods, as many as you like, into the millions if you prefer, perhaps billions, one for every pair of human eyes. You may worship and adore all the Gods.

Henotheists admit many Gods too, but you may only have time to devote yourself to one, and that’s okay because these are not self-doubting, jealous Gods.

Kat-henotheists also acknowledge many Gods, but you should dedicate yourself to a single God at a time, moving from one God to another God at different periods of your life, perhaps during the life phases offered in As You Like It by Shakespeare’s intellectualist idler, Jaques, who espies seven stages of life, beginning with infancy and ending in the second childishness of old-aged senility, ‘sans teeth, sans eyes, sans taste, sans everything.’ There are Gods aplenty for each stage.

Trinitarians affirm one God but this God is to be worshiped and adored in three persons: Father, Son (Jesus), and the Holy Ghost. To other monotheists like Jews, Muslims, Sikhs, Bahais and Caodais (and to polytheists and atheists too), Trinitarian math is elusive (1+1+1=1) and susceptible to being labelled a petite polytheism of three distinct Gods. Trinitarians vigorously defend the oneness of three.

Dualists acknowledge two Gods, one very Good and the other one very Evil. The need for two rests upon the world’s oscillation between beauty and ugliness, delight and dread, kindness and cruelty, irises and Ebola viruses. In a family of Dualists you may hear the following dialogue: Child: ‘Mommy, did the good and compassionate God create the talon, the fang and the claw? Did the God of love create the malarial mosquito?’ Mom: ‘No, sweetie, the other God, the God of cruelty, made those.’ As if you needed to be told, you should adore the very very Good God.

Monotheists declare there has only ever been one good God to worship and adore. Several distinct and opposing monotheistic religions claim this God and define God in different ways, with many different hues.

Dystheists say there’s one God who is not really all that good, given conspicuous evidence from our bloody red in tooth and claw, predator-prey natural world. Adore with caution.

Deists insist there is one God who created the universe but thereafter took no interest in it. You do not adore this God because this God cares nothing about you, either because he doesn’t know you exist, or because he cares about you as much as he cares about the life of an oyster or a gnat (with due apologies to The World Parliament of Insects, Mollusks, & Affiliated Clam Culture).

Daoists maintain that God is not a person at all but an impersonal Force that pervades the universe and may be tapped-into by humans but requires no adoration. (Cf. Yoda, Obi-Wan Kenobi, and Rey of the Star Wars mythos.)

Extra-Terrrestrialists say that what humans have been calling ‘Gods’ are actually space-visiting galactic beings who used modest ingredients and measuring spoons to un-miraculously originate life on Earth and thereafter vacationed in rural New Mexico.

Monists proclaim there is only one item in existence: God. God is everything, everything is God, and everything is only one thing, God. Variety is a delusion, and all the words we have for the many existent things are superfluous. Thin the dictionary to the letter ‘g’ and the word ‘God.’ (Pantheism is different in that it admits the existence of many things).

Anatheists say God cannot be rendered into any image or concept, because the God that can be imagined is not the real God. Our mystics proffer this deity and claim to adore God immediately, that is, without the mediation of holy saints, holy buildings, holy worship services, holy bells, books and candles, or even thoughts and words. Mystics claim an ineffable experience and then those who are able write inch-thick books describing it.

Apotheosis-ites say all Gods were once humans who at some point achieved apotheosis, elevation to divinity. Adore the worthy ones. (Some Buddhists may be here, and Mormons.)

Atheists find no persuasive arguments for God, no convincing idea of God on offer in six thousand years, and therefore say there must be no Gods. (Some Buddhists may be here).

Agnostics remain unconvinced by every argument for God’s existence but prefer to withhold judgment as to whether God exists. An agnostic is no kind of believer in God and does not hedge his bet by attending religious services or by praying, just in case there’s a God.

Skeptics doubt not only avowals about God but all claims to all knowledge. A Skeptic might say, ‘You you claim to know God exists and you don’t even know if Charlemagne existed!’

Humanists and Freethinkers are likely atheists and agnostics and skeptics and unbelievers but prefer ‘positive’ titles of self-designation. They say no one needs to label themselves based on what they reject or disbelieve, and so they do not called themselves atheists, agnostics, skeptics, or unbelievers.

Ignostics advise us to give up the word ‘God,’ rub it from the world’s lexicons, and never utter it again. Why? Because it has been proved, over many thousands of years, that humans are utterly ignorant about what the word ‘God’ signifies, as indisputably established by our extensive disagreements concerning God, evinced in this very roster of twenty-one. Ask an ignostic, ‘Do you believe in God?’ and the response is, “I don’t know what you mean by the question.’

April 29, 2019 Old Man Jesus
Recent Comments
0 | Leave a Comment
"Religion cannot shut up about politics because the sole point of religion is power."
Brian Shanahan Can Religion Keep Quiet About Politics ..."
"I don't know where you get your information from but Catholics do not follow these ..."
George Finn Amy Coney Barrett’s Religion
"Scalia was bad enough."
Jim Jones Amy Coney Barrett’s Religion
"I prefer to use "Religious Skeptic" for people who are actively or strongly philosophically atheist. ..."
Kevin R. Cross Such A Small Thing Made An ..."
Browse Our Archives
get the latest from
Humanist Plus
Sign up for our newsletter
POPULAR AT PATHEOS Nonreligious
1