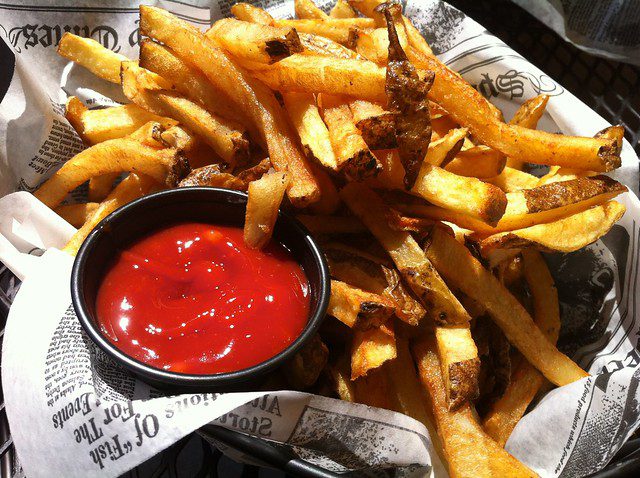 The fry cook was old. He had been around since Noah was a sailor. He was a man of un-muzzled thoughts, and one day he asked the smoke-choked clientele this question:  “Which of ten thousand past, present, and future religions is the True Religion?”

The jangled assembly, having already burnt their cheeks flush by the monarch of the vine (plump Bacchus with his red eyes),  sang out in four distinct replies:

Customer A:  “Only one religion is true and coincidentally it’s mine!”

This customer went on to say:  “True religious claims are found in the doctrines of one religion (mine!) and that religion (mine!) is uniquely privileged. True, up to this very moment, no person in any given religion has been willing to concede that another religion is the exclusively true one. And so we might say the matter comes to an intractable impasse. Even so, to me, mine is the only true religion!”

Customer B:  “One religion is truest (mine) though a few other religions like yours and perhaps hers may be somewhat true!”

Customer C:  “All religions are true, even yours, remarkably!”

This customer went on to say:   “Religions are multiple paths to the same truth: multiple trails to the same mountain peak at the same location, as, say, Mt. Annapurna.  Or religions are multiple paths to different truths: multiple trails to different mountain peaks on totally different continents, as, say, Mt. Everest and Mt. Fiescherhorn and Mt. Kilimanjaro and Mt. Cotacachi and Mt. Whitney. My view is very kind and desires not to hurt anyone’s feelings, not even the feelings of long-dead ancient Sumerians, Egyptians, and Greeks, all of whom had true religions. However, my position would seem to be logically impossible because religions make contradictory claims. Do people have one afterlife or multiple afterlives via reincarnation? Is there one God or many Gods or zero Gods? Is hell temporary or eternal? Is sexuality an obstacle on the path to spiritual alertness, or is sexuality the path itself?  No matter. I define ‘truth’ functionally, and since all religions function for their practitioners, all religions are true.”

Customer D:  “No religion is true, not mine for the obvious reason that I don’t have one, and especially not yours or hers!”

This customer went on to say:   “I speak for skeptics, atheists, agnostics, secularists, humanists, all of whom consider religions to be invented cultural compositions that might here and there offer true statements about particulars in morals, meditation, and yoga poses but are not true in any larger, general, metaphysical, or super-natural sense. But if we skeptics doubt all truth claims, we should probably also be skeptical about the claim that skepticism is true. If skepticism is true, we skeptics shouldn’t say it like we’re right. We should rather say, ‘This might actually be false: But I’m pretty sure skepticism is true.’ “

Then the wise old cook, a man of untiring and continuous goodness, spoke to all the customers:

The crowd knit their ears to his experienced tongue, listening, and then they sank fresh fries deep into dollops of Malayan and Taiwanese ketchup, and ketchup from the Keeling Islands too.

A few colorful lines were taken from Shakespeare.

May 7, 2019
The Necessity Of The Small Dissent
Next Post

June 2, 2019 Atheists & Humanists In Good, Elegant Company
Recent Comments
0 | Leave a Comment
Browse Our Archives
get the latest from
Humanist Plus
Sign up for our newsletter
POPULAR AT PATHEOS Nonreligious
1