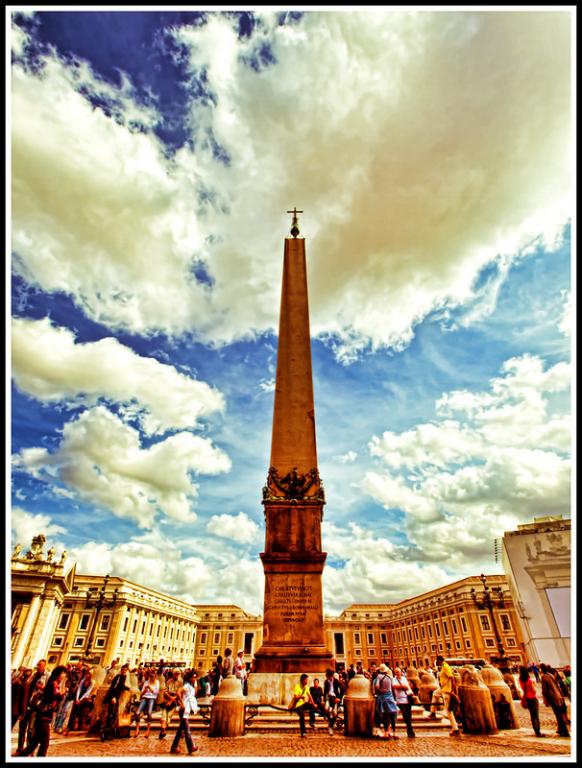 A A huge monument sat at the center of St. Peter’s Square, replacing the ancient obelisk.  Deeply etched around the top of the memorial were the following words:

As  Perpetrators  We  Mourn  Our  Victims

Beneath these words were the names of the known casualties of Christian violence—those killed or maimed in body or in spirit by the ferocity of Christian certainty: the heretics, the pagans, the heathen, the infidels, the witches, the savages, the unbelievers, the servants of Satan.

And beneath these names were symbols signifying thousands of the nameless victims of theistic violence.

And finally, beneath all else were symbols for the unknown children, spouses and loved ones of those killed or targeted, for these lives too had been devastated.

All  these  were  the  New  Humanist  Saints.

A silent crowd pressed into St. Peter’s Square, among whom were leaders and followers of all Christian denominations.  In the window above the basilica the Pope intoned the solemn litany and began:

‘We do penance for the murder of Bishop Pricillian.’

The people beat their chests and replied, ‘We are heartily sorry.’

‘We do penance for the murder of Geoffrey Valle.

‘We do penance for the murder of Domenico Scandella.’

We do penance for the murder of Christine Boffgen.’

‘We do penance for the murder of Pietro Pompanazzi.’

‘We do penance for the murder of Lucilio Vanini.’

‘We do penance for the murder of Munzmeister Lippold.’

We do penance for the murder of Noel Journet.

And so on—of the known names. And then to the unknown:

‘We do penance for the unknown killed in Christ’s name.’

And this was repeated over and over and over again.  After this litany, which lasted forty days and forty nights, the Pope addressed the Christian world with these words:

‘Brothers and sisters:  Laced among the lofty admonitions to love in our sacred scriptures lie passages that recommend intolerance and even violence toward those who do not think or act like us.  It is a credit to the decency of most Christians—in each generation of Christianity—that they have not acted on these passages.  In this sense, we can say that most Christians are better than their religion.  Human goodness is stronger than any creed.

Unfortunately a minority of Christians (in every age of Christianity)—let us call them the rare and the deviant—allowed such passages to fuel religious ferocity.  To restrain this indecent minority in our own day, and forevermore, we ask that the decent majority of Christians make explicit what they accept tacitly; namely, that parts of our sacred scriptures are not sacred, are not revelatory, and are indeed sub-ethical and immoral by present-day standards.  If we Christians admit this and our leaders preach it, then perhaps religious violence will cease.

And now, our penance.

Our atonement for the Centuries of Violence will be a Century of Silence.  Churches (Orthodox, Catholic, Protestant) will be draped in black, their lights dimmed. Devotees may enter the sanctuaries, but no speech is to be uttered.  No words of liturgy.  No services.  No whispered prayers.  No hymns.  There will be no published works.  No theology.  No encyclicals.  Not a word from the Churches for one hundred years.  Bittul ha-tamid.  All this in penance for the murder and the honor of the martyred New Saints.  For all those who live in this Century of Silence, consider yourselves fortunate to contribute to the atonement.’

Then the Pope awoke from the dream.  Sitting upright, the Pope gasped in shocked certainty and quoted Saint Jerome’s Vulgate translation of 1 John 3:15:

Everyone  who  hates  his  brother  is  a  murderer.

February 23, 2020
Does The Future Demand A Sacrifice?
Next Post

March 18, 2020 Teaching Remotely & Remotely Teaching
Recent Comments
0 | Leave a Comment
Browse Our Archives
get the latest from
Humanist Plus
Sign up for our newsletter
POPULAR AT PATHEOS Nonreligious
1