David Mamet Exchanges One Herd for Another

The National Review has a must-read cover story on David Mamet’s (de)evolution toward conservatism, and despite my loathing of everything the magazine stands for, Andrew Ferguson does a marvelous job of putting Mamet’s beliefs into context, and exposing his subject’s reasonings and inconsistencies.

And that’s what catches my eye. For as something of an idiosyncratic liberal (my sympathy for nation-building, my alignment with Sam Harris on our conflict with radicalized Islam, and other positions which I feel stem from a liberal humanism but challenge liberal orthodoxies), I can see why Mamet feels like he must turn accepted conventions of progressivism on their heads, but the evidence from Ferguson’s piece suggests that Mamet has, as Ferguson even suggests, traded one set of unquestioned tenets for another.

For example, in a new book, Mamet goes on the attack against Bertolt Brecht, a hero to we theatre folk for his revolutionizing of the form, and to liberals for his attacks on capitalism and war. But Mamet saw a problem. From the National Review piece:

The reverence came to an end when [Mamet] finally noticed an incongruity between Brecht’s politics and his life. Although a cold-blooded—indeed bloody-minded—advocate for public ownership of the means of production and state confiscation of private wealth, he always took care to copyright his plays. More, he made sure the royalties were deposited in a Swiss bank account far from the clutches of East Germany, where he was nominally a citizen.

“His protestations [against capitalism] were not borne out by his actions, nor could they be,” Mamet writes. “Why, then, did he profess Communism? Because it sold… .”

This is disingenuous, it seems to me. I don’t profess to know anything about Brecht’s biography, but at least in the abstract, this much is true: Brecht was not operating within a communist utopia, he was operating in a world in which one had to protect one’s work within the context of capitalism and ownership. What does Mamet expect? That Brecht should have thrown his works into the public domain and denied himself an income all in the name of ideological consistency? To do so would have been akin to playing under the rules of baseball in the middle of a football game. One must operate within the world in which one finds oneself. Does Mamet propose to deny himself the use of highways and police protection because he doesn’t like the government?

Later in the piece, Mamet rails against what truly sounds like a ridiculous example of local government overreach that truly was absurd, involving the regulation of how folks had to maintain their hedges on private property. But Mamet takes this aberration and inflates it to represent “all government”:

“It made no sense,” he said. “But this is how government works—all government. I saw there’s no difference between the hedge commission and the U.S. government. It’s all the same principle.”

No it’s not, actually. Local pols over-regulating something banal for whatever parochial reason is not, in fact, the same as, say providing for the common defense, guaranteeing basic human rights, or even regulating the monstrous health care industry. This is the kind of overgeneralization that Mamet seems to think is a unique sin of liberals.

Mamet focuses very much on what he sees as the ‘liberal herd,’ in which folks of one ideology react in tandem regardless of even their own best interests. Lefties like myself attribute this kind of behavior much more to the right, particular in regards to teabaggers or theocrats. But Mamet thinks that the right’s uninformed mob rage is less of a problem than, say, liberals’ nausea over the prospect of a Palin vice-presidency:

“So I was watching the [2008] debates. My liberal friends would spit at the mention of Sarah Palin’s name. Or they would literally mime the act of vomiting. We’re watching the debates and one of my friends pretends to vomit and says, ‘I have to leave the room.’ I thought, oh my god […] This is the reaction of the herd instinct. When a sheep discovers a wolf in the fold, it vomits to ward off the attacker. It’s a sign that their position in the herd is threatened.”

Mamet runs into the herd instinct every day.

“I’ve given galleys of The Secret Knowledge [his new book] to some friends. They say, ‘I’m scared to read it.’ I say, ‘Why should you be afraid to read something?’

“What are they afraid of? They’re afraid of losing their ability to stay in the herd. That’s what I found in myself. It can be wrenching when you start to think away from the herd.”

As one who wanders regularly from the herd, I agree, it can seem wrenching if one cares about what the rest of the herd thinks. But Ferguson does a service by putting a mirror up to Mamet’s complaint:

The conversion is complete: This is not a book by the same man who told Charlie Rose he didn’t want to impose his political views on anybody. At some moments—as when he blithely announces that the earth is cooling not warming, QED—you wonder whether maybe he isn’t in danger of exchanging one herd for another. He told me he doesn’t read political blogs or magazines. “I drive around and listen to the talk show guys,” he said. “Beck, Prager, Hugh Hewitt, Michael Medved.”

Yeah. You think global warming is a hoax and you listen to Glenn Beck and his raving ilk. Welcome to your new, angrier, dumber herd, David. Make sure you don’t get out of step. I hear this herd is particularly merciless to its own when they stray.

May 14, 2011
Romney and Gore as Victims of Bullying
Next Post

May 20, 2011 It's Not Really about the Toy
Recent Comments
0 | Leave a Comment
Browse Our Archives
Follow Us! 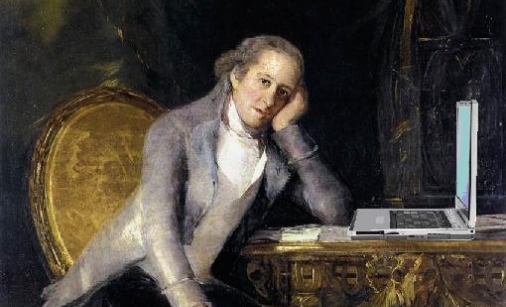 Nonreligious
One Man's Blogspam is Another Man's Engaging Content
iMortal

Nonreligious
"Into the Woods": Thoughts on What's Been Changed...
iMortal