Social Media and the Imprisoned Juggler

Speaking of whether social media can subsume one’s identity, I’m reminded of a piece from last year by Sara Scribner on “breaking up” with Facebook, and for so many of us even contemplating such a thing is fraught with anxiety and percieved peril. (I also wrote about this piece around the time it came out.)

Toward the end, she queries some young adults as to their dependence on Facebook, and is surprised to hear that many of them are not happy about life in Zuckerberg’s town:

One eloquently described his need to unplug but said that he could never even think about doing that for very long. “My friends would get worried,” he said. “They would think that something was wrong.” The way he described it, he was like an imprisoned juggler, perpetually condemned to keep the social networking and texting balls in the air. He couldn’t escape even if he wanted to. Would he – on unplugging — simply disappear?

If you’re like me, and eschew interaction in meatspace in favor of the life of the mind (and of bits), it can be scary to think of being outside of social media’s perpeutal cocktail party. Because if we percieve ourselves to exist digitally, cutting yourself off from social media removes a primary mode of defining that existence. And here you have the person in Scribner’s piece who she described as feeling “condemned,” and that if he left the FaceTwitPlusTumbl-o-sphere, he would cease to exist. Not literally of course, but he wouldn’t know who he is anymore.

I sympathize. Which is why it’s all the more important that if we choose to use these tools, such as Facebook, that we use them with intention. That means not passively accepting whatever the algorithm behind the curtain has designed for you based on your browsing and “liking” history, but actively seeking out the content and the people that matter, and populating it with content that doesn’t contribute to its Walmart-ification.

But most importantly, it means knowing and accepting who you are no matter what platform you’re using, be it in a browser, on a smartphone, or in the physical presence of actual breathing humans. I am still working on that.

August 8, 2014
The Spectacle of Ourselves: Social Media and the Superfluous Will
Next Post 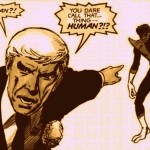 August 9, 2014 Of Muggles and Mutants: Sci-fi's Concern for "Better" Humans
Recent Comments
0 | Leave a Comment
"I know this is an old post....but I absolutely HATE my mac....much of it has ..."
annab Photo Management on the Mac Just ..."
"You sound like my son. I've loaned him a bunch of comics from the '60's ..."
Bob Jase Stuck Outside of the Comic Books ..."
"I always thought that Wells, otherwise a smart cookie, missed on the whole microbe thing ..."
Diamond Mike The Martians’ Singularity: Thoughts on “The ..."
"I feel your pain. I have always been an avid reader but a late entrant ..."
Mark in Ohio Stuck Outside of the Comic Books ..."
Browse Our Archives
Follow Us!