The Spectacle of Ourselves: Social Media and the Superfluous Will

Are we losing ourselves in social media? A lot of people feel that way, that we’re all just absorbing ourselves into some kind of swirl of ones and zeroes, and that our identities and individualities are being lost to “Big Data.” One way I’ve heard it put is that we’re all turning into the passengers on the Axiom.

Rob Horning at The New Inquiry addresses this, by way of his reading of Jean Baudrillard, a social critic from the previous few decades, who in the 1980s seems to have prophesied the coming of social media, with a number of predictions about what it would lead to, which I won’t get into here. Horning quotes this bit from Baudrillard, and it rings true:

This is our destiny, subjected to opinion polls, information, publicity, statistics: constantly confronted with the anticipated statistical verification of our behavior, absorbed by this permanent refraction of our least movements, we are no longer confronted with our own will. … Now, where there is no other, the scene of the other, like that of politics and society, has disappeared. Each individual is forced despite himself into the undivided coherency of statistics.

Horning applies this to the example of things like Facebook’s feed curation (and I’d say Google’s person-by-person search algorithms), in that they give us what their data says we ought to want before we’ve ever requested it. He calls it “postauthenticity”:

Even if the prediction is initially wrong, preferential placement in the platform, and the efficacy of the subsequent feedback loops can make it so … Postauthenticity (social media plus Big Data) makes our will superfluous.

Okay so that does sound pretty unsettling. I certainly don’t want to think of myself as passively and thoughtlessly having my online experiences doled out to me a) without being in control of it and b) without even realizing or caring that I’m not in control.

Facebook promises to entertain you, but it turns out that promise is synonymous with manufacturing demand. … Within that model is where power is exercised, modulating behavioral outcomes at the level of populations.

I actually agree with his diagnosis here, that this is indeed the power that Facebook wields, as does Google, and perhaps to a lesser extent Amazon, and Twitter even less so, until they decide to exercise more of their power and deny the “firehose” to users and aim for enforced curation.

But I don’t see it as a crisis, at least no more so than with any other mass media with which we’re already familiar. Horning, channeling Baudrillard, talks about social media as a system that serves our selfhood to us, in which “the masses enjoy the spectacle of themselves as a kind of consumer good.” Which is a heavy concept, but not new. What else is television if not the masses enjoying the spectacle of themselves, a spectacle that is sold to them through exposure to advertisements and paid subscriptions?

Obviously the difference is that on TV, we’re not watching “us,” we’re watching other people. But the reason we watch TV, see theatre, read books, etc., is to place ourselves outside of our normal worlds and into someone else’s, be it something wholly fictional or something based in “reality.” It is escapism, with varying degrees of escape versus engagement. We place ourselves in those modes of entertainment because, as we watch, where else could our “selves” be?

On Facebook and other social media, obviously we’re more “ourselves.” We present our faces, our names, our biographical information, our day-to-day comings and goings, our likes and dislikes, and anything else that delights us, upsets us, or somehow reflects something about us that we want to show the world.

It’s easy to get lost in the rathole of Facebook, as much as I loathe it on ethical and aesthetic prinicples. It’s easy to waste countless hours and unfathomable patience on Twitter. And yes, one activity in which one can get lost is in constructing one’s own “self,” the version of you you’re going to show the world. I know I do! I’m at least under the impression that when I do it, it’s quite deliberate. Other times I am sure I am being unconsciously guided and dazzled by algorithms being processed on distant server farms.

But at the very least I do have that power to decide what I will and will not expose myself to. I can construct my online identity, aware all the while that it is only a representation, and not a whole. I can waste time in the various services’ ratholes, but all the while understand that I can change what I’m allowing myself to see, exit it at any time, and if I choose, never return.

With television, you can choose what you watch, or whether to watch at all, but once that choice is made, the choosing ends. You go strictly into passive mode, where social media can be either passive or active, serendipitous (or with the illusion of seredipty) or intentional.

All this said, I think we did and continue to lose the masses to “the spectacle of themselves” with television. Snotty smartypants so-and-so’s like me have been complaining about the brain-rot of television since its advent, and rightly so. It’s a mind-deadener for most people, but for some, it can also be used for enrichment or engagement.

I don’t think social media is any different on that end. The poor “masses” will use it purely for the spectacle of themselves (and others of course), and some, perhaps relatively few, will use its power for more intentional, active purposes, for good or ill, just like with television, radio, and the printing press. Does Big Data and the hyper-curation of online experiences subsume people until they are lost? For many of us, yes, the will does become superfluous, and more and more so as these systems become more powerful. But they don’t, and I think won’t, subsume all of us. And that makes all the difference.

Unrelated side note: Horning makes sure to let us know how “frustrating” he finds Baudrillard’s byzantine style of writing, which I find fairly ironic considering how generally hoity-toity The New Inquiry is as a whole, and how in this same piece Horning himself writes things like this:

Maybe then, the way to resist the demand to make one’s subjectivity productive for capital is to use social media in a “hyperconformist” normcore way, emptying “self-expression” of its value for social-media companies and shifting the location of selfhood elsewhere by perpetually deferring its “genuine” expression.

August 6, 2014
EU's "Right to Be Forgotten" Hits Wikipedia, Blocking the Memory of the Web
Next Post 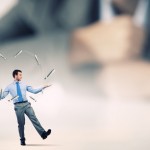 August 8, 2014 Social Media and the Imprisoned Juggler
Recent Comments
0 | Leave a Comment
"I know this is an old post....but I absolutely HATE my mac....much of it has ..."
annab Photo Management on the Mac Just ..."
"You sound like my son. I've loaned him a bunch of comics from the '60's ..."
Bob Jase Stuck Outside of the Comic Books ..."
"I always thought that Wells, otherwise a smart cookie, missed on the whole microbe thing ..."
Diamond Mike The Martians’ Singularity: Thoughts on “The ..."
"I feel your pain. I have always been an avid reader but a late entrant ..."
Mark in Ohio Stuck Outside of the Comic Books ..."
Browse Our Archives
Follow Us!