If Facebook’s algorithm is a brain, then Twitter is a stream of conscience. The Facebook brain decides what will and will not show up in your newsfeed based on an unknown array of factors, a major category of which is who has paid for extra attention (“promoted posts”). Twitter, on the other hand, is a firehose. If you follow 1000 people, you’ll see more or less whatever they tweet, at the time they tweet it, at the time you decide to look.

As insidious as it feels, the Facebook brain serves a function by curating what would otherwise be a deluge of information. For those with hundreds or thousands of “friends,” seeing everything anyone posts as it happens would be a disaster. Everyone is there, everyone is posting, and no one wants to consume every bit of that.

Twitter is used by fewer people, often by those more savvy in social media communication (though I’m sure that’s debatable), the content is intentionally limited in scope to 140 characters including links and/or images, and the expectation of following is different than with Facebook. On Facebook, we “follow” anyone we know, family of all ages and interests, old acquaintances, and anyone else we come across in real life or online. On Twitter, it’s generally accepted that we can follow whomever we please, and as few as we please, and there need be no existing social connection. I can only friend someone who agrees to it on Facebook (though I can follow many more), but I can follow anyone I like on Twitter whose account is not private.

Over the past few days, we have learned that there are significant social implications to these differences. Zeynep Tufekci has written a powerful and much talked about piece at Medium centered on the startling idea that net neutrality, and the larger ideal of the unfiltered Internet, are human rights issues, illustrated by the two platforms’ “coverage” (for lack of a better word) of the wrenching events in Ferguson, Missouri. She says that transparent and uncensored Internet communication “is a free speech issue; and an issue of the voiceless being heard, on their own terms.”

[The events in Ferguson] unfolded in real time on my social media feed which was pretty soon taken over by the topic — and yes, it’s a function of who I follow but I follow across the political spectrum, on purpose, and also globally. Egyptians and Turks were tweeting tear gas advice. Journalists with national profiles started going live on TV. And yes, there were people from the left and the right who expressed outrage.

… I switched to non net-neutral Internet to see what was up. I mostly have a similar a composition of friends on Facebook as I do on Twitter.

No Ferguson on Facebook last night. I scrolled. Refreshed.

Okay, so one platform has a lot about an unfolding news event, the other doesn’t. Eventually, Facebook began to reflect some of what was happening elsewhere, and Ferguson information did begin to filter up. But so what? If you want real-time news, you use Twitter. If you want a more generalized and friendly experience, you use Facebook. Here’s the catch, according to Tufekci:

[W]hat if Ferguson had started to bubble, but there was no Twitter to catch on nationally? Would it ever make it through the algorithmic filtering on Facebook? Maybe, but with no transparency to the decisions, I cannot be sure.

Would Ferguson be buried in algorithmic censorship?

Without Twitter, we get no Ferguson. The mainstream outlets have only lately decided that Ferguson, a situation in which a militarized police force is laying nightly violent siege to a U.S. town of peaceful noncombatants, is worth their attention, and this is largely because the story has gotten passionate, relentless coverage by reporters and civilians alike on Twitter.

Remember, Tufekci and I both follow many of the same people on both platforms, and neither of us saw any news of Ferguson surface there until long after the story had already broken through to mainstream attention on Twitter. What about folks who don’t use Twitter? Or don’t have Facebook friends who pay attention? What if that overlap was so low that Ferguson remained a concern solely of Twitter users?

And now think about what would have happened if there was no Twitter. Or if Twitter adopted a Facebook algorithmic model, and imposed its own curation brain on content. Would we as a country be talking about the siege on Ferguson now? If so, might we be talking about it solely in terms of how these poor, wholesome cops were threatened by looting hoodlums, and never hear the voices of the real protesters, the real residents of Ferguson, whose homes were being fired into and children were being tear-gassed?

As I suggested on Twitter last night, “Maybe the rest of the country would pay attention if the protesters dumped ice buckets on their heads. Probably help with the tear gas.” Tufekci writes, “Algorithms have consequences.” I’ve been writing a lot about how platforms like Facebook and Twitter serve to define our personal identities. With the Facebook brain as a sole source, the people of Ferguson may have had none at all. With the Twitter firehose, we began to know them. 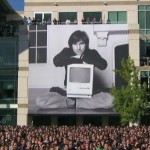 August 17, 2014
The Apple Ethos is Bigger Than Apple Itself
Next Post

August 19, 2014 As Ye Live, So Shall Ye Google
Recent Comments
0 | Leave a Comment
Browse Our Archives
Follow Us!