You’re As Distracted As You Want To Be: Smartphones and “Connectedness”

There’s a lot of hand-wringing that goes on over the idea that smartphones are making turning us all into heartless, distracted bastards. There’s no activity more popular on the Internet than finding things to feel morally superior about, so you get silly, haughty videos like this one or people shaking their heads in disgust at parents looking at their phone while at the playground with their kids. How awful. I’d never do that. Pfft.

We deal with it in our house, too. My wife hates it when she sees me staring at my phone when she and the kids are around, even for a moment, but then I turn around and get annoyed when there’s kid-crises going on and I catch her flicking through Facebook on her phone. We both need to just cut each other some slack.

Thing is, there’s just something about seeing a person gawking at a small rectangle in their hands that makes them look like a douche who’s checked out. I get it.

But obviously the range of things that one might be doing or looking at on a mobile device is enormous. Yes, that douchey-looking person might be absentmindedly browsing Upworthy posts, or they might be reading War and Peace on their Kindle app. They might be playing Angry Birds, or they might be making some art. There’s a lot that could be going on.

And, importantly, smartphone use does not necessarily mean someone has removed themselves from the real-world present.

There’s always some new research that exacerbates the worries people have about this kind of thing. By way of Melissa Dahl at New York Magazine, I came across this study on how the presense of a smartphone when two people are talking tends to reduce feelings of “interconnectedness” and “empathetic concern.”

This is not at all surprising. Of course it does. That is, it does if one or both of the participants allow it to. And actually, the effect is not a great as you might think by just reading the headline:

The difference in the quality of conversations in the presence versus absence of mobile devices was modest – average scores for connectedness and empathic concern were 5.05 and 5.51 (on a 7-point scale), respectively, with devices, versus 5.36 and 5.85 without devices. Also, what this study gains in realism by being a real-world observational study, it loses in experimental control. The causal role played by smart devices can’t be proven – perhaps less engaging conversational partners were more likely to reach for a smart phone or tablet.

That’s a pretty small effect. Less than even I, a smartphone partisan, would have suspected.

If you sit down to chat with a friend who has something important to talk about, and you decide to fiddle with your phone, it probably indicates more about your willingness to pay attention to your friend than it does about the Evil Plague of Zombie-Making Smartphones. You can decide to place your focus on your conversation partner solely, you can allow yourself to be utterly distracted by tweets and Facebook notifications, or you can be somewhere in between. Yes, it’s actually possible to be a good friend who listens, and give in once or twice to a glance at your screen. It’s really okay.

I wonder a lot, too, about whether there’s as much anxiety about people being too interested in their tablets or their laptops as opposed to their phones. Someone looking at their tablet, I suspect, looks more like they might be reading a book or perhaps even working, and so I think it appears less “distracted” to most folks. But that’s a guess. On the other hand, if someone is using a laptop, I would bet that it’s just assumed that this is person is working, or something like it, and so there’s no expectation that they be present. They’re acceptably busy.

Of course our phones are always with us, always on hand (at least mine is). Their omnipresense makes them more of a percieved threat to “connectedness,” whatever that means. Well, I may not be sufficiently “connecting” to someone in meatspace when I have my phone (and I do), but maybe that’s because I have a more sincere and meaningful connection to someone digitally, someone not anywhere near me, through my little rectangle. 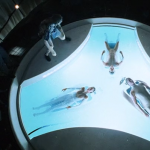 August 23, 2014 You Can Be Jailed for Internet Blasphemy Before You've Even Committed It in India
Recent Comments
0 | Leave a Comment
Browse Our Archives
Follow Us!