When I first became an Apple fan about a decade ago, it took an inordinate amount of effort for me to actually see one of their keynote events or product announcements. They were rarely livestreamed, for one (though few things were back in 2005 or so), and even when they were made available online, I had crummy Internet connections or spotty wifi, and the stream would often come in pixellated and jittery.

Even as the stream quality and accessibility improved over the Steve Jobs era, it never seemed like Apple much cared whether you watched. These are technically press events (or developer events in the case of WWDC keynotes), and while it was fine if the general public watched them, that wasn’t really the point. Whatever the actual thinking behind them, it always seemed to me that Apple just didn’t really care whether fans could see these things. If anything, that only made me want to see them more. As a true believer, I would seek out their wisdom.

As someone who found little to be enthusiastic about in any medium, the Apple keynotes were a kind of religious mass for me, where I and a diffuse and relatively small collection of enthusiasts would go out of their way to see what our Dear Leader, The Steve (peace be upon him), would bless us with, and what lessons he would have to teach. I didn’t (and don’t) care about sports events, I didn’t (and don’t) care about entertainment industry award shows. Everyone else did, it seemed to me, but Apple keynotes, they were my thing.

When I first began watching these (and I use this term specifically) religiously, Apple was unveiling things like Macs, computer operating systems, and iPods. Thanks to the popularity of the iPod, these events did grow more popular, but I suspect they still remained mainly the purview of the zealots like myself.

I suppose something changed with the introduction of the iPhone, and later the iPad. The masterful presentation of both those devices, along with their imminent ubiquity, made something shift in the public hunger for the Big Apple Show. I suppose that even to the nominal Apple fan, the thinking went, something like, “that Steve Jobs keeps showing us amazing things every time he steps on stage – I want to watch it happen!” And the charisma of Jobs, even when he was visibly ill, was undeniable.

But even as the audience for these events grew, it didn’t seem like the flock of Apple devotees was necessarily growing at the same clip as the raw consumers. Yes, people were terriby excited about new iPhones and iPads, no doubt. But whatever religious feeling Jobs and Jony Ive instilled in so many of us, our particular devotion wasn’t shared by the masses who were merely buying cool gadgets. Apple was now dominant in the industry, and its place in the culture was no longer one of a scrappy upstart that knew better, but still couldn’t break through to the unwashed masses. Now everybody, washed and unwashed, wanted iThings.

And as we saw with this latest event unveiling the iPhones 6 and 6 Plus and Apple Watch, Apple has completely changed its outward attitude to the events themselves. No longer posting them as a bone-throws or afterthoughts, they positioned this one as a first-order mass media event, akin to the Oscars or the Superbowl, complete with a homepage-dominating countdown clock. (The fact that the livestream was a technical disaster is beside this immediate point.)

Part of this, I think, is because Tim Cook will never be Steve Jobs. Neither will Tim Cook + Phil Schiller + Bono + insert-name-here. Steve can no longer draw us in, so if Apple wants to keep up the mystique of the must-see product unveiling, they will have to fan some of the flames themselves.

I don’t know how many people saw (or tried to see) this latest Apple event. But I think it’s a safe bet to say that the vast majority, while excited about the new products, were not “Cult of Apple” zealots. We don’t get the same kind of sermons we used to from Steve, instead we get beautifully made opening videos, or narrations of a design process from Jony Ive. That’s all fine. It’s not the same, but it’s good, it’s fun.

And I still try and squeeze some religious feeling out of these things, difficult as it can be. I want to be bowled over, I want to be convinced of Apple’s ethos as they present it. At least for those couple of hours.

But just as the twinge of ecstasy some folks feel after church wears off after returning to their regular lives, so too can an Apple zealot like myself step back and then think more critically. It is just about, gadgets, right? They’re just a big, rich company, right?

Kind of. But for a while it was my thing.

Related: Three friends of mine joined me for a one-off podcast discussion about the Apple event. Check it out here. 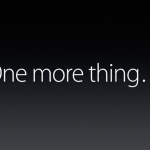 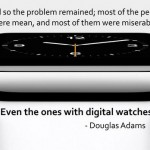 September 12, 2014 Will the Apple Watch Justify its Existence?
Recent Comments
0 | Leave a Comment
Browse Our Archives
get the latest from
Nonreligious
Sign up for our newsletter
POPULAR AT PATHEOS Nonreligious
1

Tim Keller Pushes the Myth of...
Roll to Disbelieve
Related posts from iMortal