The Martians’ Singularity: Thoughts on “The War of the Worlds”

The Martians’ Singularity: Thoughts on “The War of the Worlds” November 13, 2014 Paul Fidalgo 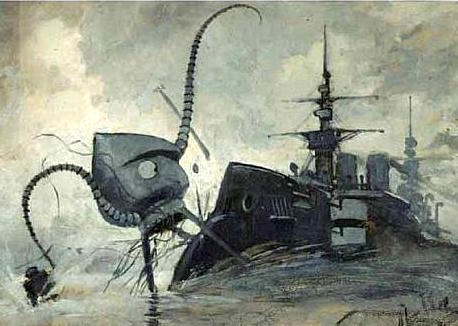 I’ve just read H.G. Wells’ original The War of the Worlds, and it was nothing like I expected. I have a completely unfounded prejudice about some of this classic sci-fi literature, wherein I presume it to be either vapid pulp or unnecessarily stuffy. (Frankenstein suffered a bit from the latter, I thought. Come on, Victor, get yourself together.) But just as I was delighted by my first reading of Jekyll and Hyde, I found War of the Worlds to be incredibly rich, suspenseful, and insightful.

Prophetic, even, as I suppose the best speculative fiction must often be. This blog’s fascination is with the intersection of technology and human life as it is lived, and in this book Wells gives us a glimpse of the future, where the Martians stand in for the marriage of human beings and machinery. Indeed, in a strange way Wells seems to be foreshadowing the Singularity, the moment that some believe is inevitable, when computing power becomes so great we fully merge with our machines, uploading our consciousness to the cloud for a kind of immortality.

Wells’ Martians were just about there. Of course, Wells had no concept of computers as we know them, but his Martians have an utter reliance on mechanization. It may be that they were physically adept on Mars itself, but on Earth the Martians, left to their own physical devices, were stultified by terrestrial gravity, and were almost totally dependent on their machines. But even if their bodies were better suited to Mars, Wells makes clear that their bodies had developed (“evolved” may not be quite correct since we don’t know whether natural selection was involved) to be physically limited to bare essentials: a powerful brain and nervous system along with grasping appendages, and almost nothing else. The machines handled the rest.

Wells’ narrator explains it this way:

[H]ere in the Martians we have beyond dispute the actual accomplishment of … a suppression of the animal side of the organism by the intelligence. To me it is quite credible that the Martians may be descended from beings not unlike ourselves, by a gradual development of brain and hands (the latter giving rise to the two bunches of delicate tentacles at last) at the expense of the rest of the body. Without the body the brain would, of course, become a mere selfish intelligence, without any of the emotional substratum of the human being.

So before we ever hear tales of heartless machines like HAL or emotion-starved androids like Data, here we have Wells giving us a near-perfect biological analogue: Intelligent creatures whose reliance on technology has allowed them, perhaps encouraged them, to jettison inefficient emotion. So really, the Martians are as close to the Singularity as anyone in the 19th century could have possibly invented.

What may be even more remarkable is how Wells refuses to cast the Martians as total villains. Yes, their aim is clearly to unfeelingly harvest Earth and humanity for their own consumption, but Wells ascribes no malice. The narrator, remember, has witnessed more of the horror of what the Martians are capable of than almost anyone alive, and yet he warns against judging them “too harshly,” because “we must remember what ruthless and utter destruction our own species has wrought” upon indigenous human cultures and animal species. “Are we such apostles of mercy as to complain if the Martians warred in the same spirit?”

What will the singularitarians and transhumanists think if our machines outpace us and, rather than bonding with us, decide to eradicate and harvest us just like Wells’ Martians? Will we be capable of making that kind of leap of perspective to understand our enemies?

There is a lesson, of course. The superior Martians, as ruthlessly efficient as they were, could not imagine that their undoing might come from beings too small to be seen by the naked eye, trusting in their superior firepower, and failing to fully grasp Earth’s biological nuance. What might we be neglecting as we bound toward the future during our own present technological revolution? What metaphorical (or literal) microbes are we overlooking?

But The War of the Worlds is not technophobic, for though it does present a powerful case for humility in the use of technology, it also admires it. The narrator makes several references to how humanity adopted much of the Martian technology all to its benefit after the invasion had failed. He speaks with esteem and awe of what the Martians had accomplished, and how they had developed genuinely meaningful efficiencies, not just in machinery, but in their own biology. For all the horror they brought, there is so much the Martians got right.

H.G. Wells may not have been a Ray Kurzweil of yesteryear, but I think he did at least intuit that humanity and technology were converging, even as far back as the 1800s. We may find that we achieve as a species much of what Wells’ invaders had, and may also be wise enough to avoid their fatal level of hubris. If Wells’ story proves prophetic, to paraphrase Carl Sagan, those Martians were us. 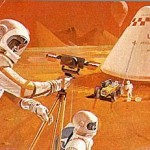 November 15, 2014 Mars One: Interplanetary Travel on Underpants Gnome Principles
Recent Comments
0 | Leave a Comment
Browse Our Archives
get the latest from
Nonreligious
Sign up for our newsletter
POPULAR AT PATHEOS Nonreligious
1