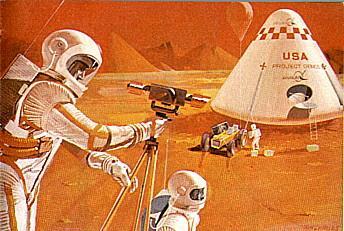 There are two new fascinating articles about the Mars One mission, in which a small number of people train for ten years to be sent on a one-way trip to Mars to begin the long process of colonization. Run by a private non-profit corporation, it plans to contract all of its technical needs from private industry (such as Lockheed Martin and SpaceX), and comb through its flood of applicants who want to be the first human beings to set foot on another planet and never come home. And I tell you, there could not be two more different articles on a single subject.

The first, by Daniel Engber at Popular Science, colors the project as a daring feat with a dash of underdog spunk. Mars One CEO Bas Lansdorp is profiled as a kind of unlikely visionary, the included photo of him is Steve-Jobs-scratching-his-beard in intensity. The applicants are wide-eyed dreamers, undeterred by the grueling existence of drudgery and isolation for which they’ve signed themselves up, fulfilling a monumental destiny for themselves and the species. Said one applicant to Engber, “It only seems weird to you because of when and where you live. I mean, would you ask an Inuit how he can stand the boredom of all the snow and rock?”

While the piece is not un-skeptical, I think the takeaway message is best summed up by CEO Lansdorp himself.

Whoa, right? Come on, guys. Even Elon Musk wants us to go to Mars! LET’S GO TO MARS.

But then one reads Elmo Keep’s more investigative piece at Matter, and the shine quickly fades.

The soul of the piece is Keep’s profile of one of the applicants, a brilliant polymath who despite his smarts and skills is utterly lost in his life, and who has glommed on to the Mars One mission with a near-religious fervor. Clearly, it’s less about the mission, and more to save himself. And Keep, through her investigation, finds that like all religions, the foundation is lacking in substance.

The first thing you might ask it, how are they going to pay for this mission? This:

A reality television series is the lynchpin of Mars One’s plan. It is through this that it intends to raise the necessary capital to actually fund the mission via advertising revenue and broadcast rights. … There is currently no network buyer for the show.

For the rights to advertise and screen this Survivor in space, Mars One estimates revenues of upwards of $8 billion, basing its estimates on the most recent Olympic Games cycle’s revenues. With this money, Mars One will then be able to purchase the spacefaring technologies that, in 10 years’ time, companies like SpaceX will have perfected, ready to send the Mars One astronauts on their journey.

So they’re presuming that a show that no one has green-lighted will make as much money as the Olympics, which will then allow them to buy technology that doesn’t yet exist. If this doesn’t sound sufficiently flimsy, it gets worse. SpaceX, Elon Musk’s company, which is touted as one of the providers of that technology, has signed no contracts with Mars One, and has no plans with them, but only tells Keep that they are “open” to relationships with “all interested parties.” So what is the technology they’re going to use?

The details of Mars One’s mission remain vague. … [Chief Technical Officer] Arno Wielders, who rebuffs requests for an interview, [replies] through the press office that he is too busy. Instead, I am directed to the website. On a page titled “The Technology,” it states very optimistically: “No new technology developments are required to establish a human settlement on Mars. Mars One has visited major aerospace companies around the world to discuss the requirements, budget, and timelines with their engineers and business developers. The current mission plan was composed on the basis of feedback received in these meetings.”

So to sum that up in Underpants Gnome terms:

We also learn that the 200,000 “applicants” is a dubious number that includes anyone who happened upon the website and began clicking through.

Look, you really have to read all of Keep’s piece, it’s excellent and deeply troubling, and you won’t be able to hear the words “Mars One” again without also thinking of something like Herbalife or Amway.

I am also a little heartbroken by this. Of course, I always held deep skepticism about Mars One’s ability to pull off its aims, but I didn’t doubt anyone’s sincerity, but all signs from Keep’s article indicate that it’s not being taken seriously by the corporation. If that’s not the case, then it sounds as though they are deeply incompetent.

So I can only imagine how those who are devoting their lives to this mission might feel upon learning what a house of cards the whole operation appears to be. (This is presuming Keep’s reporting accurately represents the state of the mission.) Regardless of what personal holes one is trying to fill by signing up, I assume the connection many of these people now feel to Mars, to the mission, to the corporation must be quite deep. Discovering that it is less than what it claims to be could be devastating.

I could never even consider volunteering for something like this, but I too am drawn by the romance of the idea. Though I’d never be directly involved, I feel a yearning from some place deep within for my species to making bold, daring moves to expand its reach across the depths of space. As Elon Musk has said, and I’ve noted on this blog, “I think we have a duty to maintain the light of consciousness, to make sure it continues into the future.”

Mars One, I fear, will not be maintaining the light. Perhaps the best thing that can be said of it, though, is that it has millions of people excited at the idea that someday we will. Maybe that’s enough.

November 13, 2014
The Martians' Singularity: Thoughts on "The War of the Worlds"
Next Post 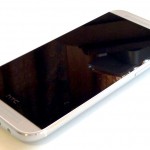 November 16, 2014 HTC One M8: Fast to be Dropped, Slow to Respond
Recent Comments
0 | Leave a Comment
"I know this is an old post....but I absolutely HATE my mac....much of it has ..."
annab Photo Management on the Mac Just ..."
"You sound like my son. I've loaned him a bunch of comics from the '60's ..."
Bob Jase Stuck Outside of the Comic Books ..."
"I always thought that Wells, otherwise a smart cookie, missed on the whole microbe thing ..."
Diamond Mike The Martians’ Singularity: Thoughts on “The ..."
"I feel your pain. I have always been an avid reader but a late entrant ..."
Mark in Ohio Stuck Outside of the Comic Books ..."
Browse Our Archives
Follow Us!