Whither the iPad? Oh, It’s Way Over There, Never Mind, I’ll Just Use My Phone.

Whither the iPad? Oh, It’s Way Over There, Never Mind, I’ll Just Use My Phone. January 2, 2015 Paul Fidalgo 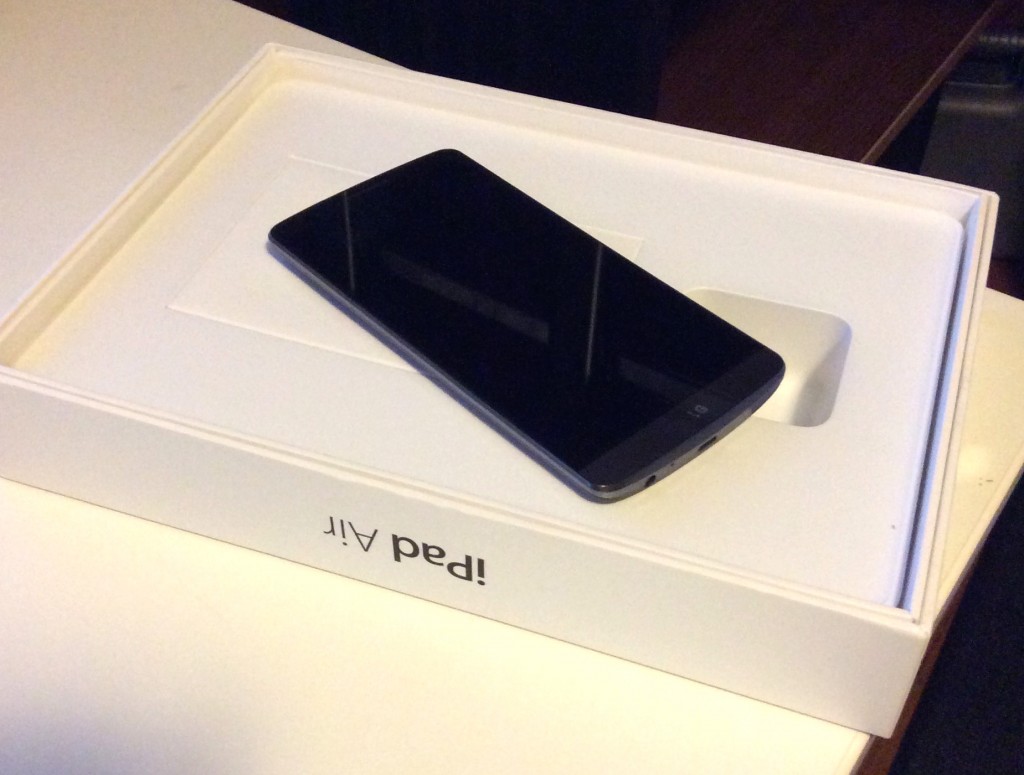 Would it be a big deal to be sans tablet? Despite my 2015 tech-setup pronouncement the other day, I’m stuck on the idea that my phone, a 5.5″ phablet, covers most of a tablet’s territory, and I really hate having objects that are both expensive and redundant. Admittedly, this is the first-est of all first-world problems, but it’s a genuine question for those of us working out what tech devices we’re going to invest our money in, and live our very full electronic lives through.

I’ve already gushed about my LG G3, how it’s the right balance of ergonomics and display size, and how I find it a genuine delight to use. The problem is that I prefer using it for most of what I’d use an iPad for, primarily reading (be it blogs, books, or tweets). There are a handful of games that are better experienced on a much bigger screen (Monument Valley comes to mind), and browsing a website is easier on a tablet, but not so much so that I find myself seeking out the iPad when the phone’s already in hand.

Often, when I consider busting out the iPad for my lean-back (or “choose-to”) activities, like reading books, browsing RSS, or playing a game, I think, Why bother? It’s all the way over there, and my phone is right here. Whee! I love this phone!

Conversely, when inspiration strikes and I want to get some writing done and blow the Internet’s mind with my incredible depth of thought*, the easiest thing to do is grab the iPad and start tup-tup-tupping on its screen. But then I run into all the usual pains-in-the-ass that come with word processing and publishing on a tablet, where text selection and editing is harder (and ironically easier on the G3, which has a built in clip-tray for easy access to your clipboard history), multi-tasking is burdensome, and formatting posts (whether in a Markdown editor, WordPress’s app, a third party blogging app, or in the WordPress web interface) is unreliable and frustrating. There is less net-frustration by just popping open my Mac. The iPad is great for on-the-go writing in some ways, with its small profile and great battery, but again, not so great that it’s not almost as easy to just bring the MacBook, and maybe a charger too if I know I’ll be working for more than a few hours.

Where the iPad truly excels over other devices is things like comic book reading, casual video watching (stand the thing up in its case and hit play), and drawing on apps like Paper. Well, I still don’t really read comic books much, if not never, so that’s not such a big thing. I don’t watch much casual video, either, and when I do, I probably already have the TV to myself (because the wife has gone to bed and Gilmore Girls is no longer playing), and can even cast much of what might be playing on my phone over to the TV via the Roku. And there’s always the MacBook.

There’s no real solution to the drawing thing, unless I move from Paper to, well, paper. That seems to work for my kids, but who am I kidding.

So it seems like a clear case, doesn’t it, when you lay it all out? Sell the iPad and spend that money on something more useful like food, heat, or rent. (Hahahahahahahahaha)

But then remember that since 2008 I had been an iOS-only guy, which means a significant amount of money has been invested in iOS software over the years. Having no iPad would mean having no iOS device at all, and all of those apps would be useless. All those $5 games! Those $10 artisanal productivity apps! I once bought a $10 Pinboard app, and I don’t even use Pinboard anymore, in large part because it wasn’t tablet-friendly enough!!!

Here we get into the whole sunk-cost fallacy (thanks, Matt), which I am particularly prone to falling for. I was one of the dummies who, in 2009, stood in line for a million years for the iPhone 3G when all of Apple’s systems crashed on launch day, and what would have been a couple of hours in the early morning turned into over 7 hours in the sweltering midday sun. But I’ve already been here for 3 hours, I can’t leave now! And it was for the iPhone 3G! The 3G! Not even one of the good ones!

Anyway, it’s not always clear to me that the sunk-cost fallacy is a fallacy at all. I mean, I did spend that money, I did invest that time and effort into familiarity and relative expertise with the system. And the iPad is not devoid of utility by any stretch of the imagination. I just need to give enough of a damn to use it.

But of course, needing to manufacture damn-giving is the exact opposite of my whole Theory of Tablets. They have be the device you want to use, that you choose to use even though you needn’t, in order to make sense. Otherwise, they’re just too-big phones or too-underpowered PCs.

It would be strange just on principle to not have a tablet, seeing as how zealously I’ve touted the iPad’s wonders in the past. And I can imagine myself with no trouble at all completely reversing myself within a day or so. I contain multitudes. Perhaps I’ll experiment with a tablet-free life, and simply put the iPad away for a couple of weeks, and see if I notice its absence. And of course, I would write about my experience here, because I know you really, really care.

Or, maybe I could buy a Chromebook.

January 2, 2015 Fear God or Fear the Police
Recent Comments
0 | Leave a Comment
"I know this is an old post....but I absolutely HATE my mac....much of it has ..."
annab Photo Management on the Mac Just ..."
"You sound like my son. I've loaned him a bunch of comics from the '60's ..."
Bob Jase Stuck Outside of the Comic Books ..."
"I always thought that Wells, otherwise a smart cookie, missed on the whole microbe thing ..."
Diamond Mike The Martians’ Singularity: Thoughts on “The ..."
"I feel your pain. I have always been an avid reader but a late entrant ..."
Mark in Ohio Stuck Outside of the Comic Books ..."
Browse Our Archives
get the latest from
Nonreligious
Sign up for our newsletter
POPULAR AT PATHEOS Nonreligious
1