Forget the Ones and Sixes, Show Me the Sevens and E’s

Forget the Ones and Sixes, Show Me the Sevens and E’s March 1, 2015 Paul Fidalgo

New flagship Android phones are being announced at the Mobile World Congress in Barcelona, right now. There’s the new HTC One M9, which is a nice evolution of the One line, which is fine (but apparently now playing catchup camera-wise after two generations of a noble and failed experiment with “ultrapixels”). The Samsung Galaxy S6 is also coming any moment, with an all- or mostly-metal build and one version with the “Edge” side screens. That’s a yawn for me.

Here’s what does interest me (and it’s two very different things). 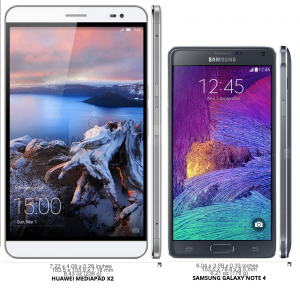 Huawei’s MediaPad X2: A high-quality, high-resolution mega-phablet/mini-tablet. A device with a 7-inch display and telephony functionality, the sheer size of which makes it debatable whether it’s a phone or a tablet. I’m comfortable calling it a phablet, which is a word I’ve embraced. Anyway, a giant-ass screen with lots of horsepower, a great display, and checking all the connectivity boxes, that’s a compelling product to me as a phablet convert. My current device is a Galaxy Note 4 (5.7 inches), which is great, but I still lust after larger-screened devices such as the Nexus 6 (5.9 inches, which just gets too hot for me to be comfortable with), the Xperia Z Ultra (6.4 inches), and Huawei’s own Ascend Mate 7 (6 inches).

The image on the right is my current phone next to the MediaPad, via GSM Arena. Swoon. Is a 7-inch phone even sane? I don’t know, but I’d like to try being that crazy.

Cheap, quality phones: Just before MWC, Motorola announced the Moto E (in about the most adorable way possible), which is a small-ish, good-looking, medium-resolution phone with more or less stock Android 5.0, and it starts at just $130 off-contract. That’s amazing. The Moto G, which is a very fine mid-range device, is only $180. Meanwhile, you have OnePlus’s current device, which is a full-fledged flagship powerhouse, starting at $300 off-contract. At MWC, I’m already seeing a lot of phones get introduced with good specs and low prices.

I subscribe very much to the idea that non-tech enthusiasts should not be using low-end tech, because low-end tech usually means more frustration and more additional work. That’s why Apple is usually so perfect for technophobes and normal humans, because their angle has always been to make the experience as frustration-free as possible (which is obviously at some risk of late). A couple of years ago, there was no way I could, in good conscience, recommend to anyone on a budget to buy a budget Android device. They were cheap-feeling, slow, and confusing.

No more. A relative of mine is ready to get a new phone, having used an iPhone 4S for years, and while she’ll likely go for the iPhone 6, I would have little qualms about recommending instead that she just grab a Moto G, get contract-free, and at the same time feel less anxious and precious about her device. Off-contract, iPhone 6 starts at $650, versus the G’s $180, which is about equal to AppleCare plus a deductible for a replacement if something happened to the iPhone 6. The Moto G as a phone costs as much as the insurance to replace a broken iPhone 6.

I like this trend. I like that people who aren’t as precious as I am about devices can now get a fully-capable, well-made device and not have to get stuck in a contract or shell out gobs of money. And that cheaper device is now actually pleasant to use, thanks to the advancement of the technologies involved, and to Android Lollipop.

March 6, 2015 Chromebook Caveats and Dealbreakers
Recent Comments
0 | Leave a Comment
Browse Our Archives
get the latest from
Nonreligious
Sign up for our newsletter
POPULAR AT PATHEOS Nonreligious
1