This we know to be true: I have something of an unhealthy enthusiasm for gadgets, currently focused on smartphones. (Sometimes it’s tablets, though not now, sometimes headphones, and it goes on.) When I find the one I like, it becomes a rather precious thing to me.

Remember when I was without a mobile device for a whole day a couple months ago? I didn’t do well.

A few days ago, a tripped while attending to a whining child at the breakfast table, at which point my Galaxy Note 4 flew from my hand, and though it was in a very good case, landed screen-first onto the rim of a cereal bowl. Though the bowl had some milk in it, there appeared to be no liquid damage (time may tell otherwise). But, alas, there was a chip in the glass of the screen.

My wife couldn’t even see it herself without help from me to point it out.

But I couldn’t bear it. The phone was very expensive, and I’d sold three other devices to afford it: my previous phone, an iPad and a Kindle. I’d only had it a few weeks. I kept it in a chunky Speck case to minimize any chance of accidental damage.

But I never liked screen protectors. I may be changing my position on them.

So there was that chip. That tiny, tiny chip. Not a scratch, mind you, not a thin line, but a small piece of the glass, now gone. A tiny, tiny piece that many would probably not even notice.

So I’ve sent the phone away to be repaired. (All the local repair places only do iPhones. All of them!)

Because I need some kind of phone for work and keeping in touch with my wife throughout the day, I was able to borrow an old, abandoned iPhone 4S from my wife’s uncle. The WiFi on it doesn’t work, but whatever. 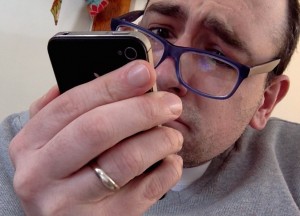 And it’s so small. When I had my own 4S back in 2011, I adored it. It was my favorite device ever. When the iPhone 5 came out, I thought it was a little too big.

Times have changed. The 4S now seems comically miniscule. It’s like a Fisher-Price phone. It’s small enough to be my Apple Watch that actually does useful things. And since the WiFi doesn’t work on it anyway, I’m using it as little as possible, only when necessary.

So without a tablet, without an e-reader, and without a phone I get any pleasure from using, I’m experiencing what I have to admit is a kind of withdrawal. I’m refreshing status update pages obsessively. I’m bemoaning my state on Twitter ad nauseam. I’m twitching.

How long will this take? According to FedEx, as of this writing, my phone hasn’t even yet arrived at its place of repair. Then days for it to be evaluated and fixed. That’s assuming they have the parts they need. It could be days for them to order and then recieve the parts. Then a couple more days to be shipped back.

All this for a tiny, tiny chip in the glass.

I’m told they once printed books on paper, bound into a kind of codex. I may explore that as a stop-gap.

I should say that my 5-year-old son, unbidden, and based solely on his perceiving my disquiet, offered me the use of his Fire HD 6 tablet “whenever you want.” He’s such an angel.

March 13, 2015 To Persist, to Ponder
Recent Comments
0 | Leave a Comment
Browse Our Archives
get the latest from
Nonreligious
Sign up for our newsletter
POPULAR AT PATHEOS Nonreligious
1