My Son and Papa Dreadnoughtus 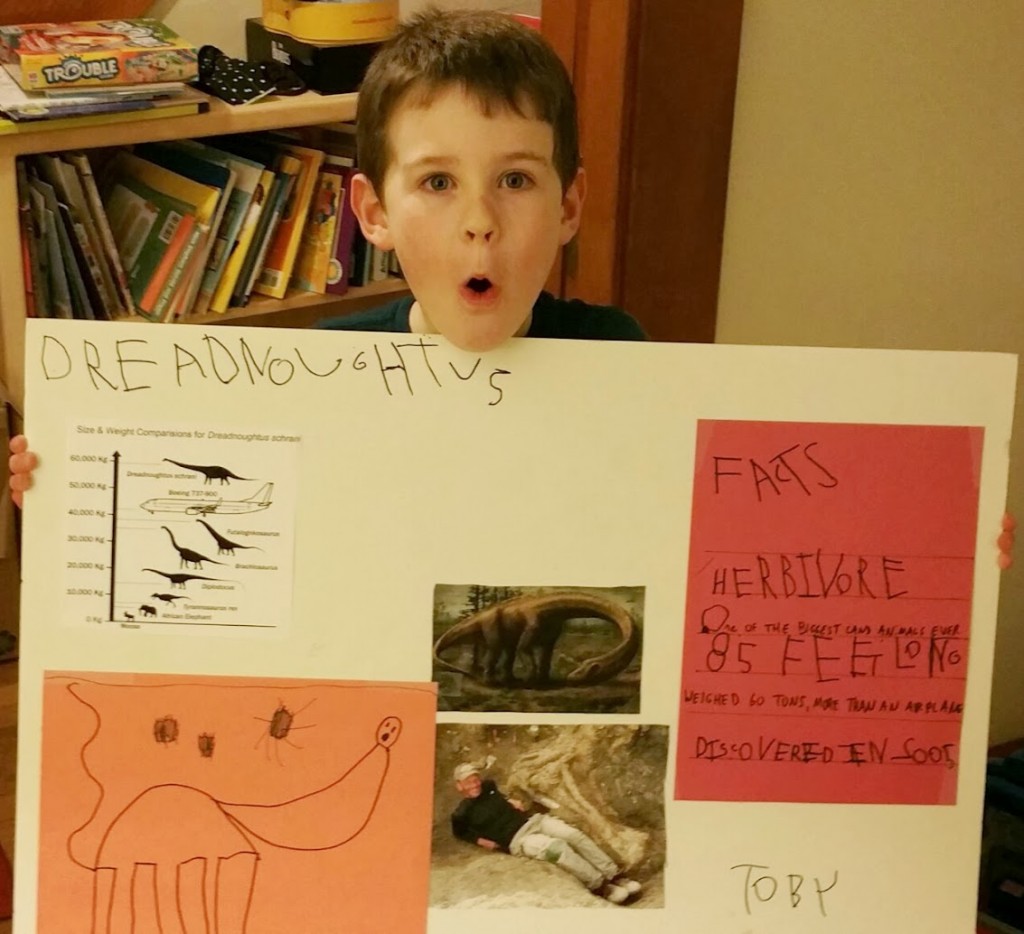 You may recall that last year they announced the discovery of a dinosaur species which they called Dreadnoughtus, thought to be the single largest land animal to ever live. Cool, right? Suck it, Argentinosaurus!

Anyway, my 5-year-old son has a project this week in his preschool class on dinosaurs, his favorite subject. He had to choose one to report on, and build a poster based on what he learned. Well he already knows gobs of facts about all manner of dinosaur species, so in order to up the ante and challenge him a bit, we chose, you guessed it, Dreadnoughtus.

He was really enthusiastic about it, he knew he’d be the only kid to choose it, and he threw himself into learning new facts about it, and especially drawing his masterful picture.

I snapped a picture of my wonderful boy and his project, and shared it to the inter-social-webs. And guess who responded to the tweet? None other than paleontologist Ken Lacovara, the paleontologist who discovered Dreadnoughtus! (He describes himself in his Twitter bio as “Papa to Dreadnoughtus.”) He’s the guy laying next to the fossil in the picture on my son’s poster above. He tweeted:

Nice! Please tell him I said he did a great job! 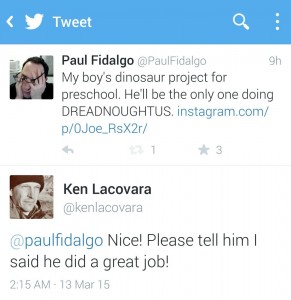 And on my contention that my boy would “kick those other kids’ [projects] butts,” Lacovara said:

I echo what my wife Jess said about this: It’s this kind of thing that’s so wonderful about the social Internet. That my preschool-age son could excitedly work on a project about a dinosaur, and almost instantly be encouraged and congratulated by the very person who discovered it.

March 15, 2015 Now I Wire Me Up to Sleep
Recent Comments
0 | Leave a Comment
"I know this is an old post....but I absolutely HATE my mac....much of it has ..."
annab Photo Management on the Mac Just ..."
"You sound like my son. I've loaned him a bunch of comics from the '60's ..."
Bob Jase Stuck Outside of the Comic Books ..."
"I always thought that Wells, otherwise a smart cookie, missed on the whole microbe thing ..."
Diamond Mike The Martians’ Singularity: Thoughts on “The ..."
"I feel your pain. I have always been an avid reader but a late entrant ..."
Mark in Ohio Stuck Outside of the Comic Books ..."
Browse Our Archives
get the latest from
Nonreligious
Sign up for our newsletter
POPULAR AT PATHEOS Nonreligious
1