As a Galaxy Note 4 owner, I aspire to make more use of the phone’s included stylus (the “S-Pen”). Samsung does a competent job of offering up ways to use it, be it for marking up images or taking quick notes, as well as some not-bad handwriting recognition. It’s a little convoluted (it is Samsung, after all) but it mostly works.

Today Google put out a new “keyboard,” which I place in quotes because it’s only a keyboard in that it’s a text input extension for Android that takes out keys and replaces them with a blank canvas on which one writes by hand, presumably with a stylus or finger. I’ve only been using it a little bit today, but I can already say that not only is its handwriting recognition by far the most accurate I’ve ever used, but it also offers up intelligent suggestions for auto-complete options, just as it does for the normal keyboard.

My stylus may finally have a reason to live. If you’re on Android, you should absolutely install Google Handwriting Input and at least play with it. It’s a trip. 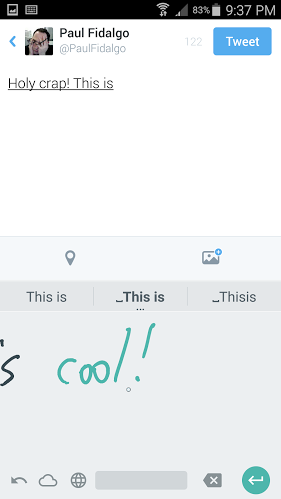 April 16, 2015 Nexus 6, You've Burned Me For the Last Time [Updated]
Recent Comments
0 | Leave a Comment
"I know this is an old post....but I absolutely HATE my mac....much of it has ..."
annab Photo Management on the Mac Just ..."
"You sound like my son. I've loaned him a bunch of comics from the '60's ..."
Bob Jase Stuck Outside of the Comic Books ..."
"I always thought that Wells, otherwise a smart cookie, missed on the whole microbe thing ..."
Diamond Mike The Martians’ Singularity: Thoughts on “The ..."
"I feel your pain. I have always been an avid reader but a late entrant ..."
Mark in Ohio Stuck Outside of the Comic Books ..."
Browse Our Archives
get the latest from
Nonreligious
Sign up for our newsletter
POPULAR AT PATHEOS Nonreligious
1

MLMs' Future: LuLaRoe and Its Pyramid...
Roll to Disbelieve
Related posts from iMortal