The Best Way to Buy and Sell Phones: Swappa

The Best Way to Buy and Sell Phones: Swappa May 8, 2015 Paul Fidalgo

Let’s say you want to sell your used phone. Most ads you hear on podcasts will tell you to use Gazelle, and that’s fine. But you won’t get as much money for your device as you would if you sold it yourself.

Let’s say you want to buy a used phone, either an older phone you can get for cheap or a newer device for less than something fresh from the manufacturer (or carrier store). You could go to eBay, but that’s very noisy and can be kind of shady.

You could go to Amazon, of course, for either of these things. I can’t, but you could.

But if you don’t want to go the route of Amazon or eBay or Gazelle, I think the best way to go is through a website I found called Swappa. 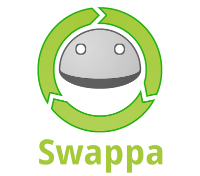 The idea behind Swappa is dead simple. People who want a device buy it directly from the person selling it. Swappa sets up a sales template for each item, asks for certain information about your device, and has you post pictures (along with an identifying code so a buyer can be sure the images are legitimate). The usual drill.

The cool thing is that there’s no worrying about what huge percentage a company like eBay or Amazon will take out of the sale. If you’re a buyer, you don’t have to worry about the markup. Swappa charges an extra $10 on top of every sale, and that’s it. The end. If the seller sets a price of $200 for their device, Swappa adds $10, and displays a price of $210 for the buyer. That’s it. Since these are usually fairly expensive items, Swappa presumes that sellers pay their own shipping, which of course can simply be factored into the price they’ve come up with.

And it’s remarkable what better deals you can get as a buyer, and how much simpler and fairer it is for sellers. I’ve bought and sold a number of devices on Swappa as I’ve gone through my great journey of phone-trials, and it’s been excellent every time. My only issue has been when a phone arrived with a single dead pixel, and I was able to come to a very fair agreement with the seller. Because you’re dealing with a single human being with no corporate barriers between you, you can make things work on a case-by-case basis.

It’s easy to find exactly what you want. You can browse by carrier or manufacturer of course, but you can also get very granular. If you are only interested in, say, a mint condition or better Moto X, unlocked, with a white back, a red front, and 64 gigabytes of storage, it’s easy to specify that with a few clicks. You can even subscribe to your wished-for item and get alerted every time a new one comes on the site. Yes, I have found browsing this site a little addictive.

(There’s another part of the site called the Boneyard, which I haven’t used, which is specifically for phones that might have some kind of problem, either straight-up broken or simply having a problem with the carrier. I can’t speak to it from experience.)

So how do you know you can trust these sellers? Swappa of course has its own rating system, where buyers rate sellers on the usual criteria. But you can also link your Swappa account to your eBay seller account so that a buyer can see how trustworthy you’ve been on eBay. In other words, you get to bring your online-seller resume with you to Swappa. PayPal, the only means of paying for things on Swappa, has built-in buyer protections, and Swappa support pounces to address any issues that might arise. It’s been great, and almost entirely worry-free.

Even if I weren’t banished from Amazon, I’d be using Swappa for all my used device transactions (and new ones, for that matter, for often brand new items are for sale). It’s simpler, it’s fairer, and it’s just a little more human.

May 9, 2015 Exiled from the Everything Store, Ctd.
Recent Comments
0 | Leave a Comment
Browse Our Archives
get the latest from
Nonreligious
Sign up for our newsletter
POPULAR AT PATHEOS Nonreligious
1

'Satanic' school head, pictured with a...
The Freethinker
Related posts from iMortal