Amazon Threw Out My Stuff: Exiled from the Everything Store, Part III

The saga of shame and betrayal that was my exile from Amazon took an uglier turn, as the company went from refusing to serve me as a customer, which they are well within their rights to do, to denying me my own property and even disposing of it.

You see, on top of being an avid Amazon buyer, I was also an active Amazon seller. I’ve been selling my used stuff on Amazon for as long as they allowed people to do so: CDs, books, cases, accessories, phones, laptops, everything. My rating was very high, and it was great for both me and Amazon. I got to make money on my old stuff, and they made money off of every transaction (more than they ought to, frankly — and here’s where you should be selling phones, by the way).

Amazon offers the use of its own fulfillment centers for third-party sellers like me. The seller sends their merchandise to Amazon, and then it can be sold as part of Amazon Prime, and customers can get their free shipping and quick turnaround. It costs the seller a little more, but it can be worth it for the raw convenience of sending everything to Amazon at once, and having them deal with getting it to customers.

At the time that Amazon closed my customer account, I had eight or nine items still in Amazon fulfillment. Nothing valuable; a book, a couple of cases, a charging dock, headphone pads, stuff like that, which probably added up to about $50 worth of stuff, or so I guessed.

In order to get one’s stuff back, one is supposed to log in, and fill out a request to have it shipped back to you. But Amazon had shut down my account, which meant I couldn’t log in and make such a request.

Eventually, I got an email from Amazon’s seller program saying that I needed to specifically request to have my stuff returned or they’d dispose of it. I sent many, many emails and replies to various Amazon emails (many of which were to no-reply addresses, but most were not) to make clear the problem: You shut down my account and barred me from logging in, and therefore, I can’t log in to make my request. Please just send me my stuff to my address (which I provided, severally).

I never got a response that made sense. It was always some form response telling me the same thing over and over again: We won’t re-open your account, and please log in and request your stuff before we destroy it. It was maddening.

Finally, I got someone on the phone in seller services, and took part in what was one of the most absurd conversations I’ve ever had. (This agent was perfectly nice and even sympathetic, I should say.)

First, she couldn’t even find my account’s merchandise listed anywhere because my account had been closed, which shut it off from her view. I expressed how insane it was that Amazon was going to destroy my property without giving me any recourse to retrieve it first. It was a kind of theft, I felt. The agent said that somewhere in the finest of print were clauses about Amazon having the right to dispose of inventory if an account is closed or something, though she agreed that this was nuts and no one could be expected to know that.

Then she successfully tracked my missing inventory through the case numbers in the (many) emails, and listed off what there had been, which she said would have added up to about $35 in sales if all had been sold. I suggested that Amazon could at least compensate me for the items they were getting rid of without my permission. Then she rattled off all the seller fees that Amazon charges, including some I’d never heard of, and said at the end I’d be theoretically “owed” about $8. But, she told me, to even go through the process of transferring any money to me, it would cost Amazon about $10. The long and the short of it was that Amazon was getting rid of my stuff and there was absolutely nothing to be done about it.

She even suggested that under some ways of tallying it all up, I might owe Amazon 40 cents. “How will you be paying for that today?” she joked. Ha ha.

I believe personally that Amazon didn’t give me enough of a chance when they closed my customer account, though I also maintain that they had every right to do so. I am not entitled to do business with them, and they are not obliged to do business with me if they don’t think I’m a good customer. But it’s something else entirely for me to have entrusted my own property to them, and for them to block me from accessing it and then destroying it – particularly when my record as a seller was exemplary.

It wasn’t much stuff, of course. Odds and ends that are of no real value to me beyond what I could sell them for, so I’m not “harmed” by this. But I do think Amazon is behaving abysmally in this situation, because it’s simply not their stuff to do with as they please, it’s mine.

After my call with the agent, I was sent yet another email, one asking me to rate the conversation, and indicate whether they had “solved my problem.”

I clicked “No.” What do you think I got?

So shall it ever be. 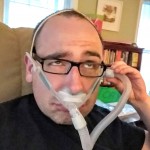 June 4, 2015 You're CPAPping it Wrong
Browse Our Archives
Follow Us!

The apple doesn’t fall far from the tree
My grandson Jerome, who graduates from the University of Rochester in May,...
view all Nonreligious blogs
Copyright 2008-2020, Patheos. All rights reserved.