I’m a sucker. I used to think that there was some modicum of integrity within Chris Christie. Yes, his brand was based on bluster and boorishness, and yes, he played the game of politics and sacrificed principles when necessary. But I always presumed that there was something honest underneath it all, something true, a genuine desire to do right by people, even if I utterly disagreed with his priorities or positions.

Remember how he defended his appointment of a Muslim judge, when his fellow Republicans attacked him? Remember his moving story of a friend’s struggle with addiction? Remember his heartfelt praise of President Obama during Hurricane Sandy? They bespoke, to me, a man who, despite the bombast and machinations, had some ethical foundation, some kind of true heart.

No. He’s revealed himself as a complete phoney, a liar, probably a severe sociopath. Anyone who can speak the words he spoke today about Donald Trump cannot be trusted, cannot be believed, and cannot possibly have anyone’s best interests in mind other than his own. He praised Donald Trump today with the same sincerity and gravity that he displayed in his previous flashes of humanity. But there’s no way he believed a word of what he said today.

I have to assume, then, that everything else he’s ever said was equally full of shit. Anyone who can ape sincerity that convincingly is dangerous and possibly sick.

I’ve been naive. I’ll never believe him again. No one should. Not even Donald Trump. 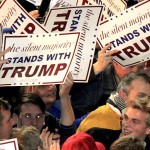 February 25, 2016
Trump Can't Be Stopped by Shaming His Voters
Next Post

February 28, 2016 Ben Carson Makes a Correct Diagnosis
Recent Comments
0 | Leave a Comment
"I know this is an old post....but I absolutely HATE my mac....much of it has ..."
annab Photo Management on the Mac Just ..."
"You sound like my son. I've loaned him a bunch of comics from the '60's ..."
Bob Jase Stuck Outside of the Comic Books ..."
"I always thought that Wells, otherwise a smart cookie, missed on the whole microbe thing ..."
Diamond Mike The Martians’ Singularity: Thoughts on “The ..."
"I feel your pain. I have always been an avid reader but a late entrant ..."
Mark in Ohio Stuck Outside of the Comic Books ..."
Browse Our Archives
get the latest from
Nonreligious
Sign up for our newsletter
POPULAR AT PATHEOS Nonreligious
1