Presidential Primaries Might Be a Terrible Idea March 14, 2016 Paul Fidalgo 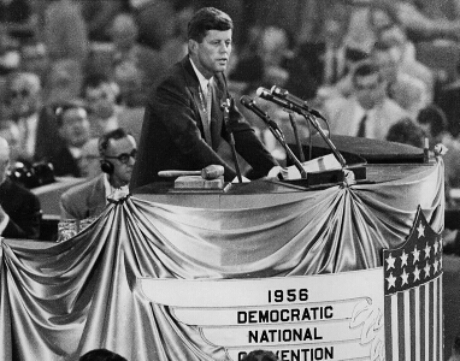 Political parties aren’t the government, even though the Democrats and Republicans have so entirely weaved their parties into the machinery of government and the electoral system. Constitutionally, the two major parties are no more “official” than the Natural Law Party or the Rent is Too Damn High Party. They are nongovernmental associations that organize to field candidates for public office around the shared positions and values of whatever coalition of interests they can cobble together.

As such, they can choose the candidates they’ll run for office any way they like. Right now, the two major parties base these decisions largely on constituents’ votes in primary elections and caucuses, run through a very porous filter of delegate allocation. But if they chose, they could have party bosses choose candidates in smoke-filled rooms. They could even draw straws to see who would run for what, or have prospective candidates engage in medieval combat. It’s up to them.

The primary system we have now is relatively new, and on its face, the idea that the constituents of a party would choose a presidential candidate by (more or less) a popular vote seems like a good idea. It feels, if nothing else, fair. This is a democracy, and so we’ll pick our candidates democratically.

We take this for granted as the wisest and most morally correct method. We can see this whenever the prospect of something that might contradict the popular verdict arises, like superdelegates in the Democratic Party, the specter of a brokered convention, or when the particular rules of a given primary or caucus seem less than straightforward. People’s hackles are raised, and there is much crowing about the right to vote and the subverting of democracy.

But of course, we do not have a constitutional right to vote for party nominees. (Indeed, we don’t even have a constitutional right to vote at all, but that’s another discussion.) Candidacies aren’t political offices. It may be cynical or underhanded for a party to subvert the will of its primary voters, but it’s not against the law or a violation of representative democracy.

In case you can’t tell, I’m no longer convinced that primaries are the best way to choose candidates for office. Even just confining the discussion to the presidency, it no longer seems self-evident, as it once did, that the two major political parties are doing anybody any favors (themselves or the American people) with the primary system as it is. I also don’t know if the alternatives are any better.

I used to work for the electoral reform organization FairVote, and wrote many thousands of words about ways in which the primary system could be improved, but those improvements always focused on increasing the democratic fairness of the primary system, including holding either a single National Primary Day or having a rotating calendar of primary elections, all to reduce the outsized influence of New Hampshire, Iowa, and South Carolina on the process. As I write today, though, I’m not sure we should be having these elections at all.

Obviously, it’s this year’s election that’s making me lose faith in the system. The clearest example of primaries-as-shitshow is the GOP race, where an angry, violent, and happily ignorant band of racists is about to lift Donald Trump to the nomination. There is no way this is a good result, not for the Republicans, and not for the country as a whole, which will be subject to his idiocy and thuggery, and have to go through the motions of treating his candidacy with a show of seriousness. It’s abysmal. And if someone like Cruz were the other “popular” alternative among the GOP primary electorate, that’s no better. He’s a maniac, and such a maniac that even his own lunatic colleagues loathe him.

It’s not the same with the Democratic Party, but it’s still bad. Not because Bernie Sanders, if nominated, would be somehow be a disaster (though he would be far more likely to lose in my opinion). He’d be fine and perfectly respectable, and I’d be proud to vote for him, though I am a supporter of Hillary Clinton’s. But the fact that the choice of the Democratic Party’s nominee is being left largely up to Democratic voters, the supporters of the two candidates are incentivized to vilify the candidate they don’t support. If there were no primary contest being held, Bernie people and Hillary people would overlap, and everyone would be cool with each other, working together toward common goals, even if not all of those goals are shared in precisely equal measure. But since we’re subjecting them to a popular election, we have Bernie supporters trying to convince the world that Hillary Clinton, the likely nominee, is evil incarnate, a lying, heartless monster who must be destroyed, which of course damages her chances for the general election and overall poisons political discourse among the constituents of the only party that is, right now, serious about governing.

So imagine a scenario in which a presidential nominee is chosen by existing officeholders within a political party, and that’s it. All the party’s governors, Members of Congress, and heck, even the state legislators and mayors and whatnot, all get together, in person or virtually, and argue and debate until they hold a vote, and then pick their party nominees. It has at least the whiff of representative democracy in that all the stakeholders will have been themselves elected, but it avoids the mob-driven death march of the primary campaign.

Or maybe we still have primary elections, but as they have at times been, they are straw polls, beauty pageants, displays of strength and potential support among the grassroots. And after the entirely non-binding straw poll votes are held, the aforementioned party officials take that into account when making their decision.

Or maybe there’s something else that makes more sense. Maybe a board of directors of a party should just hash it out in a room, with or without the smoke. Maybe a randomly chosen “papal conclave” of party stakeholders should figure it out and draft a candidate. I don’t know.

But what I do know is that we have a problem with primary elections. They’re producing bad results, either in the candidates they annoint or the damage they do to a party. I can’t say I’m now wholly opposed to them in principle, but I can say that perhaps it’s time to at least consider that we should save all the democracy for Election Day itself.

March 26, 2016 RT This Post for Dopamine Squirts
Recent Comments
0 | Leave a Comment
Browse Our Archives
get the latest from
Nonreligious
Sign up for our newsletter
POPULAR AT PATHEOS Nonreligious
1