Church of Satan Comments on The Satanic Temple’s Missouri Lawsuits

On Monday, Church of Satan (CoS) published a blog post to their news feed and a corresponding fact sheet regarding The Satanic Temple (TST) and their Missouri abortion law challenges. In the post ‘Reverend’ Joel Ethan proceeded to explain CoS’s presumably official position. Not that anyone asked. The post says ‘journalists’ asked, though they are unnamed and apparently were not informed that CoS planned to answer. We’re rather late in the news cycle for the press to not have jumped on the story had they any interest in doing so. An eager journalist is not one to sit on such announcements in the age where their paychecks are based on clicks and shares.

So I’m going to say absent journalists deciding to cover this release that maybe (?) no one really asked. Which is weird because the first of their 11 rules of the earth is “Do not give opinions or advice unless you are asked.” So, we’re already flirting with hypocrisy before we even get into the content. (But I’m still open to the idea that they just don’t think I’m worth answering. We’ll give them the benefit of the doubt on that part.)

So what do they think?

Their actual opinion seems to be that the CoS believes that doctors and scientists are better than priests when it comes to making government policy on medical procedures. They and I agree on that. So I presume we also agree women do have the right to abortion. Rev. Ethan doesn’t say as much, but as that is the overwhelming opinion of medical practitioners in the field I assume he’d at least acquiesce the point. He goes on to say that if laws based on a particular religious opinion are enacted (like Missouri’s informed consent materials) that those laws should be challenged and struck down as a violation of church/state separation. We agree there also.

They are not, however, happy that The Satanic Temple are the ones mounting the challenge for a few reasons. It is their contention that TST’s approach to challenging these laws is “muddying the waters with arguments based on competing religious points of view” and favors pluralism instead of upholding secularism.

I find this line of reasoning confusing because the entire point of secular government is to not make laws that interfere with the religious beliefs of those it governs. Secularism is just the principle on which we agree that a religiously pluralist society will least infringe on the liberties of its people. The methods through which religiously inspired laws are challenged should be secondary to the result. In Missouri’s case, the law being challenged regards a religious opinion on at what point does a zygote or fetus become a unique entity conferred with the rights and privileges of a person. This is a matter of conscience on which secular thought takes no stance. However, under RFRA as long as there are competing religious opinions then secularism must be preserved. So a religious challenge is a real and viable path to upholding secular law.

The other reason they don’t like what TST is doing is that they just plain don’t like TST. They accuse TST of appropriating Satanism because its opinions don’t reflect CoS’s philosophy, though they admit it does borrow from it. Rev. Ethan uses the phrase “lift ideas from our extensive literature”, but that’s just the sort of appeal to authority thing they always do when proclaiming themselves The One True Satanists™ (Patent Pending). This has become tiresome tactic of theirs over the course of TST’s growth. But here again, they violate their own stated precepts in the process. They have long said that one need not be a card carrying CoS member to call yourself a Satanist, and their own FAQ is rather emphatic on the point:

“Satanism is a work in progress, an attempt for melding science with philosophy, we are fully justified in choosing the concepts of old, working with them in our context and taking them into the future. (If we didn’t, who else would?) This is the same process used by scientists, doctors, psychologists, and many other professionals. Nothing would get done if individuals merely went along with established thought and never added to it.”

That being the case, I feel we can dispense with Rev. Ethan’s accusations of TST being satirical in nature and his questioning of their adherents’ sincerity in commitment to their 7 Tenets. I don’t particularly have much of an opinion on his historical timeline, my own research into TST’s founding roughly comports time wise (though as noted yesterday in Lucien Greaves’ rebuttal there are many inaccuracies), but I think they severely under-estimate what the organization has become. As for their more general complaint about members of TST calling themselves Satanists all that can really be said is their own literature demonstrates they lay no exclusive claim to the label and that its meaning continues to evolve. So, if they are unhappy with TST taking a different approach to the Satanic milieu to evolve Satanism into the future one would think they might recall their own advice: “Do not complain about anything to which you need not subject yourself”. 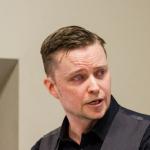 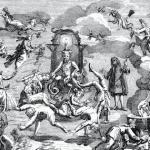