In what may be one of the most hypocritical arguments I’ve heard in a long time three groups (Missouri Right to Life, Thomas More Society, and The Association of Pro-Life Obstetricians and Gynecologists) filed an amicus brief in The Satanic Temple’s case opposing Missouri abortion law.

In the brief, these groups accuse Mary Doe and TST of “blurring the distinction between fact and belief”. It then goes on to make all the arguments you’ve likely heard before for “life begins at conception”.

Obviously, I’m not going to rehash the whole brief or try and make a case for TST’s legal strategy here. This is still just a blog; I’m still just writing for myself; and those kinds of technical details are best left to the lawyers and experts. But I would like to point out one interesting thing about the way the brief lays out its argument.

The groups seem to rely heavily on a misapplication of embryonic, stem-cell, and in vitro fertilization (IVF) research. The irony here is that such research, and IVF itself, all hinge on the creation and destruction of early stage embryos. For example, say a friend of mine and their spouse are trying to conceive through IVF. The doctors ended up with five fertilized eggs, two of which are deemed less viable and disposed of and three are implanted. They think that’s murder. Or, for an example from the brief:

“Since the time of Roe v. Wade in 1973, scientific knowledge of embryonic development has made great strides, in part because in vitro fertilization procedures have enabled scientists to observe and document the earliest moments of embryonic development. For example, Stanford researchers have recorded and analyzed the early development of 100 early human embryos using time-lapse video microscopy.”

If you believe, as the authors of the brief do, that each one of those embryos was a individual worthy of legal protections then that study would be reprehensibly immoral. Yet, they are more than happy to cherry-pick data from research which they think supports their beliefs, even though those same beliefs condemn the research itself.

Life is Not That Simple

The assertion of these ‘life begins at conception’ folk is the idea that since an embryo or zygote has unique DNA that it constitutes a distinct human life. But contrary to their assertions that really is a philosophical claim and matter of belief. That’s because in order for it to make any sense you have to also believe in a soul, and that the soul enters the fetus at the moment of conception.

I and many others don’t believe those things; they can’t prove those things; and the idea that a collection of living cells with human DNA constitutes a human life doesn’t make sense. Let me put it this way: on the other side of this equation is death.

We determine death by the cessation of brain function. If we waited for every cell of a person’s body to die before declaring them dead it could take days. That individual cells continue to do their thing beyond clinical death has nothing to do with how we determine if someone is … well … still a someone. So in my opinion, if death is the same thing as non-life (which I believe to be the case), and the determining factor for human life is brain function irrespective of cellular activity, then yeah I absolutely don’t believe life begins at conception. That too is a philosophical position, which is the point. It’s not the purpose of the judicial system to determine whose belief is more valid, and it’s invasive for the state to endorse one position over the other.

I’m unaware of a court date having been set for this case yet. But in our current political environment it’s going to be hotly contested and groundbreaking. For further information check our previous coverage.

The Satanic Temple has filed a motion in response requesting the court deny the filing of TMS’ brief stating:

“The Brief adds nothing of substance to the issues before the Court. Doe does not claim the Informed Consent Laws require her consideration of inaccurate information about her fetus. Rather she claims the Informed Consent Laws place an improper burden on her religious belief that her fetal tissue is part of her body and can be removed without any consideration of its current or future condition.”

The court had previously ordered that no other briefs be filed in the case. TMS was seeking special leave to file their brief with the court. If TST’s motion is accepted TMS’ brief won’t be taken into account in the case. In a post to his patreon followers Lucien Greaves additionally illustrated the irony of TMS asserting any ‘evidence’ for their claims since they argued the exact opposite thing in a brief they submitted during Hobby Lobby. In effect, they themselves helped render their own argument here meaningless years ago by aiding a decision that gives religious beliefs special favor under the law. 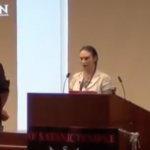 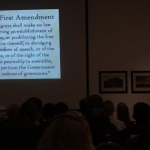 November 21, 2017 Lucien Greaves at The Humanist Society of Greater Phoenix 11/20/2017
Recent Comments
1 Comment | Leave a Comment
"i remember the '80s satanic panic; a couple of british bands at the time [particularly ..."
Griff Pryce Guest Post: A Satanist Explains Why ..."
"Musta had some Lizard People working behind the scenes..."
Cozmo the Magician Faced With Losing Accreditation For Conspiracy ..."
"How were they even accredited in the first place?"
WMDKitty -- Survivor Faced With Losing Accreditation For Conspiracy ..."
"Holy smoke. The madness continues. What will it take to exclude these lunatics from real ..."
Jim Jones Faced With Losing Accreditation For Conspiracy ..."
Browse Our Archives
get the latest from
For Infernal Use Only
Sign up for our newsletter
POPULAR AT PATHEOS Nonreligious
1