Taking Back Winter Traditions with Satan

My boss Dale emailed me last week and said “what would you think about some posts on Satanism basics — the history, the purpose, misconceptions, key figures, etc?”

I was two days away from flying up to Denver for The Satanic Temple – Colorado’s Saturnalia pageant to benefit Atheists Helping the Homeless.

Satanism’s roots, in my mind, date back to the late Renaissance. It didn’t have a name then but it’s when writers and artists of the day started to see Satan as a heroic literary figure. That shouldn’t really be a surprise to anyone. As people abandoned the middle ages monarchy fell out of fashion, institutional power within the church was questioned, scientific inquiry made dramatic advancements, and the idea of a character that challenged not just the church but god itself became quite appealing to some.

I think anyone who has ever looked into it to try and wrap their brain around Satanism understands this narrative of Satan as the hero. What they don’t understand is how, after a couple of hundred years, that translates to a warehouse party in Denver to help the homeless. I think the confusion comes from this notion that Satanists are a rather libertine bunch; so the idea of Satanists doing humanitarian work seems incongruent.

Now to be fair, we are a rather libertine bunch, and that tradition can be traced back to the early Romantics. William Blake was one of the first to voice the idea of thinking of Satan as the hero in light of Milton’s Paradise Lost and Blake almost accidentally started the free-love movement a couple centuries early. What people aren’t getting is the charity part, but I think it’s pretty simple. We do what makes us feel good, and helping people out makes us feel good.

It really is that simple. We don’t need to do a deep dive into the nature of altruism and whether or not truly selfless actions are possible to explain it, seems like a lot of people feel we should though.

Much like back in October, this month had several chapters decide to do events, Dallas and Austin even branded theirs the same, calling it Sol Invictus. Colorado was opting for playing around with themes and traditions by dedicating an event to “taking back” the pagan symbols of Christmas (the trees, the pageantry, the merriment … particularly the merriment). This is a common enough theme in Atheist circles. Even Adam Ruins Everything has covered the topic so it’s pretty well trod ground, but it was a good theme for a charity event that features pole dancers and a Baphomet shot luge.

I think the aesthetic is a part that trips people up too. Since a lot of Satanists tend towards a darker, gothic-esque sense of fashion there’s a bit of ‘judging a book by its cover’ that people outside of the community misinterpret as signaling fatalistic attitudes. When people see a pack of black-clad misanthropes their minds immediately jump to the Nihilists in The Big Lebowski. This misunderstanding is easier to explain. It comes more from the LeVeyan era of Satanism which was hallmarked by a more objectivist-style mindset in which everyone is pretty much out for themselves but never says much about the nuances of how community improvement can have selfish motivations especially if it’s your community.

Anyway back to the Saturnalia

Cross-pollination between groups has become something of a trope within Satanic Temple chapters. So I and my two cohorts from TST-Arizona heading up to lend a hand with the event wasn’t unprecedented. What’s interesting about it is that it provides kind of miniature cultural exchanges as each individual chapter develops its own personality. TST-Colorado seems to be carving out kind of an artsy niche for itself. I like that because it does hearken back to the literary and artistic underpinnings of what Satanism is without losing sight of the organization’s larger goals.

For the event TST-Colorado staged a play that was their own take on a nativity. The story was made from whole cloth and unrepentantly poked fun at the nativity plays we all (or at least most) had to sit through or be in as kids. It was about Satan coming to earth on Saturnalia to give gifts of knowledge, justice, and liberty to mankind. One might have called it quaint if it wasn’t for the stripping and revelry at the end. I was reminded of a student documentary that TST-AZ’s Chapter Head Michelle Shortt and Spokesperson Stu De Haan participated in which we got to see two weeks before in which Stu said “We may look different, not even that different, we’ve got tattoos. We wear black. It’s not dramatic.”

The Reason for the Season

What you’re really seeing in the growth of organizations like The Satanic Temple are a group of people who have always drifted towards counter culture and individualism realizing that you can, in fact, form a cohesive group around that. There’s an appeal in the character of Satan for these people because he’s a metaphorical rebel and outcast. A lot of people in TST commiserate on those sentiments. This is where many detractors would say groups like TST are trying to destroy xmas. That isn’t really the case though, these people still want to celebrate the spirit of the season; they just want to do so in their own way. They always have wanted to, but they never felt comfortable to express what it means to them in their old church, or school, or even with their own families.

After some scheduling hang ups and set changes that anyone who has ever planned an event can sympathize with, Chapter Head Ilia Kossilov took the stage to talk about the chapter’s initiatives and thank everyone, followed by a public service announcement video which you don’t get to see because ‘community standards’ around here dictate that I’d probably be violating a part of my contract if I embedded it.

The night’s ritual, such as it was, was also more of a play than a ritual in which Colorado members staged a conversation between Satan (played by Media Liaison Ada King) and Saturn (played by another ally who I won’t name because I’m not sure how they’d feel about that) in which Satan symbolically gave the trappings and festivities of the season back, having stolen them from a preachy ‘there is so a War on Xmas’ type character portrayed by one of Arizona’s own, Lesser Key Clothing’s Wonka. (If you’re an avid listener of my podcast you’ve heard him before as a guest host.) There’s a catharsis in this kind of symbolism. A rallying cry of ‘we will not be defined by you’.

To someone outside of all this from a different religion I understand why someone might think that Satanists were using the event to make a mockery of their traditions, but that’s really not the case. The way I see it their traditions like togetherness and friendship are our traditions too. We’re just reshaping them to make them our own. Sure it’s expected that some people will be offended. No offense is meant, but also you weren’t invited so if you are offended that’s on you. 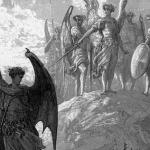 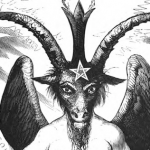 Josephus, and the Lies Christians Tell...
Roll to Disbelieve
Related posts from For Infernal Use Only