“Today, 23 February 2018 The Satanic Temple (TST) has filed a lawsuit against the City of Scottsdale, Arizona alleging religious discrimination following the city’s refusal to allow TST to participate in a policy that claims to allow any religious denomination to deliver invocations prior to public City Council meetings. Public records obtained by The Satanic Temple reveal that in eight years’ time, every invocation given before the Scottsdale Council was of Judeo-Christian faiths. Public records of the council members’ emails further reveal a flagrant bias against TST that was held by council members, with one Councilwoman, Kathy Littlefield, openly stating that she did “NOT want the Satanists” to speak, and that the notion that a member of TST had the right to do so was an example of “taking equality too far.” – The Satanic Temple Press Release, 23 February 2018

Do you remember The Satanic Temple’s Invocation Campaign? It’s back.

When We Last Left Our Heroes …

About two years ago Chapter Head of TST-Arizona Michelle Shortt asked Phoenix City Council to let them give an invocation to begin the proceedings, as was their right. The local population did not like that at all and the resulting public contents were a several hours long ordeal which eventually resulted in the Phoenix City Council voted to do away with invocations (you don’t have to watch the whole thing, but feel free to skip around):

What was somewhat less reported on, mainly because the request to speak in Phoenix was such a fiasco, was that TST-AZ also requested to give an invocation in Scottsdale, AZ. That request, while initially approved, was turned down on what TST believes is more duplicitous grounds, a move championed by every two-bit preacher in town all the way up to the editorial board of the local paper.

What is a Substantial Connection?

When Scottsdale rescinded their invitation to The Satanic Temple they claimed that they were following a “longstanding practice of having the invocation given only by representatives from institutions that have a substantial connection to the Scottsdale community”. Which is a cute bit of rhetorical gymnastics, but the TST suit alleges there was no such standard so much as mentioned in the request process. This ‘longstanding practice’ doesn’t seem to be anything more than an ex post facto attempt to justify discriminating against Satanists.

More to the point are the very public statements made by Scottsdale’s Mayor Jim Lane, who actively campaigned for reelection as the mayor who “Stopped so-called ‘Satanists’ from mocking City Hall traditions with a ‘Prayer’.” Which to me basically says ‘we did what we did specifically to exclude one particular group’. It was a popular move; but as we all know popular and right are different things.

Since then the good people at Muckrock (a non-profit government transparency organization). filed a Freedom of Information Act request for all of the city’s emails regarding The Satanic Temple. TST’s legal team sorted through thousands of those emails looking for additional documentation to support their claim that Scottsdale’s excuse was just that, a contrived excuse and not some codified longstanding practice as Mayor Lane claimed in his statements to the press.

One thing I find interesting is that the complaint says that the city may have tried to block a lawful attempt to reschedule. This revelation comes from an email to the City Council from the city’s Management Assistant in which she says they “reached out to everyone on our list of faith leaders to try and book as many dates as possible”. So apparently Scottsdale (1) keeps a list of faith leaders they approve of and don’t tell anyone how that list is compiled or how to get on it. More importantly, if this email is accurate, then (2) city officials tried to fill vacancies in their meeting schedule with what looks to me like the clear intention of preventing The Satanic Temple, specifically, from giving an invocation. Imagine the outcry if they had behaved this way to a request from a synagog, mosque, or LDS church.

“By the City Council’s own statements,” says Attorney Stu De Haan. “It’s clear that their refusal to allow The Satanic Temple to speak was motivated by their intent to discriminate against a minority religion.”

TST Spokesperson and Co-founder Lucien Greaves adds: “It’s disheartening when public officials can display such a flagrant disregard for the most foundational bedrock principles of Constitutional Law while acting upon their personal biases at the expense of their taxpayer base, who are ultimately left to pay the legal costs for the ignorance of their Mayor and City Council.”

This situation has come to be colloquially known as “Lucien’s Law”; a term coined back in 2014 by David Williamson of the Central Florida Freethought Community which is basically an assessment of how governments react to The Satanic Temple’s requests for inclusion. According to the adage governments react to these requests by either closing open forums to prevent TST inclusion while preserving some semblance of fairness (i.e, ‘I don’t want you to have my toy so now no one gets to play with it’), or by openly censoring TST and opening themselves up to potential legal action (i.e., ‘I don’t like you so you’re not allowed to play’).

“The concept” wrote Stu De Haan in an email correspondence “is that to separate church and state protects both. With personal religious faith shielded from government intrusion while also protecting citizens from religious doctrines to which they may not subscribe, secularism has been long considered a modernization of the dark ages feudalism.”

More on this story as it develops. 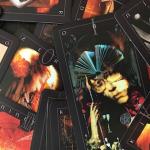 February 20, 2018
Virginia Town Freaks Out at Occult Shop
Next Post

March 2, 2018 New Reproductive Rights Claim Filed by The Satanic Temple Against Missouri
Recent Comments
5 Comments | Leave a Comment
"i remember the '80s satanic panic; a couple of british bands at the time [particularly ..."
Griff Pryce Guest Post: A Satanist Explains Why ..."
"Musta had some Lizard People working behind the scenes..."
Cozmo the Magician Faced With Losing Accreditation For Conspiracy ..."
"How were they even accredited in the first place?"
WMDKitty -- Survivor Faced With Losing Accreditation For Conspiracy ..."
"Holy smoke. The madness continues. What will it take to exclude these lunatics from real ..."
Jim Jones Faced With Losing Accreditation For Conspiracy ..."
Browse Our Archives
get the latest from
For Infernal Use Only
Sign up for our newsletter
POPULAR AT PATHEOS Nonreligious
1