Opinion: Church of Satan’s 11 Rules Should Not be Appropriated

Opinion: Church of Satan’s 11 Rules Should Not be Appropriated December 9, 2018 Jack Matirko

As a member of The Satanic Temple (TST) I’m not always on the best of terms with the Church of Satan (CoS). The organizations have a tenuous relationship which basically amounts to the CoS saying ‘we were here first’ and TST saying ‘no one cares’. The rivalry is most prominently displayed in online social media forums where members of both groups bicker at each other over issues of legitimacy. None of this is of any consequence to people who don’t call themselves Satanists but the gist of it is that CoS likes to claim to be the arbiters of what is and isn’t Satanic, and asserts that TST’s political activism is antithetical to their beliefs. Members of TST, on the other hand, tend to think that CoS’s canon is (at best) outdated and much in need of revision or (at worst) deeply flawed.

In any event, both groups make every effort to explain that they aren’t affiliated or in any way associated with each other. Both groups find it frustrating when they are confused for one another in the media, and no one in either group is interested in taking credit or blame for the actions or statements of the other.

Like All Religions, Satanism has Denominations that Don’t Get Along

While CoS may find it distasteful that TST and its members identify as Satanists because of philosophical disagreements, one must point out that TST has always been very clear about presenting their own message and taken great care to be clear about their beliefs and who they are. It is unfortunate that many continue to confuse the two groups; but the only solution is to just keep correcting those misconceptions. Personally, I even tend to empathize with CoS’s frustration when cursory media research causes confusion. After all, if you ran a Burger King it would be really tedious if people kept sending you letters to say how much they loved your Big Macs and asking for your secret sauce recipe. On top of all of that, both groups have to deal with even more woefully uninformed people who fail to understand that Satanism is non-theistic and keep asking about how to sell their souls, join the illuminati, or curse their enemies.

However, a recent story from Nebraska in which a group of completely unaffiliated activists want to use the Church of Satan’s 11 Satanic Rules of the Earth as a form of political protest is an entirely different matter.

As reported in the Cherokee Tribune and Ledger-News and picked up by Patheos’ own Friendly Atheist, the Adams County Board of Supervisors’ decided on Tuesday to erect a sign stating “In God We Trust” in their local county courthouse.

These sorts of pushes by theists and theocrats to encroach on the public square is a matter that both TST and CoS have opinions about, but very substantially different methods of dealing with. TST, of course, very famously asserts that if religious materials of any sort are allowed into a public forum then any and all religious materials must also be allowed, so they strategically submit their own Satanic materials to participate in such public forums. Conversely, it is the opinion of CoS that religions should not participate in government at all (even when other religions do) and so they maintain a very apolitical stance that does not engage in such involvement.

I am not writing today to hash out whether TST or CoS has a better strategy or debate issues of legitimacy. But this Nebraska story is unique in that the group who is attempting to counter Adams County’s ’in god we trust’ sign are not claiming to be Satanists of any kind, and in fact chose a Satanic display specifically to insure any anger regarding their display would be directed towards the Church of Satan expressly because it diverts that anger away from themselves.

As Margret Marsh, presumed lead organizer of the effort, said in the initial news report:

“None of us know any Satanists,” she said. “We didn’t want to choose a faith that we know there are people in our community that are practicing and have them become a target of any sort of campaign of people who are displeased with our action.”

I reiterate here that I have no affiliation with the Church of Satan, and it certainly isn’t my place to tell them how to run their organization. However, I find it very odd that CoS responds to any news about The Satanic Temple with alarming alacrity to point out that the groups are in no way affiliated, yet when another group unceremoniously appropriates a piece of CoS’s own canon and foundational text they have remained woefully silent on the subject. What’s more, for a group that repeatedly champions the strict confidence with which they maintain their membership for fear of attack, it is more confusing still they would remain so silent when a group uses them as a scapegoat for potential reprisals just to make a point.

Say what you want about TST, but they’ve never pretended to be CoS and they shoulder the burdens of their own actions to the best of their ability despite ill-informed media confusion.

One can’t say the same about this group from Nebraska that, no matter how well-meaning, is intentionally using the Church of Satan’s foundational beliefs to further their own objectives while simultaneously directing hatred and possible reprisal toward the very group whose beliefs they are appropriating. That is simply not ethical, moral, or just. It is tantamount to someone being mad at a coworker, so they send them nasty messages from another coworker’s email account because they don’t want to get blamed if it gets reported to Human Resources. It is all well and good to assert your rights in the public square, but it’s quite cowardly to pretend to be someone else so they get blamed if people get mad.

Satanists have long been the subject of conspiracy, scapegoating, and finger-pointing even without this sort of misguided cultural appropriation. In an age where dark money from religious organizations already has such outsized influences on our public life and politics, it is of no value to any proponent of a secular state to muddy the waters yet more by trying to use a minority religious organization’s beliefs for your own, unrelated, cause. If you are, as William Blake said of Milton, ‘of the devil’s party’ then have the decency to own it and not pretend to be advocating on behalf of an organization you aren’t to intentionally deflect criticism from yourself.

CoS has issued a response. 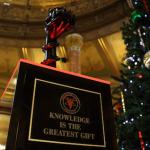 An Evangelical Site Tries Hard to...
Roll to Disbelieve
Related posts from For Infernal Use Only