Efforts from two Satanic organizations seek to extend the now yearly trend of Satanic displays in government free speech zones that are annually established for religious and holiday displays.

Public Forums are for Everyone

Government limited forums must be open to all religious displays; it has become an annual custom for religious groups of all persuasions to muster support to have their own displays alongside other religious displays like nativity scenes and menorahs to demonstrate equality and plurality in our secular nation. This year is no exception.

Last week we reported on the issues Satanic Bay Area is having with their holiday tree display in San Jose. However, The Satanic Temple (TST)- Chicago chapter just installed their monument this weekend, and the West Michigan Friends of TST is trying to raise the funds to have their own holiday display monuments built as well.

As you may remember the now defunct TST-Detroit had for several holiday seasons erected a Snaketivity display on the Michigan State Capitol lawn to counterbalance the Capitol ground’s allowance of a Christian Nativity scene. This year, members of TST-Chicago designed and built their own monument around similar themes which was brought to life by chapter members Rosa Posa and Holiday Gerry. The monument was put on display in the Illinois State Capitol Building over the Weekend, and will be available for viewing through December.

The original Snaketivity played on the Biblical Adam and Eve story, depicting a Leviathan Cross, in which a coiled serpent formed the infinity symbol component of the sigil along with an apple and book. It was also inscribed with the words “The Greatest Gift is Knowledge”.

As you can see from the photo above, TST-Chicago’s monument is playing with similar themes, wherein the snake is coiled around a hand that holds the apple aloft. It further strengthens the idea of the fruit of the tree of knowledge as a gift to humankind. If I may put on my art critic hat for a second, I think it’s a lovely and striking sculpture. They also changed up the wording on their monument’s accompanying plaque to read “Knowledge is the Greatest Gift”, and I can appreciate their abandonment of the passive voice as a subtle reference to a refusal to passivity in the face of injustice.

“I think the fact that TST Chicago members are creating the sculpture has had a big impact for the folks donating.  We have provided updates with in progress images throughout the campaign, so donors and potential donors can see where their funds are going, and share our excitement as each stage is completed. Chicago’s Snaketivity display has been in the works for about 2 years now, and was the first action we began to develop back in 2016 when Chicago was still an unofficial chapter.  Seeing it all come together now is thrilling, and a perfect way to book end our first year as an Official Chapter of The Satanic Temple.” – Lex Manticore Co-Chapter head TST-Chicago

From the ashes of TST-Detroit, a new group that is not yet a TST chapter but wishes to participate in the annual holiday festivities has struck out to replace their state’s Snaketivity with a brand new monument they are dubbing the Star of Reconciliation.

According the the GoFundMe for the monument, the group has secured private funding for the construction of the monument but is still seeking to raise money for transportation of the sculpture to the Capitol grounds through December 15th. This monument seeks to be a departure from the Snaketivity theme, opting instead to envoke the more ‘traditional’ (if such a word is applicable to Satanism) themes of the pentagram and Baphomet (evoked in spirit, see concept image below).

I asked the group about the new symbolism of their monument, which they are working to produce in conjunction with Technically Timeless, LLC.

“As a group we decided that we wanted to allow an artist full latitude in realizing their personal vision of a Satanic Monument.  Our original intent was to review multiple proposals, but due to time constraints and the quality of the first proposal, we saw no reason to delay.

In their proposal, Technically Timeless LLC described the symbolism of their display as follows:  “A nearly complete halo will connect the horns and ears but stop at the bottom to represent the inherent imperfection of the material form but also allowing the mouth of Baphomet to interact with the base to indicate the sharing of worldly knowledge.  The Base will be square for the four seasons, but oriented diagonally to the head for the directions of the compass without implying directional orientation, for none follow the same star on their path.  It will also be stepped to represent the climb of self reliance and efforts to achieve illumination from the torch of knowledge.”

Why Satanic Holiday Displays at all?

Much like the pending Baphomet lawsuit in Arkansas, Satanic displays are an open attempt to participate in the plurality of American culture. The equal protection of religions demands that where the government allows religious speech from one group, it must, in the interest of neutrality, allow other religions the same opportunity. Many feel that it is trollish to push for such monuments, but it really is about equal access to state sponsored venues. As The West Michigan Friends of TST said in a message to me:

“The Snaketivity and Baphomet are symbols that resonate with the Satanic ethos, but we don’t consider them to be integral.  These symbols are representations of our beliefs, but our beliefs would not change or diminish without these symbols. Just as one does not require a cross to be Christian, we do not require an inverted pentagram or Luciferian Cross to be a Satanist.  What this display [the Star of Reconciliation] does represent though, is our determination to assert our equal rights under the law. Rebelling against the status quo is very much a part of the Satanic ethos, turning the other cheek is not.  So when a Christian (or other religious) holiday display is placed on government property, then I find it integral to our beliefs that we demand our equal inclusion.”

So … Happy Holidays one and all. 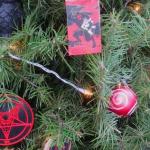 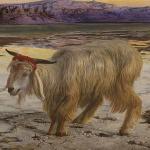 December 9, 2018 Opinion: Church of Satan’s 11 Rules Should Not be Appropriated
Recent Comments
1 Comment | Leave a Comment
Browse Our Archives
get the latest from
For Infernal Use Only
Sign up for our newsletter
POPULAR AT PATHEOS Nonreligious
1