In a 72-20 vote the Arkansas House voted today on a bill that will almost totally ban abortion in the state in the event the US Supreme Court overturns Roe v. Wade. 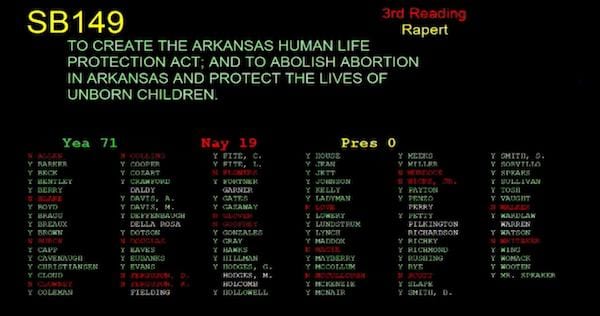 As we reported last week this bill, SB149 passed the Arkansas Senate last week, spearheaded by State Senator Jason Rapert. The story struggled to gain media attention, having been overshadowed by Rapert’s dust up with a heavy metal band flier.

Arkansas Times reports the bill only had one Republican House member oppose the bill, saying that id didn’t provide exceptions for cases of rape, incest, or in instances of severe fetal deformity.

“When it hits your own family it takes on a totally different meaning,” said Rep. Dan Douglas, noting his personal experiences with a niece who had to face such a decision. “There’s something called humanity and stopping suffering. This bill goes too far.”

“Who are we to sit in judgment of their decision, or their God above!” Douglas added.

#SB149 is extreme legislation that would make virtually all abortions illegal in Arkansas. Abortion is a safe and legal procedure accessed by 1 in 4 American women in their lifetime. #arpx #arleg

Thousands of women lost their lives to unsafe abortions before Roe. Since the legalization of abortion, it has become one of the safest medical practices in the US. #SB149 will not ban abortion – it will only ban safe abortions. #arpx #arleg

SB149, if enacted by the overturning of Roe, would also ban any method of birth control administered after the point at which a pregnancy can be scientifically detected. The law makes providing an abortion, except in emergency situations to save the life of the mother, a felony punishable by a fine up to $100,000 and a prison sentence of up to 10 years.

The bill will now be returned to the state Senate, and then go to the Arkansas Governor Asa Hutchinson’s desk for his signature. 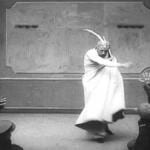 February 18, 2019 The Dominionism Series-Part 4: Christian Reconstructionism and the NAR
Recent Comments
13 Comments | Leave a Comment
Browse Our Archives
get the latest from
For Infernal Use Only
Sign up for our newsletter
POPULAR AT PATHEOS Nonreligious
1