Hail Satan? Is a Poignant Look at the Birth of The Satanic Temple

Hail Satan? Is a Poignant Look at the Birth of The Satanic Temple March 20, 2019 Jack Matirko

After some back and forth with the folks at Magnolia and calling in a little help from the film’s producer Gabriel Sedgewick, I was able to score a review copy of Penny Lane’s (Our Nixon, Nuts!) new documentary ‘Hail Satan?’ which documents The Satanic Temple’s (TST) early years right up through somewhere around August of 2018.

The film has its Massachusetts premiere tonight in Cambridge (sold out show) and will be opening in theaters around the country over the upcoming weeks.

An Entertaining Review of The Satanic Temple’s rise to Notoriety

The odd thing about me trying to review this film is twofold. In the interest of full disclosure I do have a couple brief appearances, but they’re not really substantial so I don’t think that particularly affects my take on it. On the other hand since I’m so steeped in TST’s community it is a bit hard to be unbiased so I’m not really going to try.

I do, though, find myself thinking about all the events and behind-the-scenes happenings that lead to the parts of TST’s journey which made their way to Penny’s camera. For me at least, the very notion that the film exists and that so many of my very good friends are featured in it gives me a pretty unique lens through which to watch it.

Fun to See Through Fresh Eyes

For people who are unfamiliar with TST, or even for members who weren’t following the early exploits of the Lucien Greaves & company, Hail Satan? does a great job of capturing the mood and spirit of those early events. Those of us who have been following TST since they first made news with the Rick Scott Rally in 2013 will appreciate that the film’s narrative is spot-on and highlights of the group’s biggest news making campaigns.

That’s a lot to try and fit into 90 minutes while telling a compelling story so not everything made it in, but not in a way that it feels like anything is missing. Part of that is due to just how much stuff TST has managed to get done in just six years.

Following a brief jaunt through the history of modern Satanism with some archival footage featuring Anton LaVey and the Church of Satan along with a tidy review of the Satanic Panic in the 1980s, Hail Satan? guides viewers through the Pink Mass, the Reproductive Rights lawsuit in Missouri, TST-Arizona chapter’s invocation fight with the City of Phoenix, and the history of TST’s Baphomet statue from Oklahoma to the Arkansas Rally. There’s even footage interspersed from 2017’s Los Angeles ritual, Menstruatin’ with Satan, After School Satan Club, the Arizona Adopt-a-Highway and TST-Santa Cruz’s Adopt-a-Beach, and last year’s Grey Faction protest with TST-Chicago and TST-Indiana.

Some of those actions are a little tricky to spot for someone who wasn’t there to know which is which, but like I said when the Trailer came out I’ve been crossing paths with Penny and Gabriel at these things for years.

Over on his Patreon when Lucien Greaves reviewed the film he said:

“I’m simply too close to the film to have an objective appraisal of it. None of the outcomes in any of the events covered were unknown to me. I lived it. While I feel my own viewpoint is obvious and justified throughout the film, who can take seriously my own verdict that I’m vindicated in anything?“

That’s a fair point. Covering TST in depth for the last two years here on the blog does make it hard to know what someone who is learning about TST for the first time will be surprised by. The people the film spotlights don’t strike me as a novel group of counter-cultural misfits because I have brunch with them.

I can say that it portrays them honestly. No one is mischaracterized and the film went to great lengths to illustrate how sincere these people are about what they’re doing.

Grey Faction and the Protect Children Project seem to get left a bit to the wayside, but given how complicated the issues surrounding those TST projects can be it would’ve really bogged down the narrative to delve into them.

Having been around TST for most of the time the film spans it makes for an almost nostalgic look back on not just how quickly TST has grown also but how it changed over time as new members joined and other members moved on. All of that is, honestly, a bit inside baseball for the average viewer though so I wouldn’t expect it to have that effect on everyone.

You Should Check it Out

I think for people in the larger secular and Atheist world who frequent the blogs here at Patheos there’s still a lot of misconceptions about what TST is and does that the film does a great job of clearing up. It also makes the point very clear that the organization isn’t going anywhere and that Satanism continues to be a growing component of the larger discussion on religious freedom, Church/State separation, and free-thought. It’s as in-depth as one can possibly pack into 90 minutes and gives TST the fair shake I think is long overdue.

Screening information for Hail Satan? is available on the film’s website. 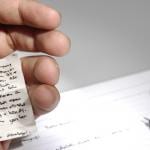 March 15, 2019
Are We Really Surprised By College Admission Scams and Cheating?
Next Post

March 20, 2019 Professional Conspiracy Theorists & Licensed Satanic Panic Supporters Gather For Conference In NY
Recent Comments
1 Comment | Leave a Comment
"I really enjoyed reading that, thanks & good words!"
Jane Dough Satanist’s Open Letter Reply to Trump’s ..."
"Your looking at it wrong. They upheld the the thought process the rights of Christians ..."
shy guy Judicial Hypocrisy in Dismissal of Satanist ..."
"I wanna be a white male with a ‮gav‬‎. This way I can have donny ..."
Cozmo the Magician Judicial Hypocrisy in Dismissal of Satanist ..."
"There's a philosophical issue. For one, "life" and "personhood" are not the same thing."
Daniel Goldman Judicial Hypocrisy in Dismissal of Satanist ..."
Browse Our Archives
get the latest from
For Infernal Use Only
Sign up for our newsletter
POPULAR AT PATHEOS Nonreligious
1