It shouldn’t come as any surprise that here at For Infernal Use Only we’re spending a lot of time keeping up with all the media coverage of Penny Lane’s “Hail Satan?” documentary because … well because it’s probably the most notable thing to happen to Satanism for the last 30 years at least. Penny Lane’s interview on this week’s Penn’s Sunday School is a notable event though.

I’ve always liked Penn, we differ a little bit because he leans a lot more libertarian than I do politically, but one thing he’s always gotten “right” as far as I’m concerned is his stance on free speech, most notably demonstrated in a clip from Showtime’s Penn & Teller’s Bullshit:

I love that clip because it telegraphs the discussion about ‘deplatforming’ we’ve seen on college campuses of late by several years. It’s also funny while it questions the notion of speech-codes, which (for me at least) helps. If there’s anything I’ve learned talking to comedians and working with Andy on our podcast over the last few years it’s that comedy is often the last refuge of the sensible.

Full Disclosure, Penn’s Name is in the Credits

If I’m doing my full duty here as a recorder of fact I have to point out that Penn Jillette does have a “Special Thanks” credit in the Hail Satan? credits, but honestly that could mean anything, maybe he just put Penny Lane onto some angel investors. It’s notable though because somehow or another it’s clear that his opinion of the film isn’t entirely unbiased. On the other hand though, Penn has always struck me as someone who isn’t ashamed to call out hucksterism when he sees it. So it’s refreshing that he doesn’t merely call out The Satanic Temple as just a P.T. Barnum-esque stunt. And Penn knows P.T. Barnum. He’s a graduate of the Ringling Brother’s and Barnum & Bailey Clown College. That may not sound prestigious, but only around 1,400 people ever did. Certainly more people have graduated from the same program I went through in my college years. I’m getting off track though.

The point here is that I think deep down Penn Jillette understands, by way of his clowning, the impetus that causes people to put on horns and extravagant makeup when going to a Satanic ritual. Clowns are very particular about their makeup; so are Satanists. The Satanic Temple’s legal council Stu De Haan is very particular about what his ritual makeup looks like. I am too. (My ritual makeup is basically Pagliacci’s, if a clown can’t relate to that I genuinely wonder what business they have clowning.)

All of This is Beside the Point, Let’s Get to the Interview

You can listen to the interview while you finish reading my nonsense here:

Now to be clear, Penny Lane is a very sympathetic documentarian, so she’s become a clear ally in The Satanic Temple’s (TST’s) overall struggle, so between that and whatever Penn’s ‘Special Thanks’ credit actually means this isn’t a completely unbiased interview. But I would argue that no interview ever really is, especially when it’s a podcast by a notable celebrity who has never been shy about his political positions and a documentarian who has obviously seen enough of what TST does to be sympathetic.

That said, both Penny and Penn are secular atheists, and it’s interesting to hear them grapple with the implications of Satanism as a religion. Penny, for her two cents never felt the need for the catharsis that Satanism provides because she raised in a secular environment.

Penn, I think, recognizes the  aims and goals of TST but just draws his lines on what is an isn’t a religion a little differently. I think he recognizes the appeal of the community, the sense of showmanship, and the ritual dress-up. Just for him that’s not Satanism, that’s Clowning and he thinks of that as a vocation instead of a religion. That’s fine. But Penn is also a stanch Libertarian and I’m fairly sure if he could register as Clown clergy and claim his Vegas magic shows are a religious revival so he didn’t have to have to pay income taxes on those earnings he would do so in a heartbeat.

“One thing that’s interesting about Satanists, and again I’m not trying to make them sound perfect because they are just people and I’m the first to tell you they have some pretty crappy social skills. I’m not … really I’m really not trying to paint them these perfect people. But at the same time like, again y’know interviewing them and asking them questions about how they came to be who they are, like every single one of their kind of origin stories as a Satanist involves a bookstore or a library. I mean these are like some of the most well-read, kind of knowledge hungry rational like real thinkers, y’know?” – Penny Lane

Honestly, if that’s what Penny Lane has come away from her experience making a movie about Satanists with … I’m perfectly content with that. I’m more than content! It gives me a generally warm and squishy feeling that Satanists are making their point! Yes, that is also my experience of these people, and I love that about them, and why I find kinship with them. That’s why I’m here.

Hail Satan is making its theatrical debuts around the country this week. Check it out. 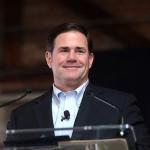 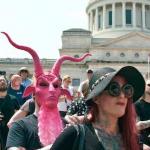 April 24, 2019 The Satanic Temple is Now a Registered Tax-Exempt Church
Recent Comments
13 Comments | Leave a Comment
Browse Our Archives
get the latest from
For Infernal Use Only
Sign up for our newsletter
POPULAR AT PATHEOS Nonreligious
1

An Evangelical Site Tries Hard to...
Roll to Disbelieve
Related posts from For Infernal Use Only