The US Naval Academy Will Host Satanic Services, According to The Satanic Temple

The US Naval Academy Will Host Satanic Services, According to The Satanic Temple October 13, 2019 luciengreaves

It happens all the time. At least, it happens far more often than you would expect, if you tend to assume that lawmakers and public administrators must have at least the most rudimentary understanding of Constitutional Law. What happens is this: The Satanic Temple will ask for equal access to some particular benefit afforded to religious organizations only to find ourselves denied on clearly spurious and openly hypocritical grounds that can not possibly stand up to legal scrutiny.

A recent denial from the United States Naval Academy (USNA) attempting to bar members of The Satanic Temple from organizing to hold services is particularly egregious, incoherent, and insulting. While acknowledging that The Satanic Temple is a federally-recognized religious organization, a spokesperson for the USNA nonetheless suggests that the Temple is a partisan political group and, as such, can be denied the right to perform services. Puzzlingly, midshipmen Satanists’ right to form a “study group” is unquestioned, which raises the question of what type of political group would request to perform religious services to begin with and, if they are allowed a study group, what is the problem with allowing those services anyway? I would be interested to see a policy that allows partisan political groups to organize at USNA, but for some reason denies them the ability to perform religious services… because the religious rites are too political(?!).

It would also be very amusing to see the USNA try to cohere a policy of selective exclusion against religious organizations that are involved with lobbying or religious liberty litigation. Most, if not all, major religious organizations would be barred from performing services. We have sent a letter to the USNA requesting that they correct the erroneous decision reported by their spokesperson. Below is our press release:

After the US Naval Academy publicly suggested that Satanic services would be barred, The Satanic Temple promises litigation should the religious liberty of their members within the academy be impeded

The Satanic Temple (TST) has announced its intent to see that Satanic services at the US Naval Academy are given equal treatment afforded to all religious denominations and will initiate legal action if TST is discriminated against. This announcement comes in response to a public statement given by academy spokesperson Alana Garas last week. Garas stated that members of TST, who are actively seeking to organize services at the academy, would be allowed to maintain a “study group,” but not to hold services because TST is “a non-theistic religious and politically active movement.” TST spokesperson Lucien Greaves said, “Neither of these facts about TST disqualifies our members from holding services.”

“The notion that members of The Satanic Temple within the Naval Academy can be denied the right to hold services because we are non-theistic and/or politically active has absolutely no credible basis in law or common sense. The Satanic Temple is no more a political cause than the Catholic Church or Southern Baptists. Superstition, or theism, is not a prerequisite for recognition as a religion and, in fact, The Satanic Temple is officially recognized by the US government as a Church. If the Naval Academy wants to ban Midshipmen of a particular belief from holding services because their Church speaks to social issues of political relevance, they will be obligated to deny the services of Catholics for their Church’s political lobbying against abortion, the services of LDS-affiliated Mormons for their political activism related to gay marriage, and most every Protestant denomination for both.”

In explaining her comments regarding The Satanic Temple, Garas stated, “in accordance with Department of Defense Policy, military members will not engage in partisan political activities, and will avoid the inference that their activities may appear to imply DoD approval or endorsement of a political cause.”

Greaves asserts, “The spokesperson is either deeply confused in differentiating religious services from partisan political activities, or, more likely, attempting to disguise discrimination against a minority religion by insisting that it runs afoul of wildly unrelated standards of conduct. All members of the military, and those within the Naval Academy, have the right to practice their religion, as well as to refuse participation in any and all religious services. For anybody in the Naval Academy to suggest otherwise is an insult to those who serve, and to those who care about our fundamental freedoms.” 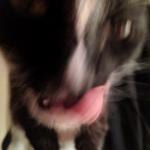 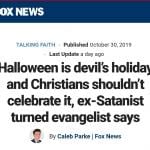 October 31, 2019 Fox Offers Superstitious Evangelical Horror Fiction as News
Recent Comments
5 Comments | Leave a Comment
Browse Our Archives
get the latest from
For Infernal Use Only
Sign up for our newsletter
POPULAR AT PATHEOS Nonreligious
1

MLMs' Future: LuLaRoe and Its Pyramid...
Roll to Disbelieve
Related posts from For Infernal Use Only