Greetings from The Satanic Temple (TST)! We were very pleased this weekend to learn that you had recently publicly prayed for God to induce miscarriages in Satanic pregnancies. At a time in which Satanists have had to fight desperately to retain their bodily autonomy in the face of increasingly restrictive anti-abortion laws, we are glad that your “logic” must necessarily lead you to support unrestricted abortion access for Satanists seeking to end unwanted pregnancies! I am writing to ask you to take a bolder step in the name of your faith, and lend your support to our Religious Reproductive Rights campaign which seeks to invoke religious exemptions from abortion restrictions on behalf of Satanists.

Consistent with our tenets, which call for bodily autonomy and acting in accordance with best scientific evidence, TST religiously objects to many of the restrictions that states have enacted that interfere with abortion access. TST is taking many steps on behalf of our members and those who share our beliefs to establish exemptions from laws that do not promote the health and safety of patients and violate our conscience and beliefs.

As you know, more than half of all abortions in the United States are sought by Christian women, while 38% are sought by the nonreligious, and only 8% are sought by women who belong to a non-Christian religion. So it is especially forward-thinking of you to single out Satanists as deserving of expressing the reproductive freedoms they champion. While the Satanic Temple is officially nontheistic, we do hold as one of our central tenets that, “One’s body is inviolable, subject to one’s own will alone.” We are delighted to learn that you share that view.

We are impressed at your integrity in boldly supporting our reproductive rights, especially as many of your cohorts dishonestly equate abortion with “baby killing,” a notion completely at odds with science. It will not come as news to you that, according to the Centers for Disease Control, 91% of abortions in America are performed before the thirteenth week of pregnancy, when it is scientifically impossible for the fetus to experience conscious pain. By contrast, a newly-hatched chicken is far more conscious. There is more ethical quandary in a chicken sandwich than in a first-trimester abortion.

It was a true relief to all of us at The Satanic Temple to see you in particular defending our health care rights, as we know that you will put your substantial fortune where your mouth is. While exact figures are unknown, you are estimated to carry a net worth of roughly $5 million. The average abortion is roughly $500. Thus, ten of our members could exercise their Constitutional (and, as you see it, God-given) right to terminate their pregnancies for a mere $5,000, or roughly 0.1% of your estimated  net worth.

You may send a check directly to our headquarters:

Yours in justice and freedom, 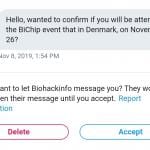 November 19, 2019
The Most Elaborate Display of Ineptitude I Have Ever Witnessed: The BiChip Hoax
Next Post

February 5, 2020 The False "Survivor Advocates" Whose Incompetence Helped Weinstein's Defense
Recent Comments
94 Comments | Leave a Comment
Browse Our Archives
get the latest from
Nonreligious
Sign up for our newsletter
POPULAR AT PATHEOS Nonreligious
1