On June 09, the United States Court of Appeals for the Eighth Circuit upheld a lower court’s dismissal of a claim brought by The Satanic Temple against the State of Missouri challenging medically unnecessary laws that force anybody seeking an abortion to accept literature proselytizing the religious position that “the life of each human being begins at conception. Abortion will terminate the life of a separate, unique, living human being.” To add injury to the insult, Missouri demands that after this commentary is received — on-site and in person — one must then wait 72 hours, in hopes that this understanding of human life is fully pondered, before finally able to undergo the procedure.

The decision, handed down by the overwhelmingly conservative Eighth Circuit, which states that the Missouri “informed consent” law is not “anything other than ‘neutral’ and ‘generally applicable’” harkens back to an earlier conservative position outlined by former Justice Antonin Scalia who, in speaking for the Supreme Court in 1990, rejected the argument that the 1st Amendment allowed for religious exemptions from general laws that apply to everyone. However, the argument is rendered laughable in 2020 after the Supreme Court has, more recently, decided that businesses could claim exemption, on religious grounds, from offering insurance that covers contraception options for employees (regardless of the employee’s own religious convictions). Even an opt-out form offered to Religiously affiliated non-profit organizations, churches, and other houses of worship that would compel the insurance company to provide coverage to employees directly was considered too much of a burden to “religious liberty” advocates who argued that the mere checking of a box was far too much an imposition against the Christian conscience.

The Eighth Circuit’s time travel is, of course, selective. Where we argued that states may not adopt and impose a “theory of when life begins,” the court adjudged our citations outdated, declaring that “At one time, this argument had legs. […] The Supreme Court clarified in Webster II that states still have a role to play on this issue. Webster II, 492 U.S. at 506 (‘Roe v. Wade implies no limitation on the authority of a State to make a value judgment favoring childbirth over abortion.’”

Despite this seemingly less-than-neutral reliance on precedent, our representing lawyer, James MacNaughton, still feels that the court might have been forced to a different decision if they had not chosen to to entirely disregard certain of our arguments. He explained:

The Court applied the “rational basis” standard to the discrimination in the Missouri Lectionary and found the State could discriminate because the statute was “neutral” and “generally applicable.” The Court refused to consider the arguments that 1) the Informed Consent Statute violates the “undue burden” standard established in Planned Parenthood v. Casey; or 2) that this is a “hybrid rights” case.  The Court said those claims were not specifically alleged in the complaint as separate counts.

And in case the court’s pretense to neutrality in approaching a religious liberty claim brought to them by Satanists wasn’t already farcical enough, in a footnote to the ruling, it states, “According to [plaintiff, Judy] Doe, the Satanic Temple has both ‘politically aware Satanists’ and ‘secularists and advocates for individual liberty’ among its members. (Emphasis added). Arguably, her own description raises the possibility that her beliefs about abortion may be political, not religious.”

Not only is this laughable and absurd given the countless numbers of “political” claims for “religious liberty” brought to court, and often won, by Christian lobbyists seeking political advantage, with arguments they defy any credible scriptural justification, but it is also a signal of judicial incompetence that this question is inserted anywhere in the ruling at all. If the judges were confused as to whether the arguments we presented were religious or philosophical, the time to discuss that issue would have been during oral arguments when they could have asked. Without delineating between religion and philosophy themselves, they merely state their own confusion regarding terminology in a pointless confession of ignorance. If I were made to clarify, I would say that the distinction lies in the fact that our ethics and beliefs form the central identity of our community, which has developed a series of symbols, rituals, and other practices around them that contextualize our shared role in the cultural order. Our arguments for reproductive rights are directly derived from our central tenets, among them the beliefs that “One’s body is inviolable, subject to one’s own will alone,” and “Beliefs should conform to one’s best scientific understanding of the world. One should take care never to distort scientific facts to fit one’s beliefs.” While I feel that these have obvious bearing on reproductive rights issues, it is decidedly less clear where Christians gained the understanding that their bible is anti-abortion. In fact, current historians, exploring the rise of the religious right, have found that, contrary to received wisdom, the movement was not born in outrage against the Roe v Wade ruling — earlier evangelical perspectives on abortion were varied — but their original mobilizing impetus came from their desire to fight back against desegregation. It always had a particularly political smell, and of the autocratic variety.

We now live in a reality where “religious liberty” is more and more openly interpreted as the exclusive domain of Christians — whether to accommodate their prejudices against the LGBTQ community, their right to impose moralizing reproductive rights limitations upon the entire world, or to exempt them from any generally applicable legal requirements they might deem inconvenient. Simultaneously, courts scoff at the notion that Satanists seeking to terminate a pregnancy might have their freedom of conscience affronted when a state mandated 3-day waiting period is imposed upon them during which it is hoped that they will consider literature which baldly asserts religious claims contrary to their own.

As I stated to the Friendly Atheist:

… We can’t for a moment believe that our case would be so thoughtlessly dismissed, the arguments we presented so willfully evaded by the reviewing judges, if we were a Christian organization.

If there were a process whereby religious claims were sufficiently anonymized — the judges blinded to the religious identity of the plaintiff and only apprised of the pertinent legal arguments presented — there is no doubt that our situation would be entirely different today.

Of course, we will appeal. We will fight for our equality with every appeal available to us, even as the hypocrisy of the courts is made increasingly, and flagrantly, more plain.

About
Lucien Greaves is the cofounder and spokesperson for The Satanic Temple You can read more about the author here.
Previous Post 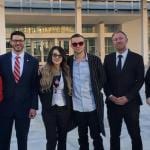 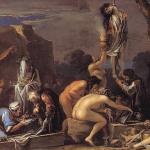 The Two Factions Forming in the...
Roll to Disbelieve
Related posts from For Infernal Use Only