Luggage in our lives can be heavy

Luggage in our lives can be heavy November 12, 2021 Mark Williams

WHAT’S WITH ALL THE DIETS?

What’s with the ketosis diet?  I couldn’t even spell the word without Google. Is that a trade name or a scientific name? I think there should be a contest where people name, document, list the diets they have been on, heard about, and eventually failed over their lives.

Like the Birch Bark Diet or the Smoked Oysters and Kale Diet, or the ever and always effective- Air and Ice Water Diet.

This morning, just now, a neighbor saw me in my office, writing to you, and sipping on my joe, and he decided I needed a bag of donut holes to go with it. Not even donut holes from a chain store, but donut holes in a white paper bag synonymous with one of those little mom and pop homemade donut stores. Frankly, my weaknesses are potato chips and maple long-johns. I would sell my country’s secrets for a maple long-john.

Don’t get me wrong, I think we can all stand to lose a little luggage, but as I sit here and write to you, sipping on my coffee with real cream and hanging out inside that gooey mind of mine, I come up with, well, this—diets. Sorry.

Stay with me. Don’t abandon me now.

I remember my coach in high school use to wear one of those plastic sweat suits which would cause you to sweat all the excess water out of your body. Of course, in Phoenix —in the summer time at an afternoon football practice, that seemed—upon reflection, a little, well-excessive. But I saw him do it and I used it when wrestling season came around. A lot of us used it over the years. And the thing was, it worked. At least for a while. Until you had that gallon of water or six beers later. If I can only keep it off! I heard myself say.

HOW DO I WANT TO BE DEFINED?

I think we all want that to not be what defines us-our looks, our weight, our income, our house, our car unless it is a socially acceptable thing. At my age, I have learned I do not want to drive a Lamborghini or even own one. I sat in one once and had to crawl out. I could drive it under the trucks carrying groceries to my store. Plus, I would never be able to get it out of second gear going to the store for said groceries. It would drive right passed it going about 160. If you own one, well done. It’s just not for me.

I get tired, sometimes, of my life and that luggage I carry so I decide on the following Monday, I will take control of my life and really do it this time, whatever that is! Maybe it’s getting a job, lose weight, stop smoking, stop the drugs, stop, stop, stop, change, change, change. We do well for a few days, then we slide back, all the time hearing Evil whisper “see? I told you you couldn’t. You will never be able to do what you want to do. The person you see in the mirror is who you are. Your life defines you. You are a failure-face it.”

And you believe it.

HERE IS A THOUGHT-OR TWO

Here is a thought. What if you were already perfect?

Hang in there with me. Let me ask again. What if you were perfect?

“Ah, Mark, helllllloooo, no one is perfect.”

Hmm, let’s do some math. Well, let’s do a math-type equation. You know-if A+B=C then B+A=C. For you math teachers out there, there is a term for that type of set up. But my coffee and cream don’t care to look it up.

God, by definition, is perfect. He made the universe. God made you and me. God makes no mistakes and in that one act of sacrificial love, nailing the son of God to a cross, he made me holy and thereby we are perfect. It’s a math thing. It’s a grace thing. It’s a love thing. Pure love.

Yeah, that was known from the beginning. I’m God’s child it says in John 1. He knew he had to give us choice in order for his plan to work.  Also, He knew choice would involve the Evil One, contaminating us and infecting us which would separate Dad from his kids. Except Jesus was the cure. He made us holy. He paid for us to be-holy.

When He bought me at the cross, I became white as snow. He sees you and I perfectly, even in the middle of our stuff, He sees us as his adopted kids, luggage and all.

You just have to accept his grace and start to believe it. Which can be extremely hard to do. It’s a gift. It is grace. You didn’t deserve it. I don’t deserve it. It was just given to you and me. With all your stuff, all your luggage. He picked you. Oh, and we cannot fall out of His love. You can swear all you want, but He will still be there, loving you.

In the middle of your firestorm, He is there and absolutely adoring you. Crazy huh?

IT WILL BE GLORIOUS!

I know you didn’t stone people to death for a living. Paul did that, before he became a believer. Yep, Dad bought him and used him to bring the rest of us knowledge about who God is. What could He use you for? Whatever it will be or was, it will be glorious and you might not even know you did it until you go home and watch the movie of your life with your brother-Jesus! All you have to do is accept His love and let it wrap around you. That, actually, was and sometimes still is, hard for me. Letting someone love me.  Right now, all Dad wants to do is go for a walk with you and talk about anything you want to talk about or nothing at all. He loves just being with you.

So, I need to let you go. The stop light is about to change and the guy behind you will honk if you don’t move. You’re not supposed to be on your phone anyway.

About Mark Williams
Mark Williams retired from law enforcement in Arizona with the Arizona Attorney General’s Office, Organized Crime Division, Special Investigations Section, after twenty-one years of service and has been teaching English in an inner-city high school since 2001, retiring in 2019. He has frequently traveled around the United States to speak about adult education and law enforcement. Throughout both careers, he has been training educators, business communities and churches on surviving active shooters with his book, Forty-Seven Seconds. Mark has authored several fictional pieces, including screenplays, short stories, magazine stories, training manuals, and novels. The Good and Kind Man is Mark’s eighth novel, coming out this fall through Leaping Armadillo Press. He has been married for over thirty-seven years, and widowed in 2018. He has three grown children, and ten grandchildren. He currently resides in Phoenix, Arizona and attends Open Door Fellowship Church. You can find out more about Mark’s writings at www.markjwilliams.com. You can read more about the author here.
Previous Post

November 11, 2021
Welcome to a calm walk through our gooey minds
Next Post

General Christian
Have You Ever had a Conversation with Your...
Inside Our Gooey Minds

General Christian
Living? Sometimes, I want Off
Inside Our Gooey Minds 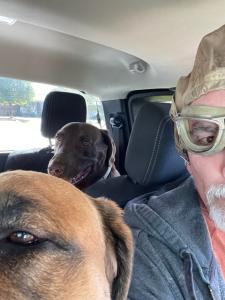