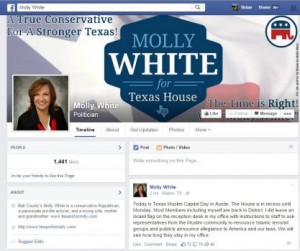 I have been a naturalized U.S. citizen for more than 25 years and a proud Texan for 22 years. But this past Thursday, I felt ashamed and offended because of the xenophobic comments by Texas State Rep.Molly White on her Facebook page.

She states, “Today is Texas Muslim Capitol Day in Austin. The House is in recess until Monday. Most Members including myself are back in District. I did leave an Israeli flag on the reception desk in my office with instructions to staff to ask representatives from the Muslim community to renounce Islamic terrorist groups and publicly announce allegiance to America and our laws. We will see how long they stay in my office.” She further states, “Remember, in the Koran, it is ok to lie for the purpose of advancing Islam. Texans must never allow fringe groups of people to come here so that they can advance their own culture instead of becoming an American and assimilating into the American way of life. That, I can assure is not the intent of most Muslims who move to America.”

Has Rep. Molly White ever read the Quran or talked to any Muslims about their beliefs? Apparently not, because if she did she would know that Islam has laid great emphasis on telling the truth. The Quran is filled with verses reminding Muslims to always speak the truth,“And confound not truth with falsehood, nor hide the truth knowingly.” (2:43) The emphasis on speaking the truth is so profound that the Quran states, “O ye who believe! Be strict in observing justice, and be witnesses for Allah, even though it be against yourselves or against parents and kindred…” (4:136) So, how can a religion that has instructed its followers to always speak the truth even if it is against themselves or their families ask them to lie? It cannot and does not.

As an American Ahmadi Muslim, my faith has commanded me to be loyal to my country of residence, which in this case is America. The Quran states, “O ye who believe! Obey God, and obey His Messenger and those who are in authority among you (4:60).  This is further reiterated by Prophet Muhammad that, “Love of one’s country of residence is part of faith.”  I have pledged allegiance to this country and am proud to be an American but according to Rep. Molly White, I have to do this again. And were I to pledge yet again, I am confused which country she wants Muslims to pledge allegiance to: America or Israel?

I was speechless after reading her comments. I couldn’t believe that in this day and age, there are public officials who claim to uphold the U.S. Constitution, which clearly grants freedom of religion, but are openly discriminating against one particular religion and its adherents. But then, I shouldn’t be surprised. Recently, Louisiana Governor, Bobby Jindal, made false claims by stating that certain parts of UK and western countries have Muslim only “no-go zones.” This was after a guest on Fox News had made allegations that Birmingham, UK had a Muslim only “no-go zones.” Fox News has since apologized but it seems that Governor Jindal is going ahead with these false allegations.

So, it seems that Rep. Molly White, Louisiana Governor, Bobby Jindal and some Fox News anchors have not bothered to read the Quran or listened to the vast majority of Muslims worldwide who have repeatedly denounced terrorism. Instead such politicians and media personalities are using their public platforms to mislead the American public by spreading lies about Muslims. This will further increase public mistrust of Muslims.

Author Qasim Rashid, recently proved this point when he wrote in a Huff Post article, “While Fox News has apologized for their “no-go zones” claim, the after-effects of their repeated lie are far from over. Lies have consequences that aren’t remedied by a simple apology.”  Bullseye!

February 2, 2015
Atheists and the blind belief in free will
Next Post

February 9, 2015 Christians Can Worship In Mosques Too
Recent Comments
0 | Leave a Comment
Browse Our Archives
get the latest from
Muslim
Sign up for our newsletter
POPULAR AT PATHEOS Muslim
1

Is The Table Spread in the...
Ask A (Born Again) Muslim
Related posts from Islam Ahmadiyya